Over the last week I returned to my Indian portraits. 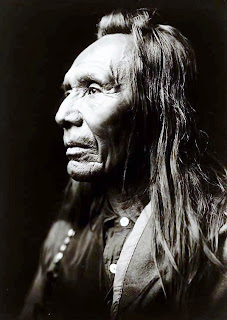 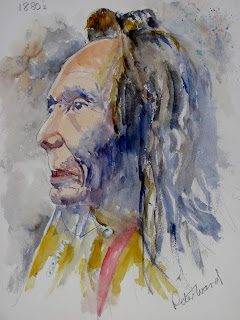 I was particularly struck with the light on this subject and his profile. After a loose but accurate drawing, using measuring to get the proportions right, After starting with the eyes, nose and mouth I then painted the shadows on the right and lower side of the face. Here I used quite dark colours, mainly Ultramarine adulterated with Burnt Sienna. For me the eyes and the nose followed by his chin were the key areas. The remainder is just supportive. The hair is a mixture of Ultramarine, Burnt Sienna and Raw Umber. There are touches of Indigo (Daniel Smith). The eyes, tip and underpart of nose, plus the chin area were the usual Cadmium Red Light, Cadmium Yellow Light, Cerulean and Ultramarine mixed on the paper. A pale wash of Quinacridone Rust (Graham PO48) was added to the face which initially I left white. A second wash was added when dry. I realise the skin is probably too light and not dark enough to be accurate for a Nez Perce but felt my approach was needed for the benefit of the painting.

The Nez Perce lived in the North West and suffered the usual mistreatment at the hands of the American government. They were not unfriendly to the white man but were eventually forced into armed conflict, and under Chief Joseph and Looking Glass made a remarkable attempt to flee to Canada with their women and children, pursued by large numbers of troops and militia. On a number of occasions they defeated the opposing forces but eventually numbers told and they were forced to surrender not far short of the Canadian border. A segment of the tribe did make it. 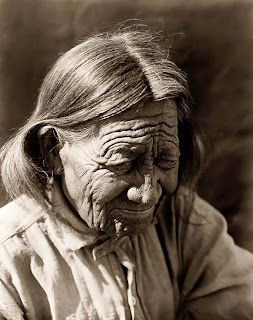 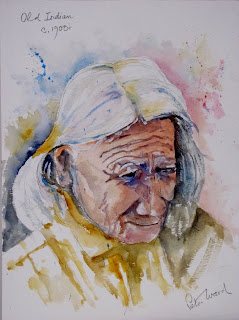 My approach  was slightly different here as a good part of the face is in shadow. I used similar colours and completed the face in stages, starting with the eyes, nose and lips. As these were all linked together I did them in one passage. I then completed the lighter side and added the various lines and grooves when  dry. I assumed his hair to be a dirty white leaving most of it the white of the paper, with just a few hints of  heavily diluted Cerulean and Quinacridone Gold (Daniel Smith PO49). The pinkish red in both instances is diluted Permanent Carmine (Winsor & Newton PR N/A).

The Arapaho were a tribe of plains Indians usually associated with the Sioux and Cheyenne but not quite so feared, although still formidable, often fighting with them.

Brushes were my usual Isabey Sizes 6 and 8 plus a Size 6 Maestro.

I really like your style Peter, it's loose and free but shows exactly the subject...very good.

Thanks for commenting Ann and your kind remarks. I'm still trying to develop things further but live in hope.

Bravo! Peter, your AmerIndian portraits just keep getting better.
I particularly love the face of the Nez Perce warrior.
Carol

Thank you Carol for your kind remarks. I was very taken with the original photograph which (I felt )was very striking and had good possibilities for a painting.

Kudos to you Peter!These native Americans portraits are superb!

Thanks for commenting Robert and your kind remarks.