I'm afraid you'll have to put up with another bird.! I missed the AVA session yesterday as I'm still suffering from a cold and accompanying cough, although this seems at last to be moderating. This is the latest subject for the Facebook community `Paint Colorful Birds For Fun'. 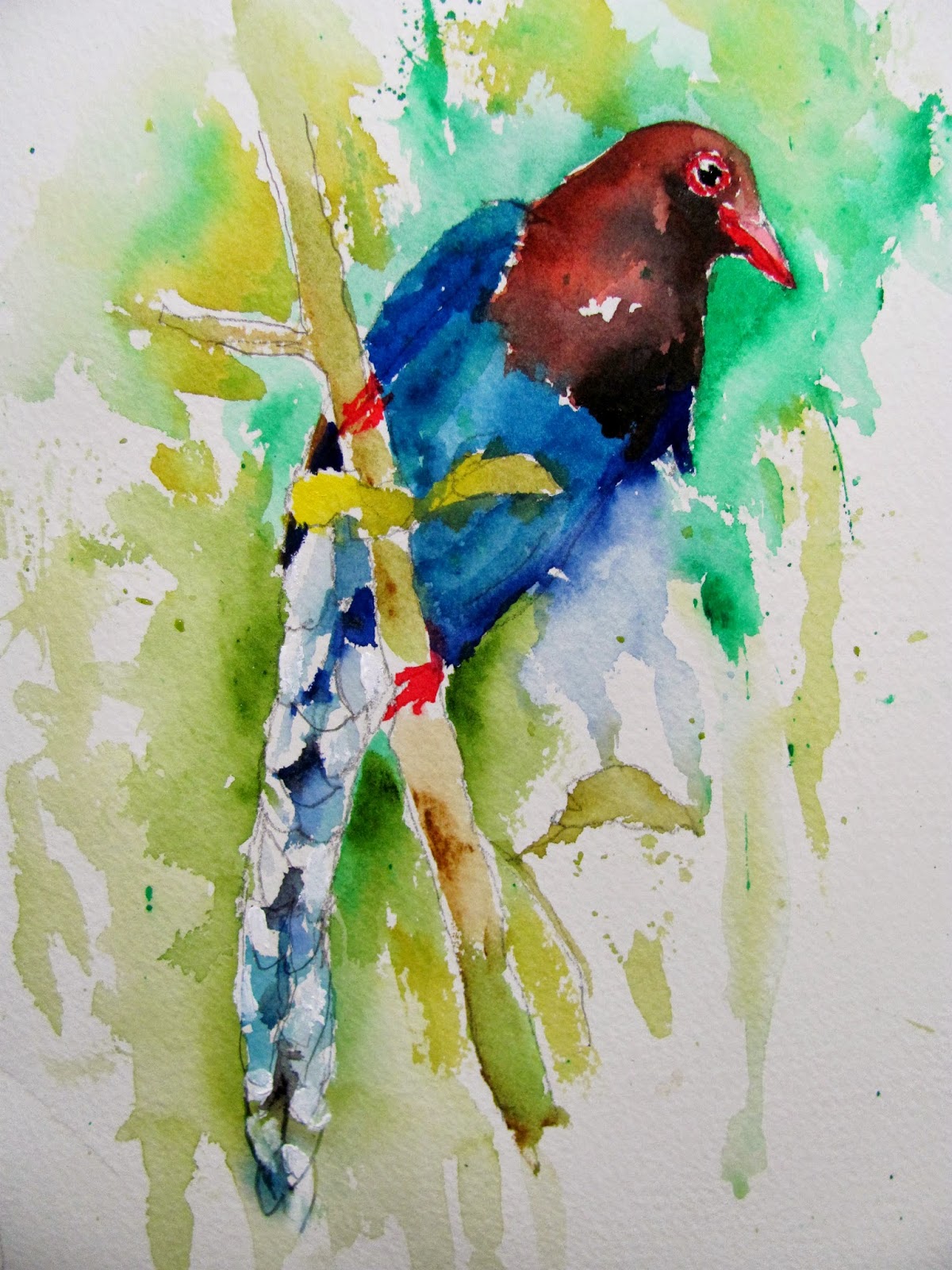 Only three brushes. The Isabey retractables sizes 4 & 6 and the Isabey Kolinsky sable Size 6.

This was last weeks subject on the `Paint Colorful Birds for Fun' community on Facebook. I've only seen these little birds in captivity but they seem to live in groups so after the initial bird on the branch added impressions of three others. 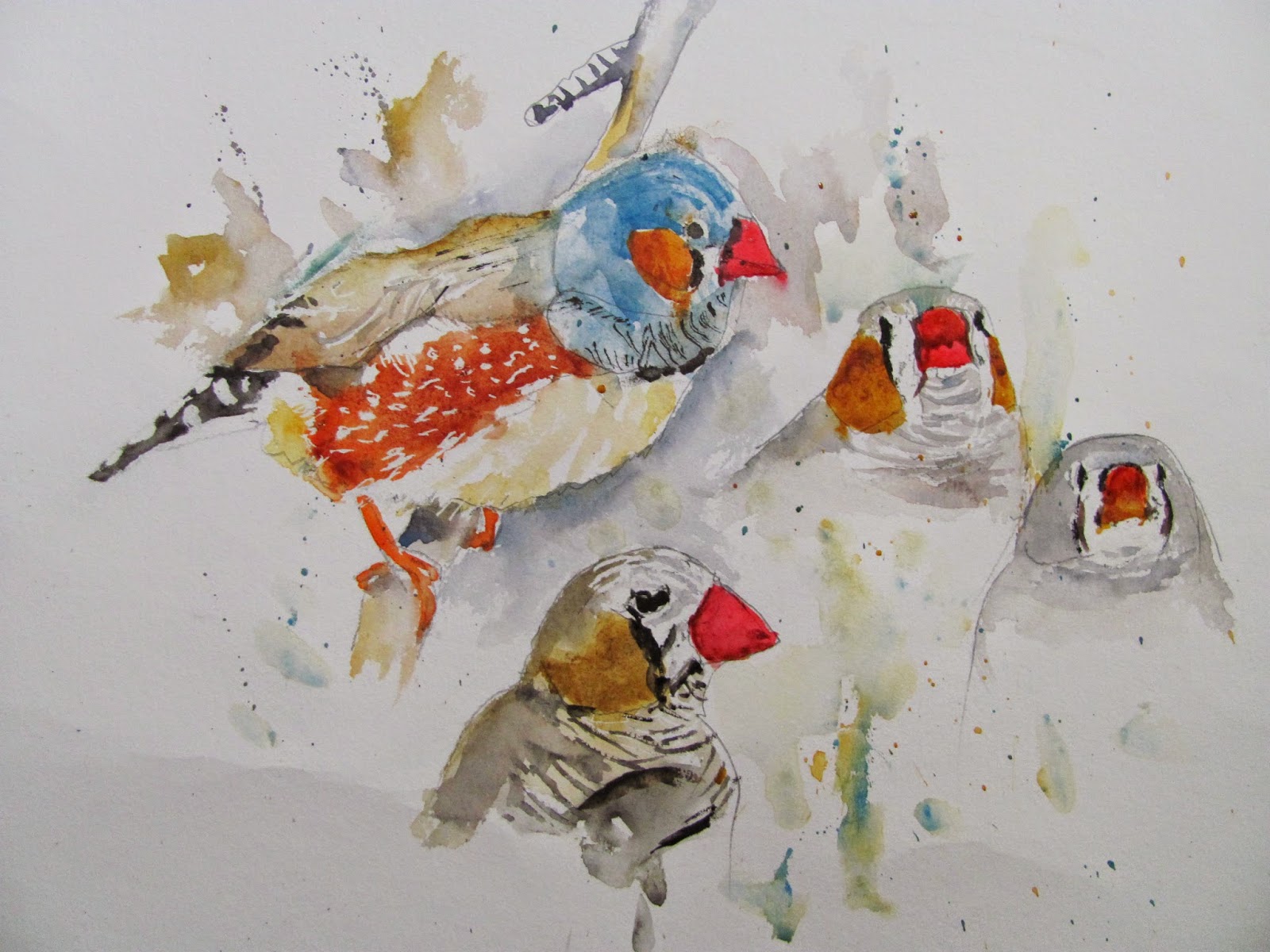 These are basically quite quick sketches so I'm fairly happy with it as it conveys what I wanted with a huddle of the birds. The great thing about these bird sketches is that they encourage bold use of colour. Not a subject for the limited palette enthusiasts.

Only three brushes, all Isabey, retractables 4 & 6 plus size 6 Kolinsky.

Winsor & Newton,  perhaps prompted by the rise of Daniel Smith, have introduced what they are calling a limited edition `Desert ' collection of 6 new colours, all single pigments with two I've not heard of previously. In addition W & N have recently changed their tube design and are now calling the range `professional watercolours'. Sounds like the marketing department has been having a field day.

They are only available in 5ml tubes and are listed in series three which makes them expensive. However Jacksons are currently charging £4.61p - still very expensive. The colours are as follows:

Phthalo sapphire. PB15:6 - This is one of the phalo blue pigments and this one is currently on offer from at least three other makers, Daniel Smith, Lukas and Schminke. All three offer this pigment, `Phthalo Blue', `Helio Blue Reddish' in larger tubes and at lower prices, apart from Daniel Smith who are expensive, at least in the UK.

Indian Red Deep. PBr25. Previously this pigment has only been available from Daniel Smith as `Permanent Brown'. Handprint say `not an essential pigment'. Ian Sidaway gives it a good review in the current magazine `The Artist' but calls them all relatively expensive `...and might put them low down on the shopping list of many impoverished artists'. The pigment database says PBr25 is `deep red violet brown'. Added 08/04/14; I have just discovered that Holbein have added a number of colours to their watercolour line. Amongst them is `Imidazolone Brown' which is PBr25. There is also Imidazolone lemon, yellow deep, and yellow. I note another new colour `Grey on Grey'. Regrettably since Handprint decided not to update pigment information we are beginning to fall behind.

Transparent Orange. PO107. ` A zingy red-orange'. I've not heard of this pigment but it sounds rather like the Schminke `Translucent Orange' PO71 and the similar Lukas `Permanent Orange' PO71. This Schminke colour is one of my favourites and also the well-known artist Jean Haines. The pigment database www.artiscreation.com/  says PO107  is `Bright reddish orange'. Added 08/04/14: The pigment database calls PO71 a `dull mid-orange'. To my eyes (and others) it is anything but dull and is certainly reddish.

Dark Brown. PY164. Another pigment I've not heard  of previously but note the `PY' which signifies yellow. Ian Sidaway says `it is used in various named browns' Which ones? I couldn't find this one in the pigment database.

Yellow Titanate. PBr24. Currently this pigment is used in the W & N Naples Yellow Deep. What is different? I've no idea and again Sidaway claims PBr24 is used in a range of different named yellows.

Gold Brown. PBk12. Again claimed to be used in a range of named browns but not in either the Schminke and Lukas ranges or previously Winsor & Newton.. The pigment database calls this `dark red to brownish yellow black'. An interesting comment is that this colour is `not dissimilar but is slightly duller than Quinacridone Gold'.

Are these colours worth buying or are they just another attempt to extract more money from  long suffering watercolour artists? You will have to make your own mind up. Winsor & Newton paints are still excellent quality and can be bought at discounted prices from the mail order suppliers. The range of colours available is daunting and caters for every need. Do you really need any of the above? I suggest that the most interesting paints (pigments) are the Transparent Orange and Gold Brown for reasons I've already stated.