This is my latest Indian portrait painted at the AVA session last Thursday. 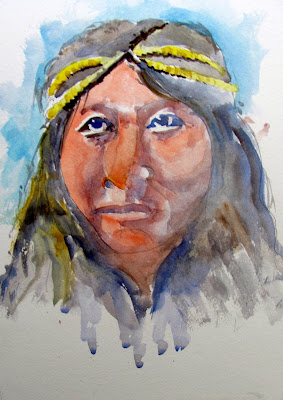 I downloaded the original photograph from Pinterest OR it may have come from the Facebook community `Moses on the Mesa', a treasure trove of old Indian photographs. I don't really do it justice as in the photo her beautifully groomed hair tumbles down to her waist. Frankly I didn't feel able to portray this in a way that does it justice. Artistic licence?

I made a pencil drawing, not over detailed then painted, starting with the eyes, nose and mouth then gradually the rest of her face. When dry I put stronger colour in for the shaded areas. Colours used were limited to Cadmium Red Light, Raw Sienna, Ultramarine Blue and/or Cerulean Blue. The hair is a mixture of Ultramarine Blue, Burnt Umber with some Raw Umber. With more thought I might well have used other colours as I did in the Amy Winehouse painting. The original guide photo, as usual with these Indian paintings, is in black and white tending towards sepia.

Brushes used were Isabey, Escoda and Rosemary travelling brushes from 6 to 10.

In general I think it reasonable. I masked out some areas around the eyes and left them the white of the paper. I've pondered whether that was correct - too much white - but as I'm uncertain decided to leave them as they are rather than touch them up with some pale reddish washes.
Posted by Peter Ward at 05:04 1 comment:

Another selection of watercolour paintings with a mix of artists, some old (and well-known) others new. Hope you like them. A variety of styles . 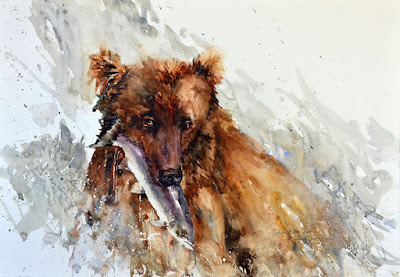 Bev Jozwiak. A slightly unusual study for her but I love it. 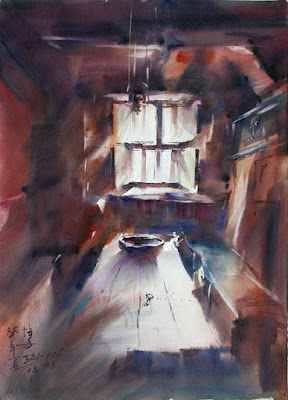 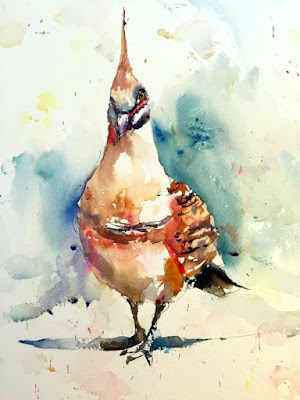 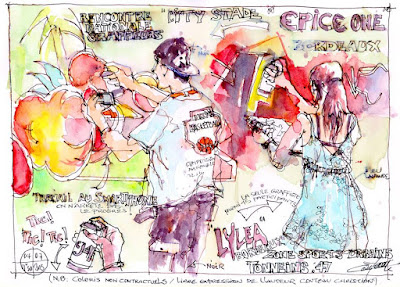 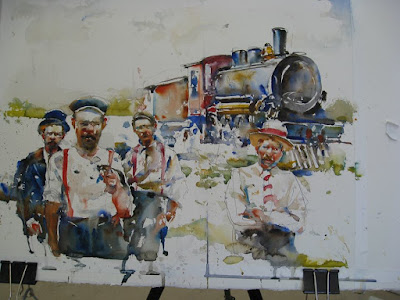 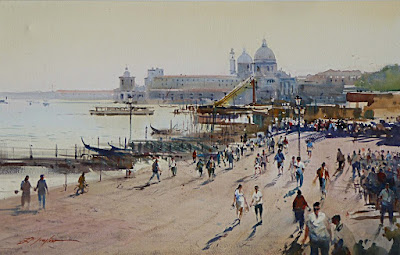 David Taylor - one of the leading Australians. 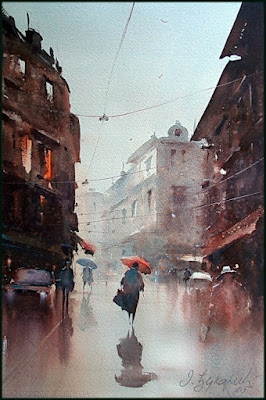 Dusan Djukaric - look at the placement of the figure! 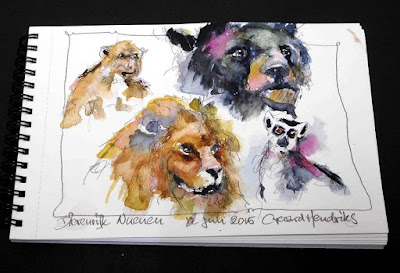 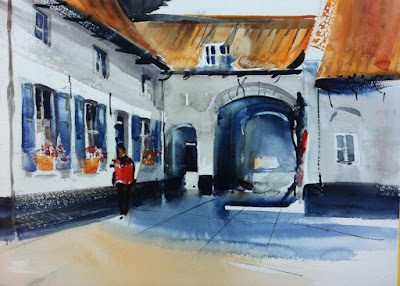 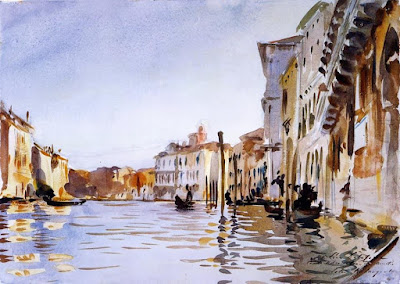 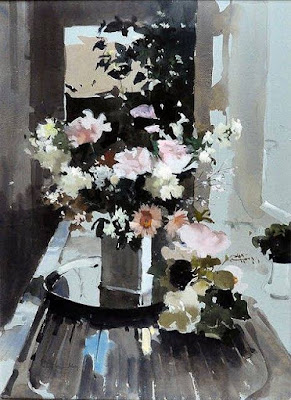 John Yardley - still going strong at approaching 80, although this is one of his older paintings. 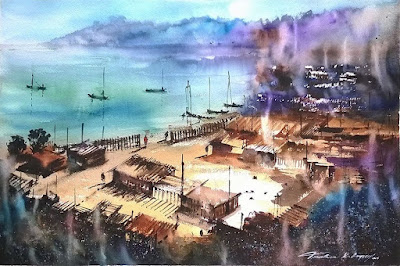 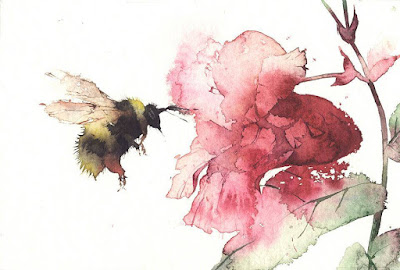 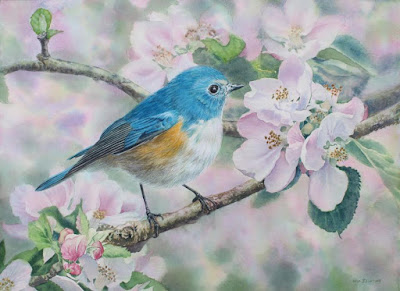 Some of these artists like Singer Sargent and John Yardley need no introduction, neither does Gerard Hendriks, Bev Jozwiak, Cao-Bei-an, Gerda Mertens nor David Taylor. The remainder I know less about but some `googling' would undoubtedly bring more information and they are all on Facebook in some form or other.

Despite my `anonymous' critic I continue to paint Amerindian portraits. Last week I was in Bath and called in  at `Good Buy Books' a shop that sells remainders - in other words new books at greatly reduced prices. I have bought many books at the shop but this was an unusual one. I spotted a book called `Edward S Curtis' by someone called  Hans Christian Adam. This was published by Taschen who, I am told by a keen photographer friend, specialize in high quality photographic books. It was £8.99p and although it did not show the original price I believe this was a fraction of it.

Edward Curtis created the largest known body of photographs of the North American Indian.devoting 30 years of his life to the subject. He has actually gained more fame in the years since his death. His most famous work is entitled `The North American Indian' which is a 20 volume series beautifully produced in a limited edition with an original price of $1000. I can't imagine what copies cost today.

When I bought the book it was encased in cellophane but when this was removed I wasn't disappointed. It has a superb collection of his photographs, a few of which I already knew but many I'd not seen before. No doubt more paintings will follow. 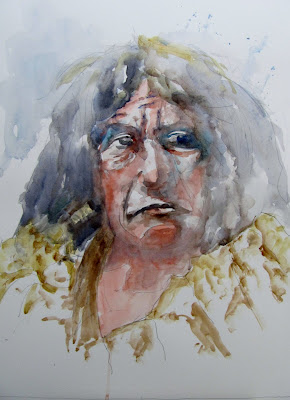 This is one of several paintings I've done on hot press, not all indians, and it certainly creates a different effect to other watercolour surfaces. Unfortunately not being an expert photographer it seems to me my paintings often lose something between photographing the original and transferring it here. Looking at the actual painting I think it better than the image above. Maybe this is just me making an excuse for my deficiencies as an artist. I keep trying.

The main problem in tackling this and other similar subjects is that the guide photos are sepia coloured and tend to be on the dark side with excessive contrast. Colours include a lot of guesswork on my part. I don't strive for a super realistic result but try to capture the subject with an impressionistic approach - the Charles Reid way. Sometimes it works sometimes it doesn't. I did this at the last AVA session and some of my fellow painters remarked I'd captured his likeness.

I used my small Craig Young Sketch box with Cadmium Red Light, Raw Sienna and either Ultramarine Blue or Cerulean, in various proportions, for the skin colours. Brushes were Isabey, Escoda and Rosemary travel brushes from size 4 to 10. The hair was a mixture of Ultramarine Blue and Burnt Umber with a little Raw Umber.

At the AVA session last Thursday I decided to continue with  animal paintings. I picked the subjects from photos I'd saved to the ipad and made the initial drawings the day before the AVA session. I used a 2B lead pencil which I sharpened before proceeding. The procedure again was to make a loose drawing, as accurate as I'm able, with not too much detail. I'm still affected by the accident to my right hand, that dislocated my little finger. My control has been affected and it's hard to be precise - even though I try not to be too fussy and don't want to get over detailed. 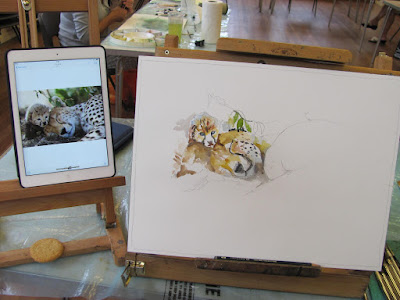 Stage One - Cheetah and cub. 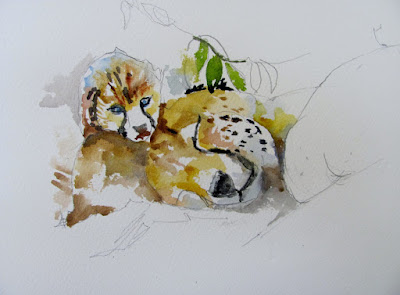 Painted the cub first, the head of mother then started on the greenery 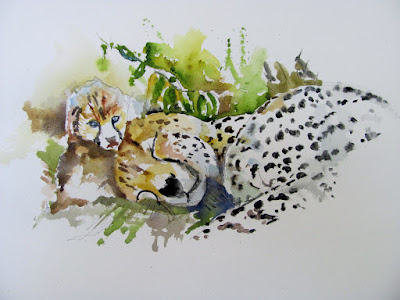 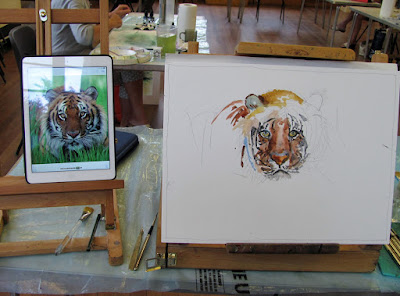 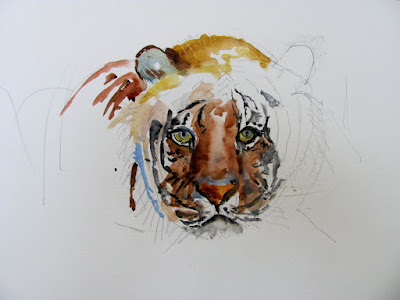 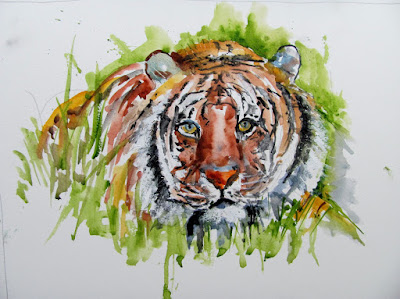 You may note that the paintings don't take up all the paper. I am loath to cover every inch with paint and the approach is more towards a vignette. I don't plan to frame them but if I did something like 12" x 8", with a wide mount would probably do.

I completed the paintings in two hours, the exception being the Tiger where I added some white acrylic paint three days later.

Colours used included Raw Umber, Raw Sienna, Translucent Brown (Schminke), Quinacridone Gold (DS PO49), Quinacridone Rust (Graham PO48), Cerulean Blue, Ivory Black, Sap Green (Graham), Apatite Green (DS) and possibly touches of one or two others. Ultramarine Blue with either Translucent Brown or Burnt Umber for the darks.Does it look as if I've gone mad and used too many colours? I don't think so myself - why not?

I like painting animals and birds, and last week at an AVA Summer session I decided to paint some Lemurs, from a guide photo downloaded from the Web. Lemurs are mainly quite small animals native to the large island of Madagascar, in fact they are found nowhere else. According to a recent BBC programme there are 106 species and all are in the endangered category. Because of their appearance, which might be called `cute', they are a favourite of many and the highly popular animated children's film `Madagascar' , which most grandparents have probably seen, featured them heavily, undoubtedly adding to their popularity. The problem in Madagascar, as in many other poor countries, is the low standard of living of the bulk of the population, and in order to improve this deforestation , which reduces the Lemurs habitat, is being practiced on a large scale, in order to increase farming area. This is a very difficult problem because, in general, indigenous people see animals as competing with them for scarce resources and getting them to conserve both the animals and the environment is difficult when survival is their main interest. It would be tragic if they were to disappear. 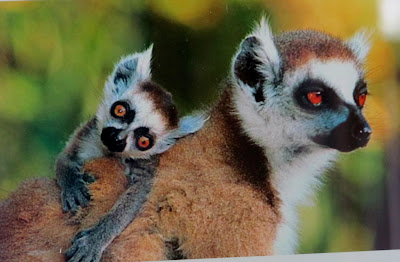 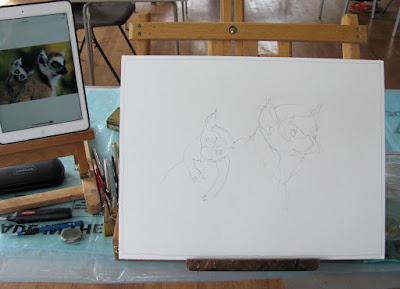 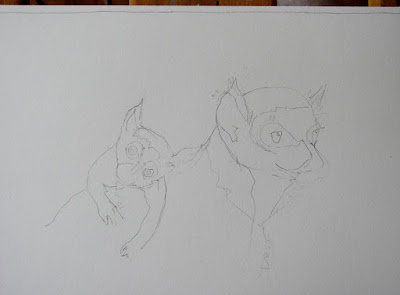 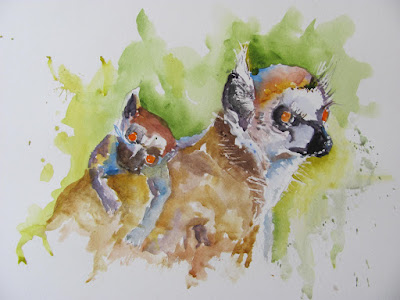 About two thirds of the way through 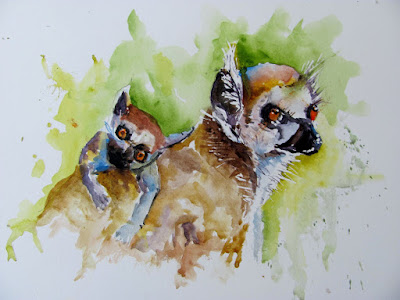 I think the eyes were the key so I took as much trouble as I'm capable of using the Isabey Kolinsky travel brush Size 6. As I've said before, although listed as a 6, this brush is much slimmer than a normal six.

Brushes were primarily the Isabey and an Escoda travel brush size 8.