The following are recent efforts. Mostly done at AVA sessions, although I've missed the last two due to family commitments. Struggling to concentrate a bit at the moment. 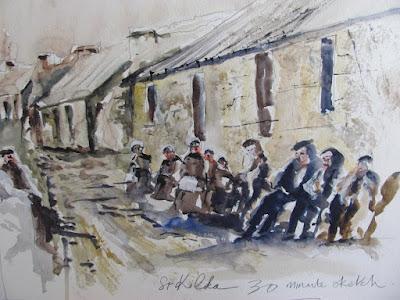 This was a 30minute sketch including drawing and painting. It was based on an old black and white photograph - very hazy and gloomy.  St Kilda is the remotest island off the Orkney isles from North West Scotland. It was inhabited for centuries and the last dwindling inhabitants were removed at their own request in 1930. Life was very harsh and sea birds formed an important part of their diet.  The subject  was buildings which I don't do these days - not a favourite of mine. Colours as you can see are basically puddle colours mainly mixed from Ultramarine Blue and Translucent Brown from Schmincke. This latter has been re-named Transparent Brown in the recent updating of the range. I don't like this paper much. 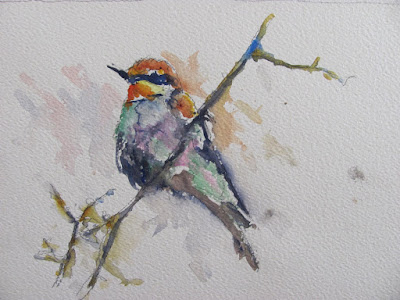 I'd drawn this one a while ago and as I finished early and quickly painted this. (I always seem to finish early and usually wash the cups up). 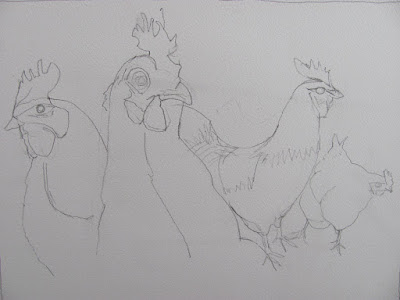 The next subject this Thursday is farm/domestic animals so I drew this composite from three photographs. I quite like it  and intend to view the painting of a cockerel on Gerard Hendriks DVD before I paint it.
Posted by Peter Ward at 05:02 4 comments:

Email ThisBlogThis!Share to TwitterShare to FacebookShare to Pinterest
Labels: Latest paintings - mine

I have now looked at the remainder of the new paints from Schmincke.  I stress I have not bought any as yet so this is purely my analysis of the pigments from a purely non technical viewpoint. My source is the The Art of Color database. 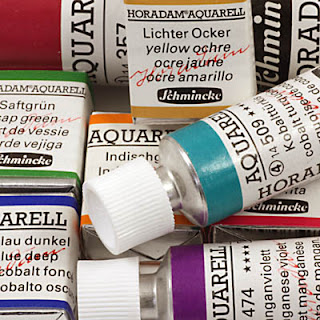 Quinacridone Purple. Pigment Violet 55 (PV55). Organic.."bluish violet to violet blue". Claimed to be superior to Quinacridone Violet PV19...."Hue closer to PV23 than PV19 or PV29".  PV55 was first introduced by Daniel Smith, and I bought a tube very soon after it was introduced. Not an essential colour and it lay for a while in my paint drawer without being used. When I came to squeeze some out found it had solidified. I know there are various ways of resuscitating such paint but to
my mind this is a negative.

Ultramarine Blue  PB29 "The colour of Ultramarine Blue can be varied all the way from a pale greenish blue through to violet". We know this from the chart of the various shades that Zvonimir von Tosic supplied. Schmincke already have an Ultramarine "Finest' with this pigment so presumably it is one of the other shades.

Phalo Sapphire Blue. PB15:6.  Epsilon Copper Phthalocyanine. "Intense deep blue in mass tone, reddish to greenish bright blue in shades....staining". Phalo blue comes in several versions including- it is said - a 'yellowish' one. PB15:6, amongst other PB15's, is listed by Lukas who call it simply Phalo Blue. PB15 appears in most makers ranges, often in more than one version. PB15:3, a greenish shade, seems most popular.

Viridian. PG18. Inorganic. "Dull or deep mid green to bluish green". This is common in other ranges and tends to be on the weak side. The artist Trevor Chamberlain said he had tried many and eventually found one by Talens (Rembrandt) that he liked.

Transparent Ochre . PY42, Yellow Iron Oxide. This is a very common synthetic pigment, an earth colour substitute "Dull reddish yellow to yellowish brown orange...Colour, transparency can vary widely depending on manufacturer variables .... PY42 and PY43 exist in almost any shade of yellow, orange, red and violet brown to green brown". The choice is yours!

Transparent Sienna. PR101. "Synthetic iron oxide red, inorganic.....various brownish yellow to orange to red shades with violet undertones....transparency depends on particle size and other factors, grinding, additives, binder etc". You will find PR101 in most ranges but  there can be considerable variation between different makers versions.

Transparent Green Gold. PY154/PBr7. Green Gold is usually made with PY129. This is a convenience paint made with PY154 Benzimidazolone Yellow and PBr7. PY154 is described as `'bright, light greenish through to yellow...claimed by some as good primary yellow". PBr7 is brown iron oxide "yellowish brown to brown to dull red....transparency varies widely depending on mineral content and other impurities....exists in almost any shade of yellow" , This Schmincke is an  unknown quantity until tried.

Hematite Black. PG17. Here we have a mystery. According to my information PG17 is Chrome Oxide Green. ...dull yellowish green to mid green". How therefore can it be called Hematite Black? I checked on the pigment number and indeed PG17 was confirmed. Convinced this couldn't be correct I contacted Schmincke and received a very prompt reply from a lady called Claudia Moller.. " 14 789 hematite black contains the pigment"hematite", a black chromium oxide pigment which is named PG17." Make of this what you will. Perhaps Zvonimir will comment.

Cobalt Violet Hue. ?. I have so far no details of the pigments involved in this ;paint.As it is described as a 'hue' I assume more than one pigment is involved.

Overall I'm not sure what all this proves as we now know that variation in pigments of the same number is considerable and the way the manufacturers formulate the paints also has a large influence on the final result. Nevertheless I hope this will enable some of us to determine whether or not we wish to explore these paints further and indeed try some that seem interesting. I think the Schmincke range is very good and with these additions even more competitive.

A word or two about PBr7. This designation or whatever you call it covers a wide range of earth pigments, in other words coloured rocks that  were and are mined, crushed and turned eventually into paints. According to Handprint - now seriously out of date (sadly) - manufacturers have been replacing true earth colours with the synthetics PR101. PY42 and PY43. What many are not doing was changing the information and still saying  "PBr7". Trading standards? It also seems more and more might be changing pigments and /or adding them without letting us - the buyers of these paints - know what is going on.  I don't know the extent of it but it is definitely happening in certain instances.  We have been told that the earth colours are running out and they had to seek alternatives ie synthetics. I don't believe this for one minute. Just in my own experience there is a mine in the Forest of Dean  that still mines earth pigments and when I was in Provence, France not that long ago you could buy tons of the stuff with shops selling nothing else. We also have Daniel Smith with the Primateks. I'm told pigments are now being mainly sourced from China and the Alibaba conglomerate will supply an much as you want in metric tons. Who is kidding who?

If you want more information see https://janeblundellart.blogspot.com/  and put Schmincke in the search box. Fantastic.

Added: 14/04/2017. There are changes to the Schmincke range that go beyond introducing these new colours.  Two of my favourites , Translucent Orange and Translucent Brown have been renamed as "Transparent Orange and Brown. I suggest if interested you consult Jane Blundells blog and also the Schminke.de site where there is a complete online brochure in great detail. In fact if you like Schmincke this is a must. There are other changes.

A comprehensive INDEX for the blog is in June 2014. Type June 2014 in the top left hand search box and this takes you to it.

Here are Aprils batch of watercolour paintings. Another selection showing the huge variety possible with this underrated , at least in the UK,  medium. My aim is to show the vast range of paintings possible with watercolour. Obviously, like everyone else, I have my particular favourites and also tend towards paintings that are loose with the mantra 'less is more'. However that doesn't mean I don't admire and marvel at paintings done in styles and techniques different to those I aspire to. Many of these artists are unknown to me but you can look up most of them on Facebook, which is where the paintings originally appeared. 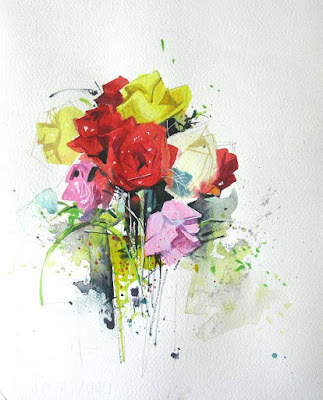 
Milind doesn't usually do flowers but the colours tend to mirror those in his other paintings. 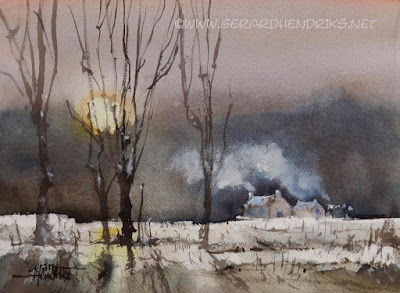 
A slightly unusual subject for Gerard but I notice some of his recent paintings are moving into different subjects. 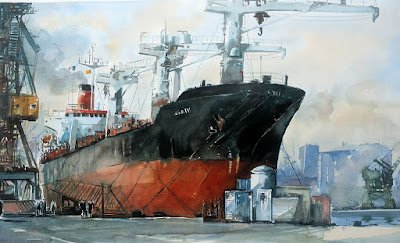 
This reminds me of the Trevor Chamberlain painting of a large tanker. I think this not quite up to that standard but not a million miles away. 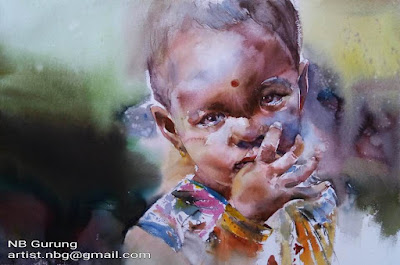 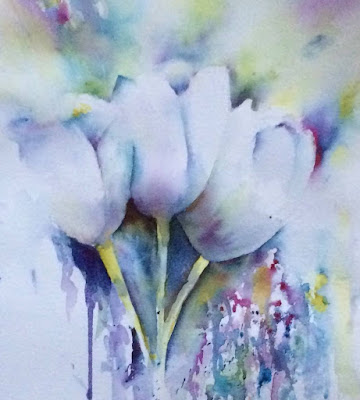 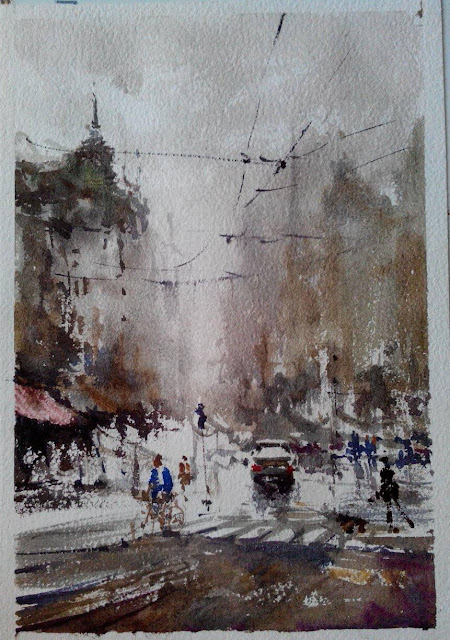 
An example of a very loose but effective painting. 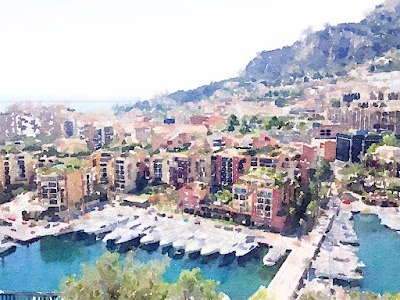 
Amazing painting this with stunning detail. I don't know the size but obviously quite large. 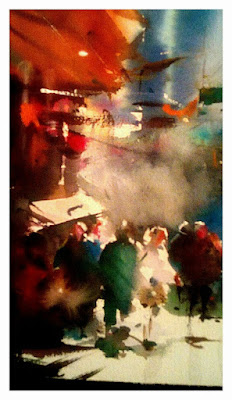 This is a sketch - wonderful! 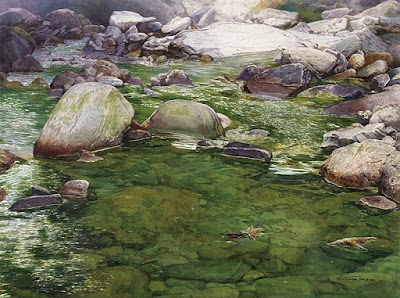 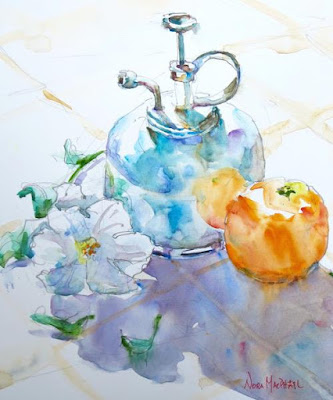 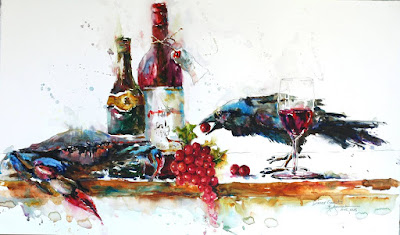 The wonderful Bev Jozwiak, I like her jackdaw paintings as well as many others. 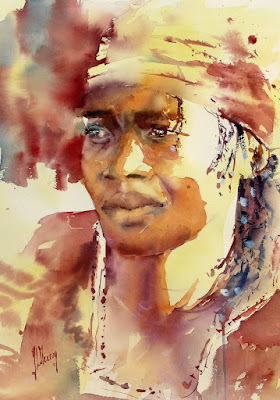 
The only details here are the eyes, nose and lips but look how they set off the rest of the painting. Great colour choices too. 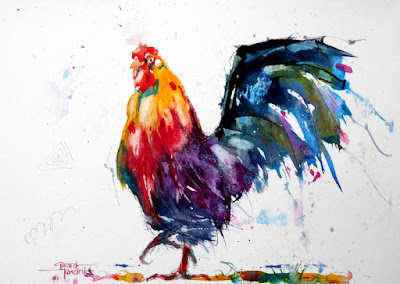 
This may well be the cockerel painted on his DVD. Contrast this with the previous painting by him I've shown.. 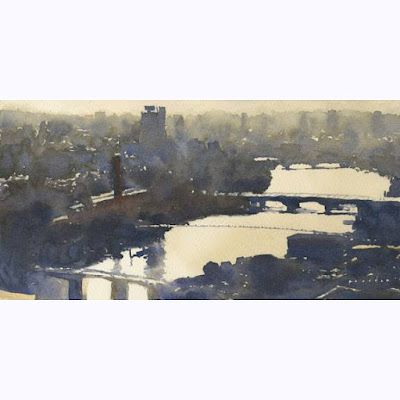 
Obviously another large one (?) but very atmospheric. Look how the river contrasts with the many greys of the rest. 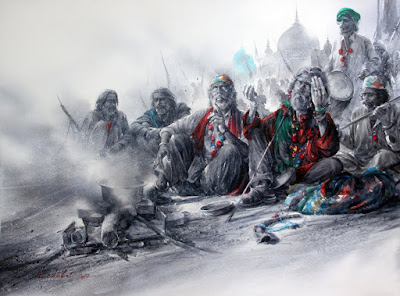 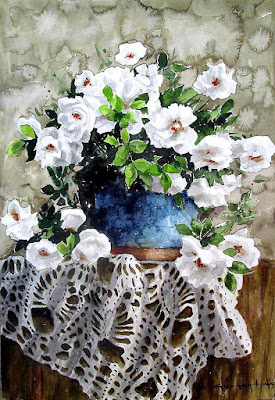 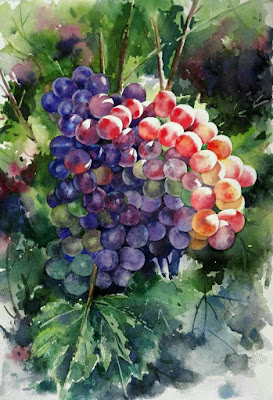 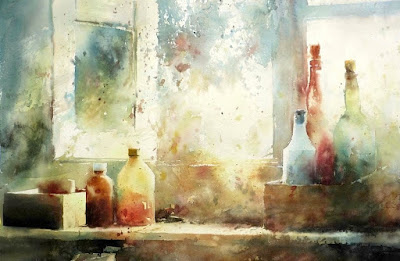 I love this but seem to have mislaid the artists name - nevertheless I decided to include it. I love the approach. 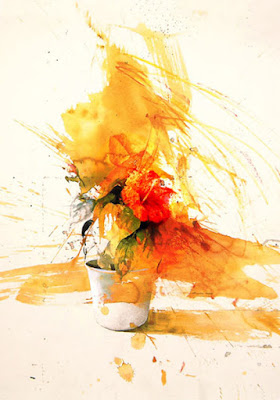 
I only recently became aware of this artist and love his work.