For the first time this year I was able to paint outside this last weekend. The location is about 100 yards from my home, which although in a modern estate is on the edge of farmland. I have painted this scene many times with varying results. 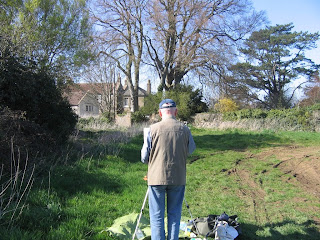 The first attempt was last Saturday and after unloading all my kit I realised I had forgotten the walkstool! This obliged me to paint standing up which I'm not comfortable with. I know many top artists like Trevor Chamberlain say you should stand up to paint but each to his own. I don't have the steadiest of hands and sitting down enables me to overcome this handicap by resting my little finger on the paper a la Charles Reid. The first painting was unsatisfactory once I had a good look at it and it was soon discarded. This prompted me to try again, and with excellent weather conditions I returned  on Sunday to the same spot. The resulting painting, which I was more careful with follows. 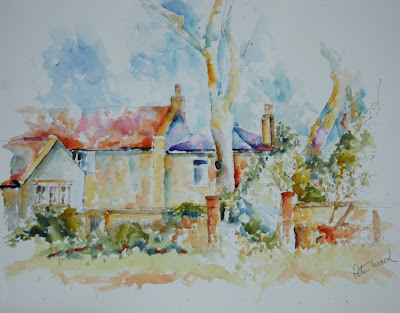 Keynsham Manor has a long history going back some hundreds of years. There are a pair of really enormous beech trees at the entrance, which I relegated to a minor role and simplified. They tower way above. Owls usually nest in one of them. Overall it is a very complicated subject with masses of `stuff'  and in the past I've often tried to put too much in. The Manor is now split into three separate residences and I know the couple who own it and live in one section. John has told me something of the history. 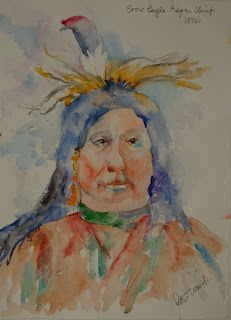 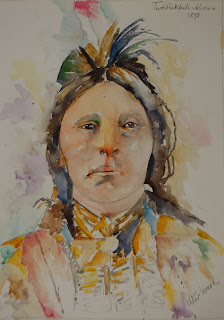 Two Hatchets.115lb Schut Vivace 15" x 11" Not.
I much prefer the `Two Hatchets' painting to that of `Crow Eagle'. They were painted because I wasn't happy with the originals and several others have finished up in the recycle bin in the interim. Paradoxically the resemblance to the original photograph is less but I prefer the result above to my original effort.
With both I studied the two paintings of Joseph Wolfskill in Charles Reid's `Watercolor Solutions' book and tried to emulate the combination of   hard and soft edges while putting in `small areas of detail'. Charles's approach is quite abstract, apart from those small areas of detail, so I'm not trying to do a `chinese' copy. From what I've seen on the three painting courses I've attended other more accomplished painters than me find this difficult.
The other major hurdle is that the photographs are in black and white, taken in the 1800's, and tend to be just that black or white. There is not much variation between the extremes and this, together with  not knowing what colour the clothing was, means a fair bit of guesswork is involved. I've also tried to alternate warm and cool.
Colours, various mixes of Cadmium Red Light, Cadmium Yellow Light, Raw Sienna, Cerulean and Cobalt Blue for the skin tones. I tried Permanent Alazarin Crimson in an earlier painting instead of Cadmium Red but didn't like the result. The reason I did that was because generally speaking, although not universally so, Indian complexions were and are swarthy.Colours in the clothing, and some in the hair,  included Viridian, Golden Lake (supposedly Quinacridone Gold PO49?), Ultramarine Violet and Raw Umber. Ultramarine Blue mixed with Burnt Umber or Burnt Sienna was also used for the hair and darks generally. My paints are mainly a mix of Maimeri, Windsor and Newton and Daler Rowney. I do have a few colours from other makes. Why the mix? I'm an impulse buyer and buy when paints are on offer but the high cost of Artist's paints is also a factor so any cost savings are welcome.
Summing up I think it is worthwhile as an exercise, especially as I'm interested in American Indian history, and starting from my original efforts improvement is taking place although I realise I still have a way to go. Any comments?
Posted by Peter Ward at 04:18 2 comments:

This colour, described by the Australian watercolour artist Robert Wade, in his 2002 book `Robert Wade's Watercolor Workshop Handbook', as the `best thing for years',  has had a rapid rise and - apparently - fall. Described by Handprint as a`mixed crystal form of PV19 Alpha and Beta' - I've no idea what that means - pigment production ceased in 2001 due to lack of demand from the automotive industry. This is again from Handprint who also say most paints with this pigment were discontinued in 2005. Initially there appeared to be four, two from Daniel Smith, the others from Winsor & Newton and Maimeri.

Winsor and Newton reformulated `Quinacridone Gold' as a mixture now containing PR206, PV19 and PY150. All excellent pigments but don't expect the same results when mixing with others.

Maimeri continue to offer their version, called `Golden Lake', although the tube states it contains `quinacridone PV49.' I can find no trace of a `PV49' so assume it is a misprint that Maimeri have failed to correct - it has been like this since introduction. I contacted Bruce McEvoy about his comment that the paint was discontinued in 2005, which is what  Maimeri told him he says, and his reply was `the tube  may say that but....' .
An initial enquiry to Maimeri was promptly answered saying `Golden Lake' was still available and indeed they had supplied some to Jacksons, one of the largest UK art suppliers, in January. Following Bruce's comments I contacted Maimeri again and asked what was in the paint and why PV49? My e-mail was acknowledged but nothing further has been heard since. Hmmmmm!

Is that the end of it? On checking through lists of paints from several leading makers I came across this from Sennelier, the French manufacturer. According to their current pigment information PO49 is listed in five paints, all mixtures. Quinacridone Gold (with PG7), Mars Yellow (with PBr7), French Ochre (with PG23,PY3), Yellow Lake (with PY153), and Chinese Orange (with PR209)! No shortage of PO49 there it seems but no pure pigment paint either. I believe, until recently at least, Daniel Smith was still offering Quinacridone Gold in it's huge range. However since writing this I note that the new Great Art catalogue http://www.greatart.co.uk/ has a watercolour chart for Sennelier with one difference. Quinacridone Gold, as a name, has vanished and under the same number 445 is something called `Brown Pink'.Note: 20/10/12. Sennelier reformulated their range in 2012.

I only have experience with the W & N and Maimeri versions. Winsor & Newton Quinacridone Gold  was lighter and handled better than `Golden Lake', which I have not been impressed with. I like Maimeri paints, which are excellent value, but this colour is darker and grittier than the original Winsor & Newton paint. What actually is in the tube? The silence from Maimeri makes me wonder.Note:20/10/12. Information from Maimeri to Handprint said they had replaced PO49 with PY43 `a similar pigment'.

As a footnote the closely allied Quinacridone Orange PO48 is also heading for the exit due to `lack of demand from the automotive industry'. This is another lovely pigment and the Graham version, Quinacridone Rust, is a gorgeous colour.  The new Da Vinci (USA) range also includes paints listing this pigment. Both Graham and Da Vinci are only available from T.E Lawrence of Hove in the UK http://www.lawrence.co.uk/, while Maimeri from Jacksons  http://www.jacksonsart.co.uk/ and Turnham http://www.artistmaterial.co.uk/ , possibly a few others. Jacksons also sell Sennelier.
Posted by Peter Ward at 07:18 8 comments: