Following up the previous brush posts, one on synthetics the other sables, comes the third instalment -  Mops. Although I have a number they are not my brush of choice. I've used them only sparingly so once again I have enlisted my good friend John Softly to do the honours.

If you know your history you will be aware that Edward Wesson was the first artist to use - and popularise - a French Polishers mop for watercolour. I have no information as to when it was that Ted first started using the French Polishers mop but he purchased them initially from France. In an article in the May 1980 edition of Leisure Painter he wrote "Personally I have always used squirrel haired "polishers mops", and in the smaller sizes, a selection of Daylons (nylon) and oxhair". We can therefore  assume that he was using them prior to his stint in the army in WW2. According to Herrings of Dorchester, artists themselves, they first began getting requests for these brushes from Wesson some time after the Wars end and, after great difficulty,  found them in France. Later they got to know him personally as he held many workshops in Dorset, not far from the Herrings shop in Dorchester PW. 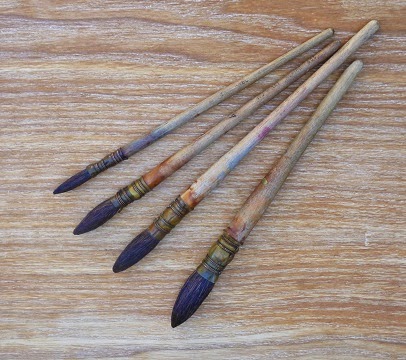 Today there is more written, and questions asked on forums, about mops than any other brush type. Traditionally made of squirrel hair with a quill ferule, bound with wire, but nowadays more are metal ferruled and synthetic versions are coming onto the market as popularity grows.

Not only are there mops in rounds but we have the Petit Gris, cats tongue, or filberts which, thanks to artists like Gerald Green and John Hoar, are increasing in popularity. Flat squirrel hair, one stroke brushes, are also available but it is debatable whether these come under the `mop' banner.

Possibly the major drawback with mops is sizing as there is no standard between manufacturers (this also applies to rounds in both synthetic and sable. PW. John says in response to this as follows: "Your comment is certainly correct but in round sables and synthetics, a Number 10 say can differ in size by a few mm in hair length and diameter but usually smaller to make it an 9 or 8. With mops sizing means little. Alvaro's go from 00 to 10. Harmony from 1 to 10, Jacksons from 6 to 22, Isabey from 3/0 to 10, W & N from 000 to 12 and Da Vinci from 0 to 6. Unless you know exactly what you are getting it's best to ask the retailer actual size or buy from Jacksons - they list ferrule sizes in their catalogue!"). The rounds are the problem as Petit Gris and flats are usually sized in fractions so when you order - for example - a three quarter inch brush you know exactly what you will get. If you order a No 8 round mop you will have no idea what the size will actually be. Some online retailers list hair lengths and diameters, where the ferrule meets the hair, which takes the gamble out of purchases. 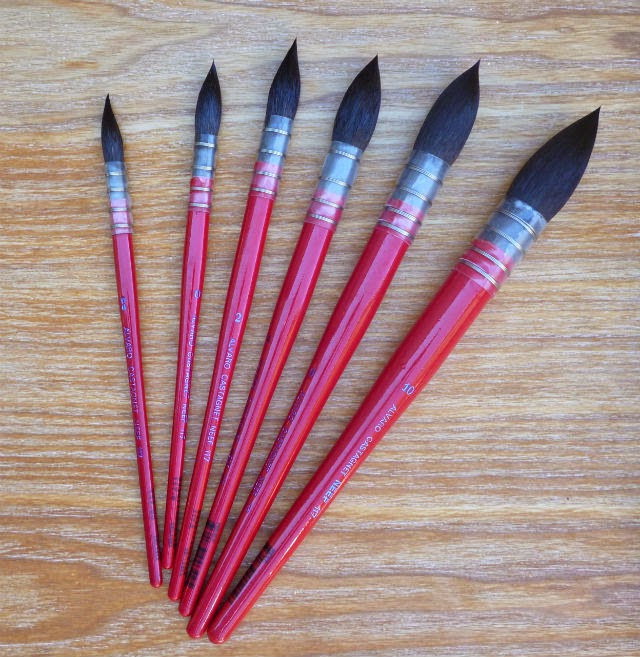 Prices vary across the range  with the Isabey - made of Kazan squirrel hair supposedly the best - and the Neef Alvaro Castagnet series at the upper price level with others somewhat cheaper. As usual one gets what one pays for and the hair on some of the cheaper brushes would appear to have started life on the tail of a feline (see what is said on this issue of `authentic' hair in the article on sables. Why should mops be any different? PW). One of the better budget sets is the Harmony brand from  Jerrys Artarama, a large American online retailer. You don't expect Kazan squirrel hair from Siberia at this price but I found them to be good, a no frills mop, albeit the hair a little coarser than most. 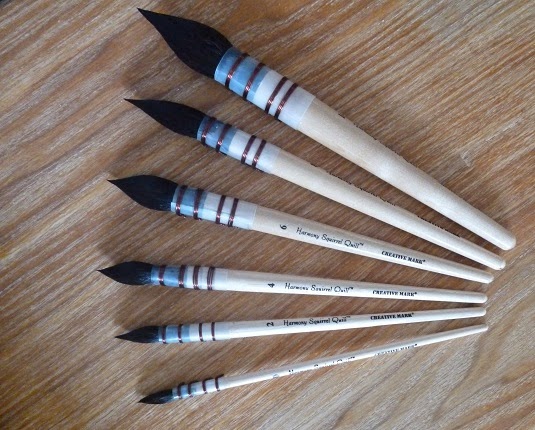 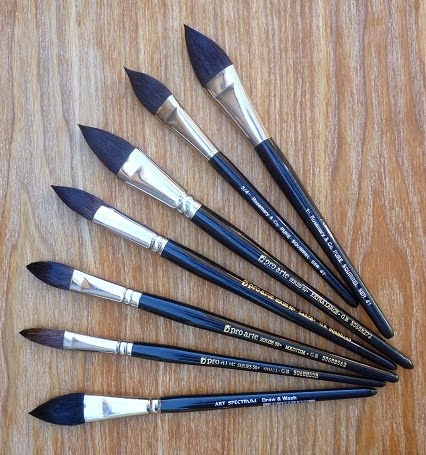 It is purely conjecture on my part but I believe the Isabey genuine mops as used by Wesson were, and are, considered the Rolls Royce of mops. While I am not swayed by artists endorsements, Escoda have most high profile artists tied up anyway, I have bought mops with an artists name on the handle. The full set of Neef brushes marketed under Alvaro Castagnets name, and the single, metal ferruled, Escoda mop that Steve Hall sells. The Neefs have a longer handle and hair than most and I purchased them because other Neefs in my collection have performed faultlessly for 20 years.

Neef also do a synthetic mop which has had good reviews but I went with the Neptune brand. They only offer 3 quill mops, 4, 6 and 8, but their synthetic hair is very close to squirrel and by far the most popular synthetic quill mop brush on the market. I've not come across either the Harmony or Neptune brands on sale in the UK. PW

I bought the Steve Hall brush on impulse when buying his book, and whilst I find it a nice, long-haired, brush, softer than most, it is inclined to be uncontrollable when fully loaded. Rosemary & Co make some generic brushes for the British online retailer Jacksons, but I am unaware if mops are amongst them. Jacksons mops however are an excellent product and like all Jacksons own label brushes, built to a quality. rather than price, which is why I suspect Rosemary & Co are involved. 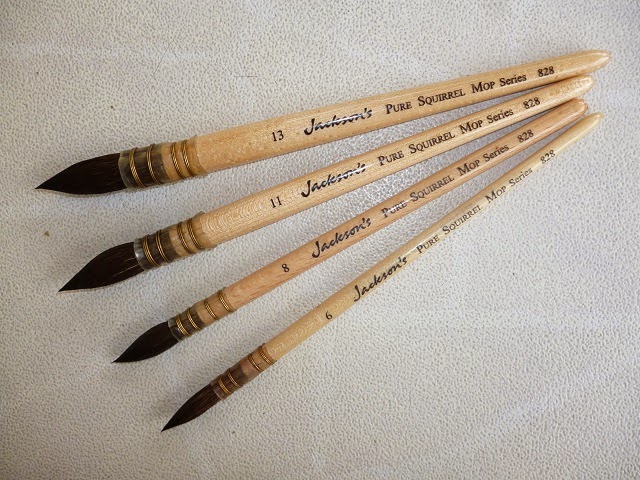 Rosemary makes  a series 1 Kolinsky quill brush and Jacksons a  series 777 synthetic quill, see the article on synthetic brushes. Although Rosemary calls her Kolinsky quill a mop there is nothing mopish about her high end series 1. They may bear a resemblance to a mop but are round Kolinsky sables and priced and perform accordingly (here I disagree slightly from what John writes based on my own experience with one of these mops, although mine was bought under the old ABS label. PW).

Traditionally polishers mops have quill ferules tied on with wire, the quill coming from the feathers of ducks, geese or swans, depending on the size of the brush. These days manufacturers use firm plastic sheeting in lieu of natural feather quills, but even if plastic it's still called a quill.

There was a time when all round brushes had quill ferrules rather than metal. Sizes took the name from the bird which the feather came from - the smallest a lark, which was the equivalent to a number 2 or 3 modern brush through thrush, crow, duck, goose ans swan - the Americans even had eagle in the mix! The hair was glued into the small end of the quill and the handle, referred to as the "stick", in the larger end but no glue - just a friction fit.

Due to the amount of water mops hold it is important they are dried with the hair pointing down in order that moisture doesn't creep into the ferrule, expanding the wood thus causing hair to be shed. Perhaps I would have more hair than I have today had I been suspended upside down after every shower.

Almost every high profile artist has at least one mop in their arsenal and I'm sure Ted Wesson would be surprised to see just how his mop, which was considered something of an oddity in the 1950s and 60s, has become a standard watercolour brush.

I am aware I have too many mops but, there again, like Peter, when It comes to art materials I have too much of everything, but if I hadn't got them I couldn't review them. 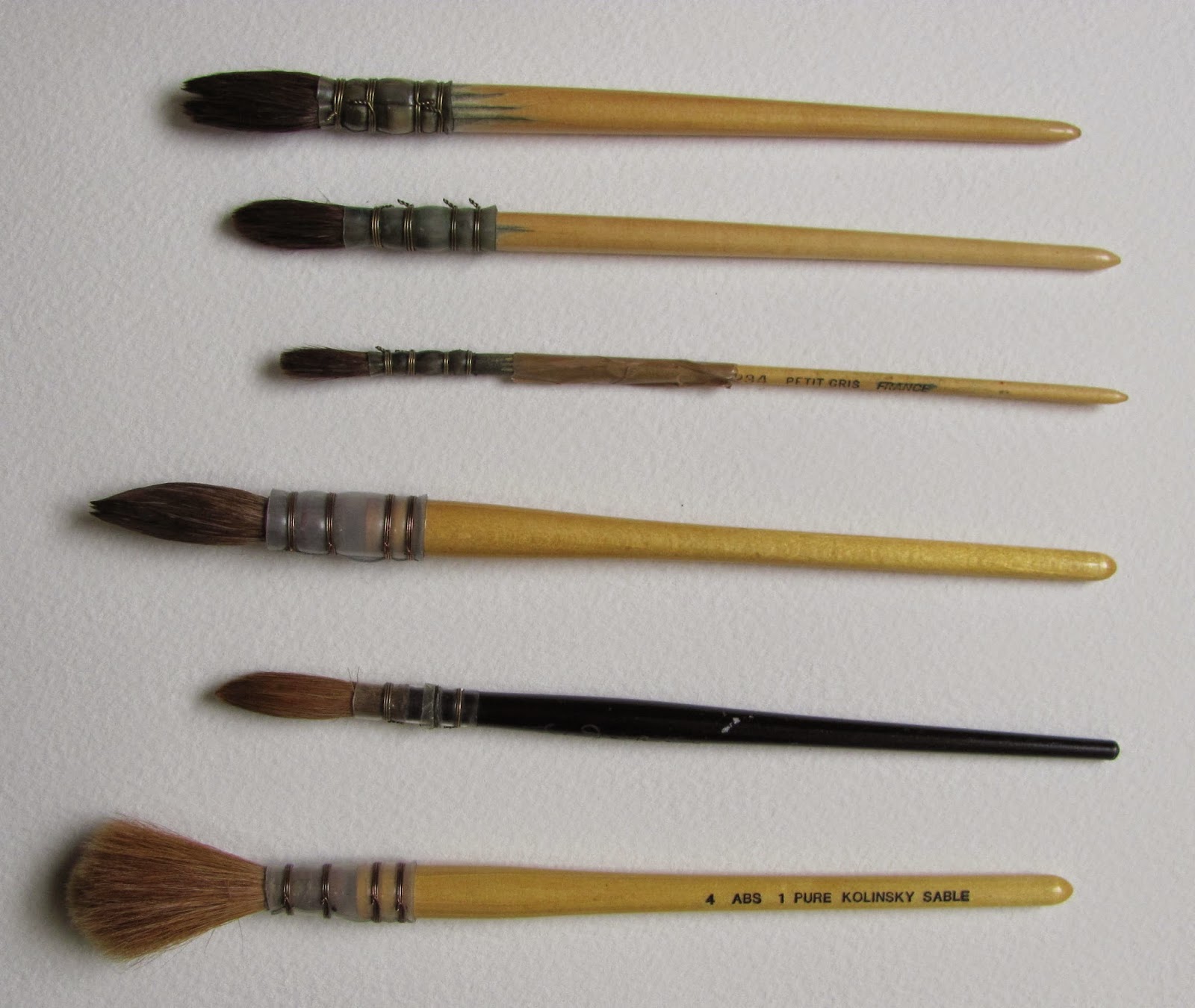 The top three brushes are Isabey, the large 4th one is a Rosemary squirrel (ABS), the 5th the Da Vinci Artissimo 44 size 2, while the last one is the Kolinsky sable mop series 1 ABS (Now Rosemary) size 4. The Da Vinci 44 size 2 approximates to a size 14 round, although a different shape so you can judge roughly what the other brushes equate to.. Look at the splayed out Kolinsky series 1! Even when loaded with water it doesn't point terribly well and is only useful as a wash brush (in my experience) PW.

My experience with mops is very limited. Currently the only one I use is the Da Vinci Artissimo 44 size 2. Initially I liked this brush very much but have gone off it a little, mainly because the hair became detached from the ferrule, although it was easy to put back in. I am afraid I am not a fan of the Rosemary series 1. Actually it was purchased under the old ABS label but I believe the brushes are the same.

That's it then folks. Thanks John for taking the trouble to produce this and give us the benefit of your experience.
Posted by Peter Ward at 02:52 10 comments:

This was the penultimate session before the official programme ends. I won't be able to attend next week  so this was my final one. During the summer the hall remains available and members do their own thing. If conditions are suitable several of us may paint en plein air, as the hall is in the centre of the old Saltford village and very close to the river, so subjects are plentiful. Actually attendances last year were slightly higher than during the official programme! Unfortunately I can't recall all of the artists names. I apologize for this as I know it is remiss of me but it is difficult at the end of the session to note all of them and then tie them to a particular painting. I do my best! 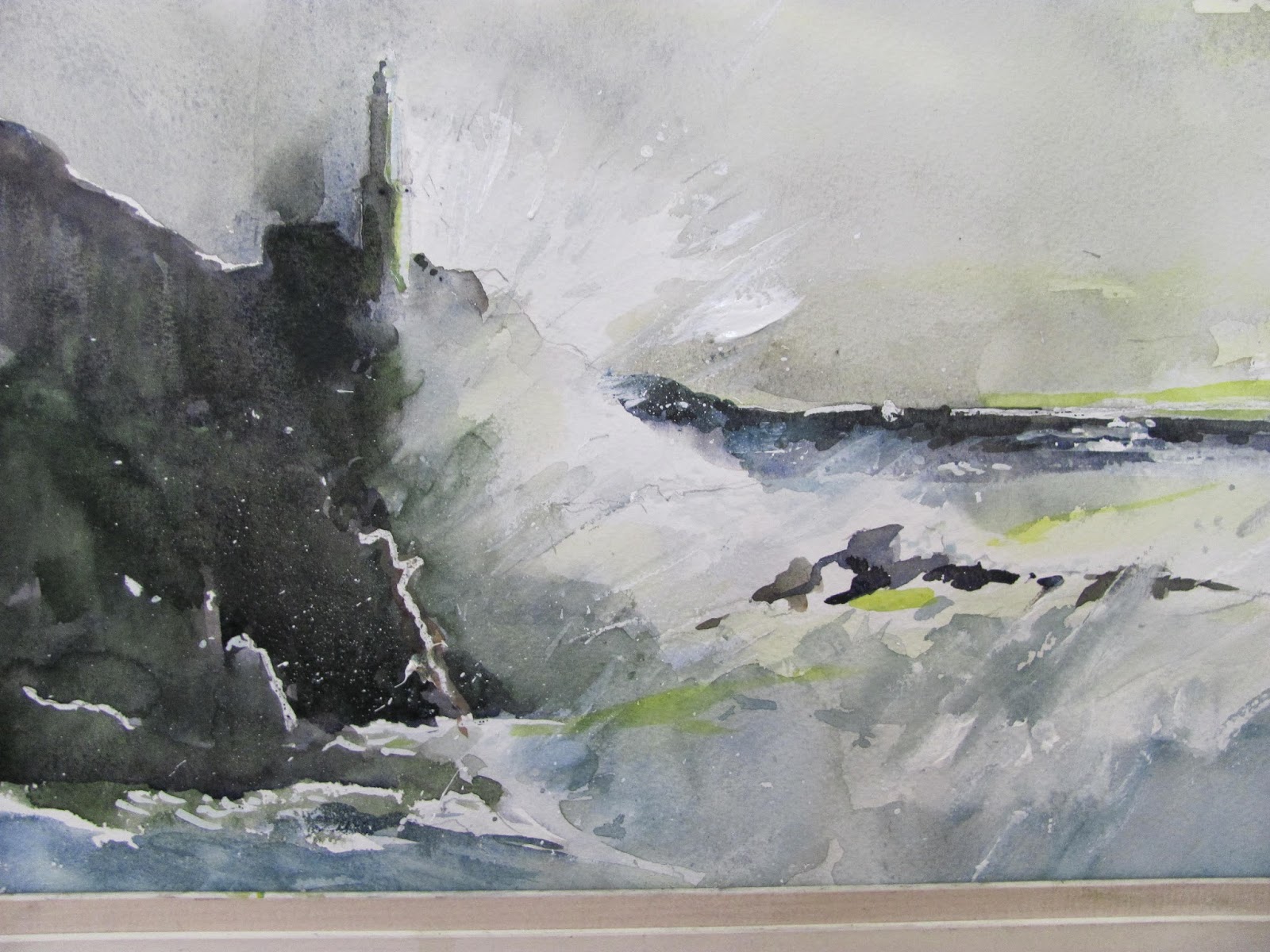 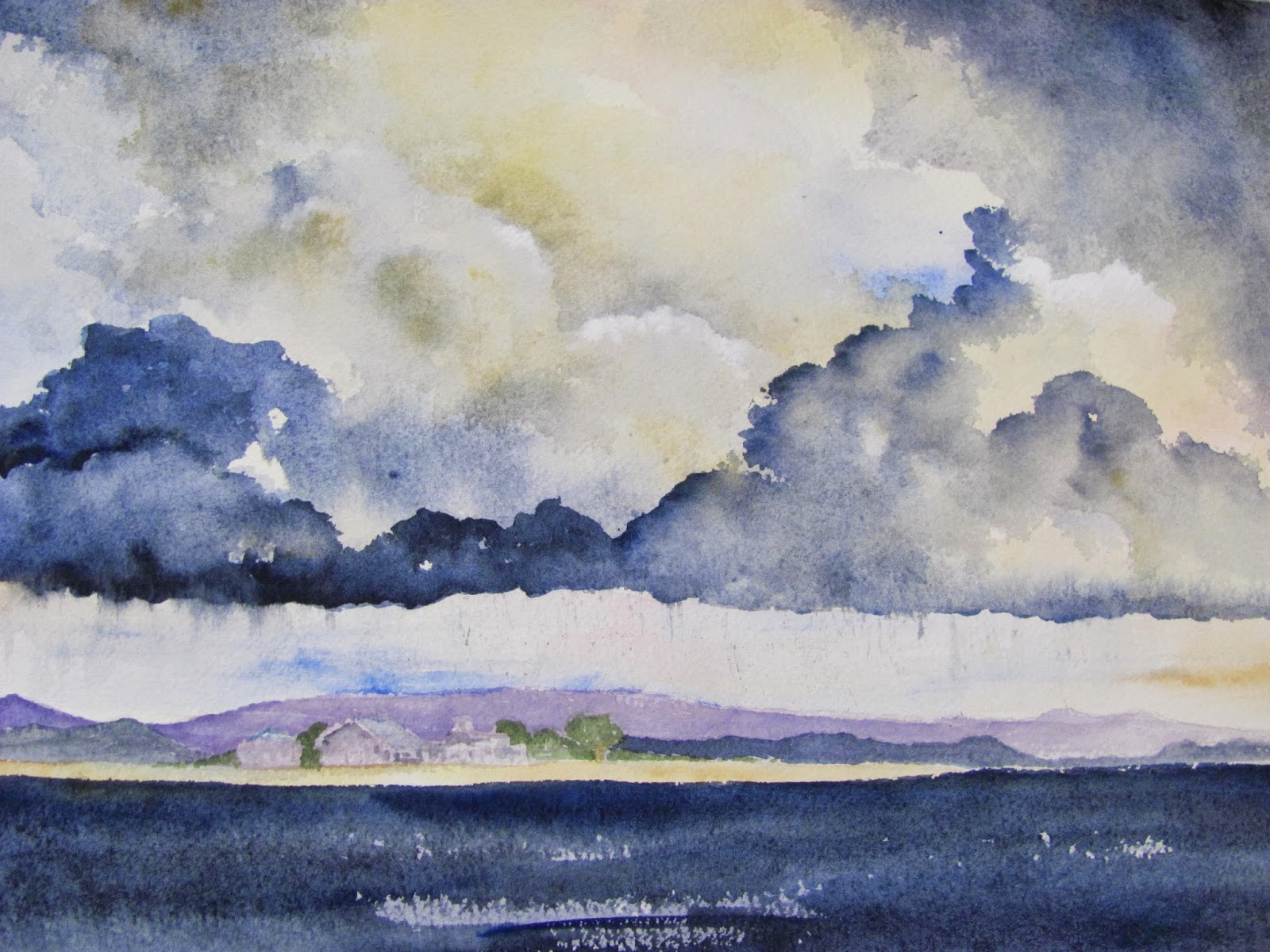 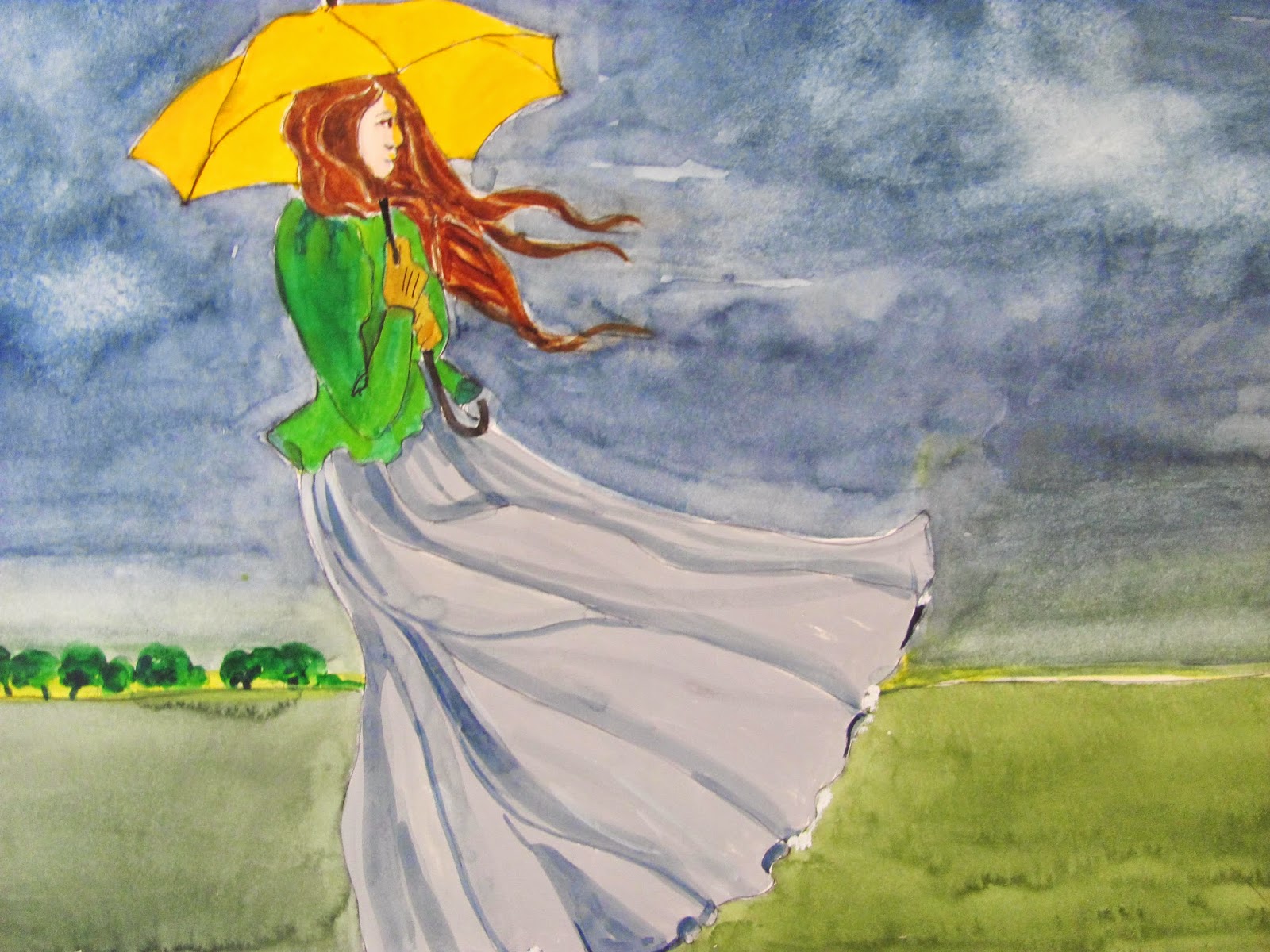 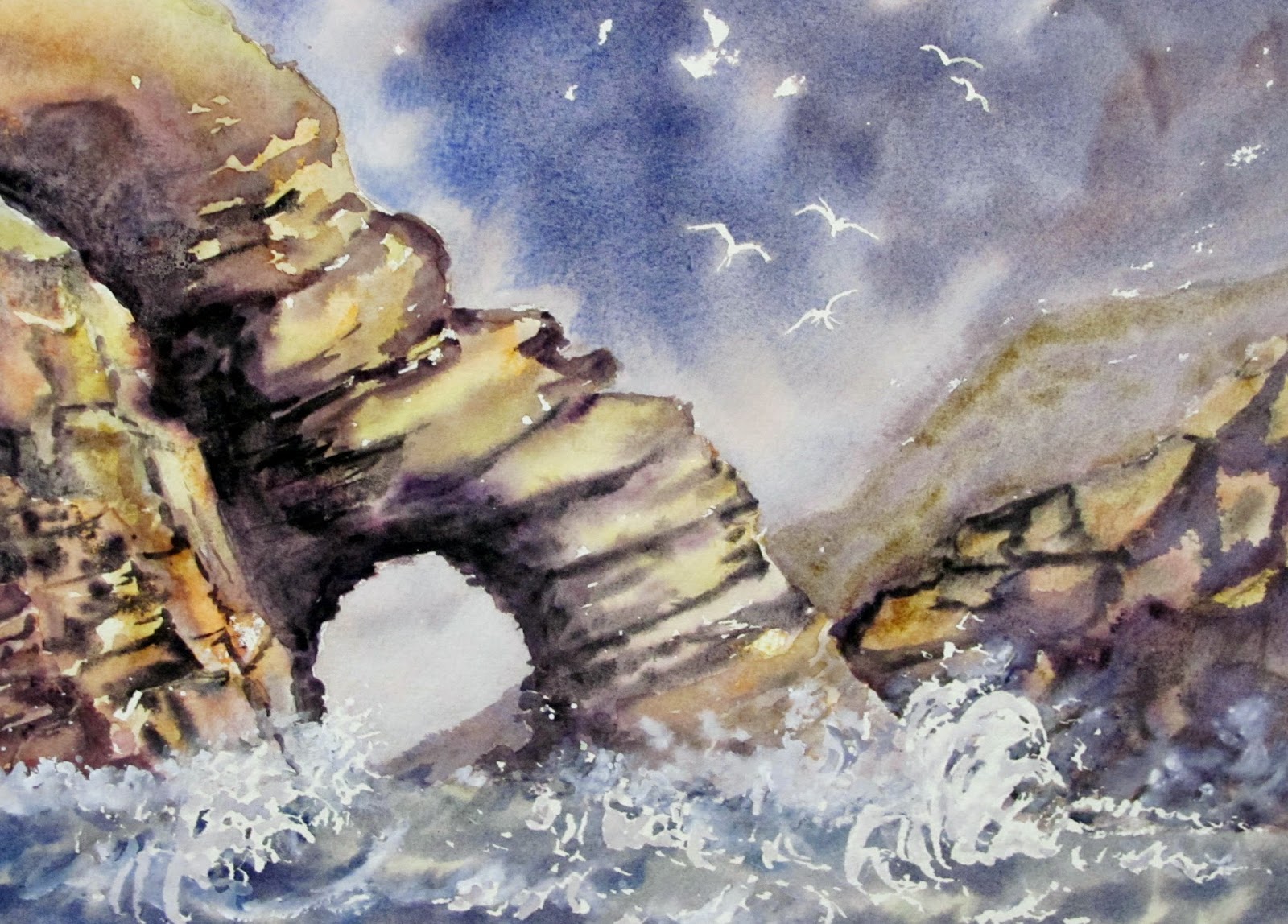 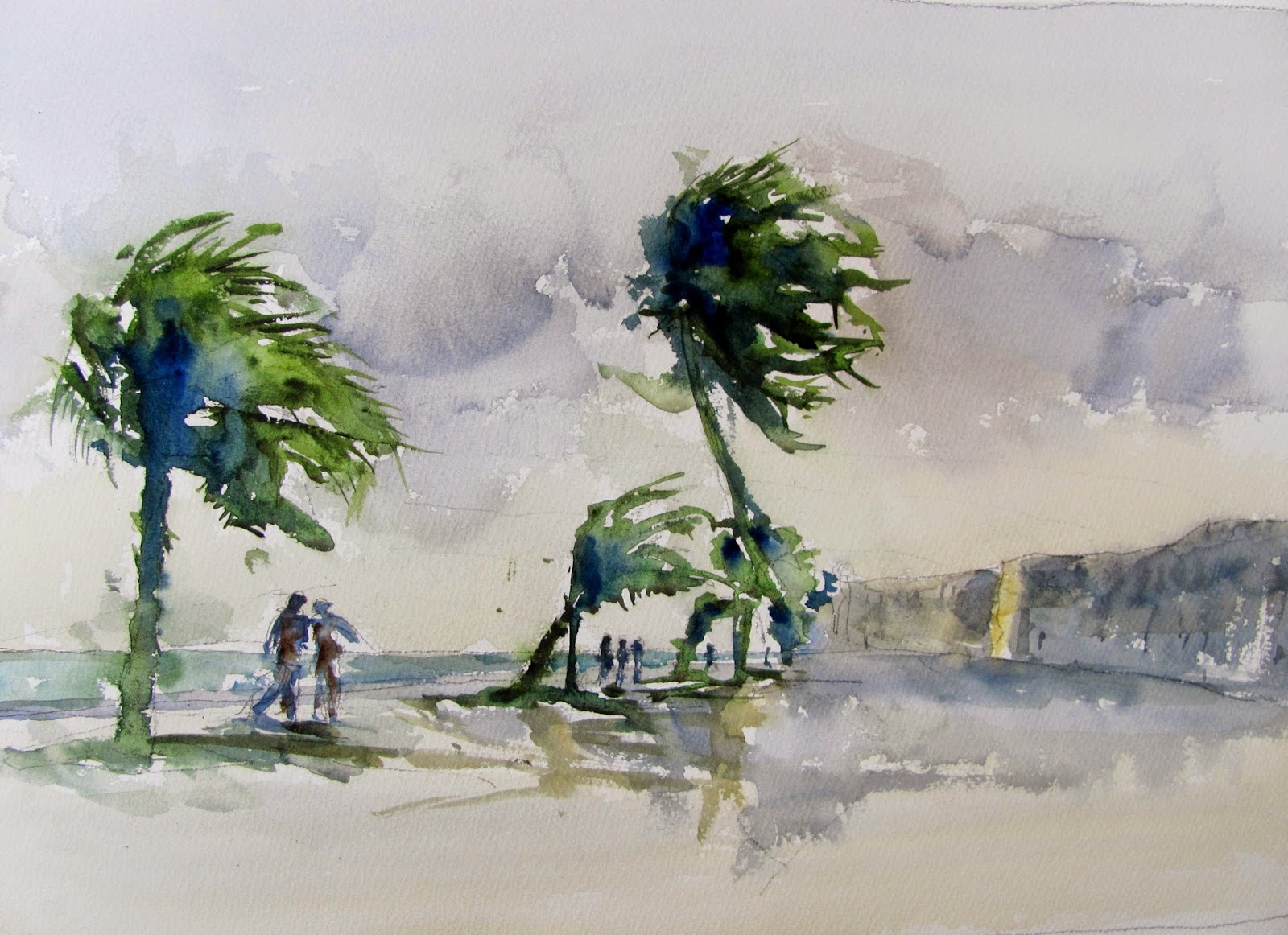 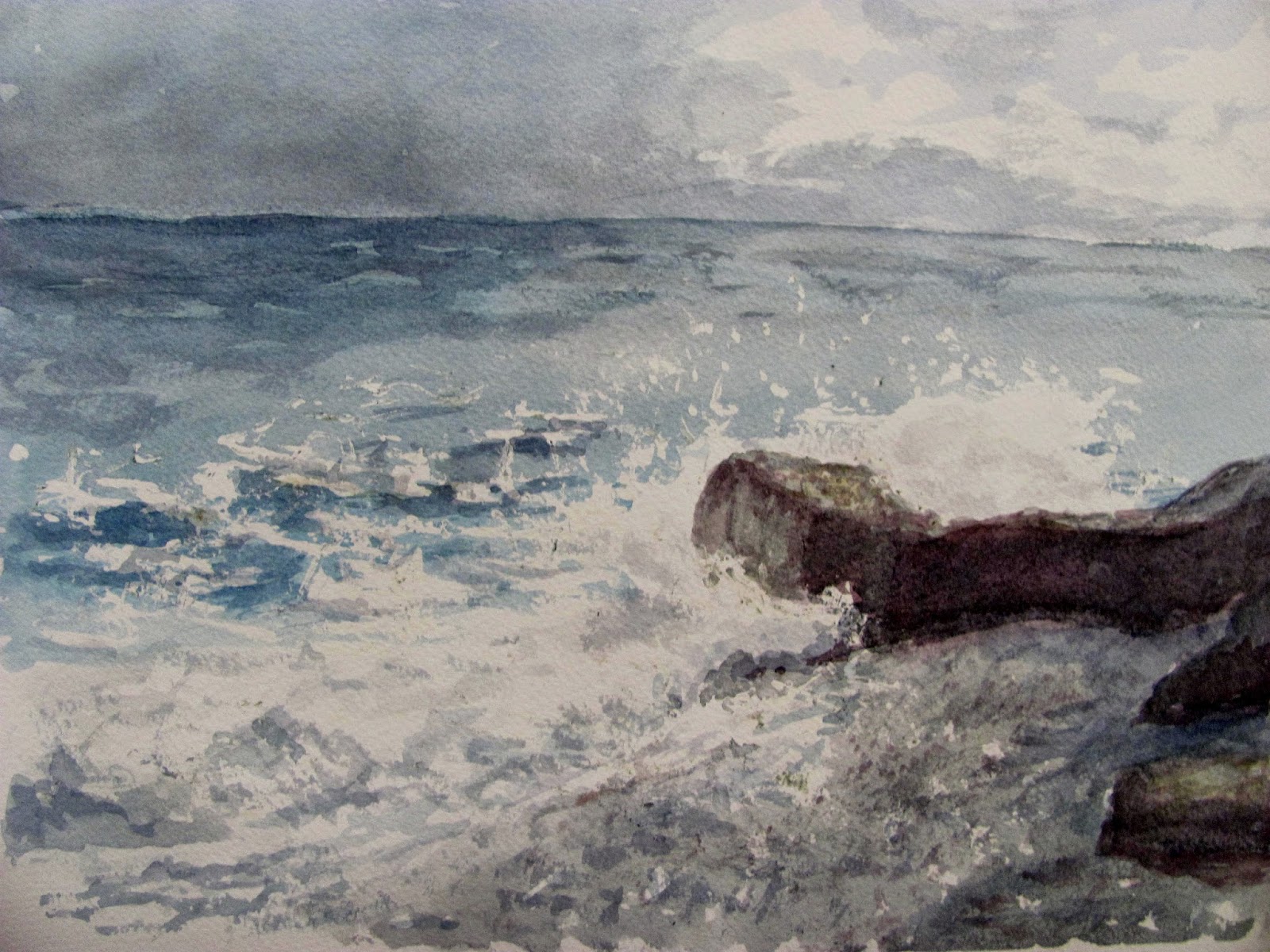 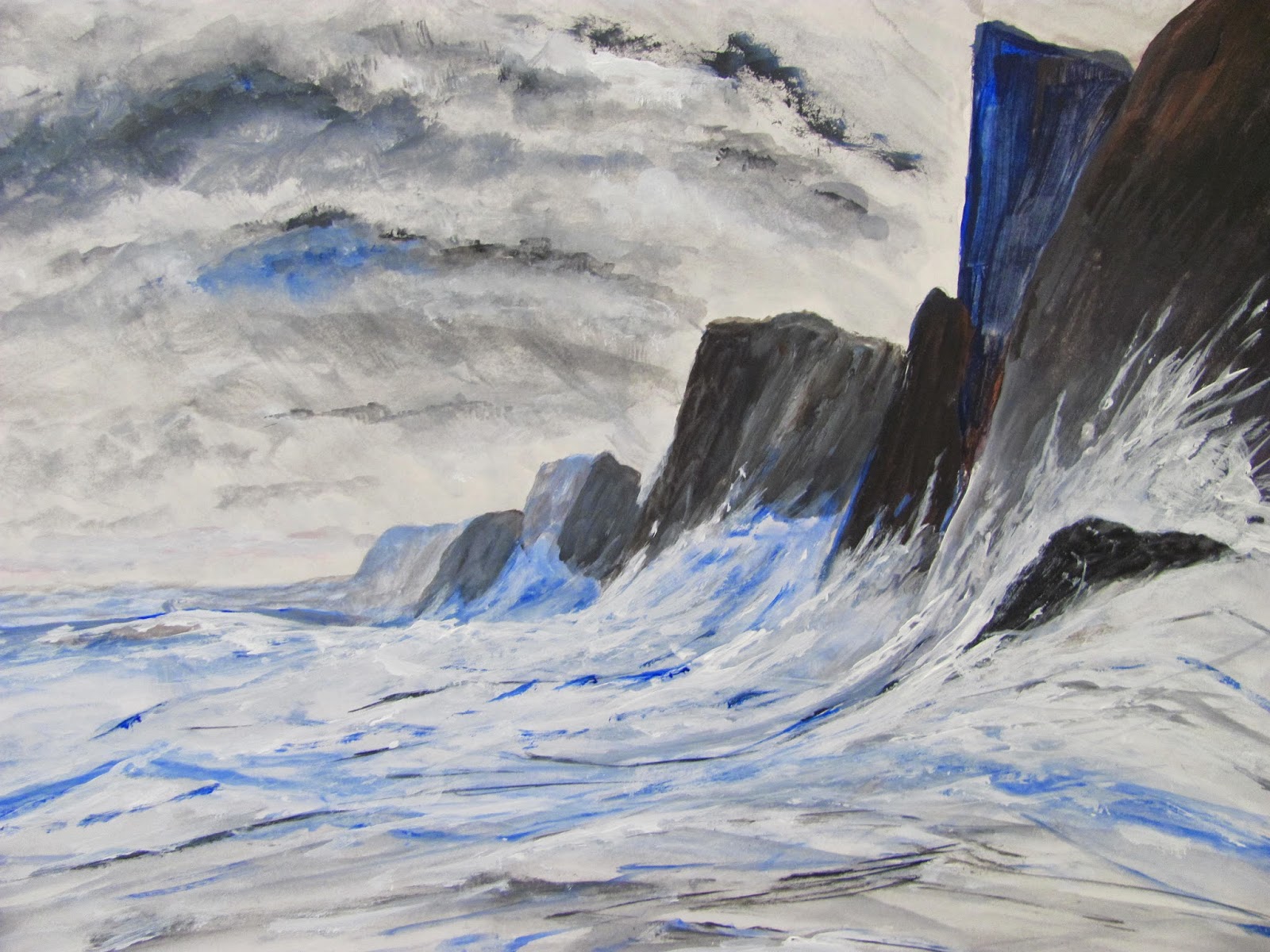 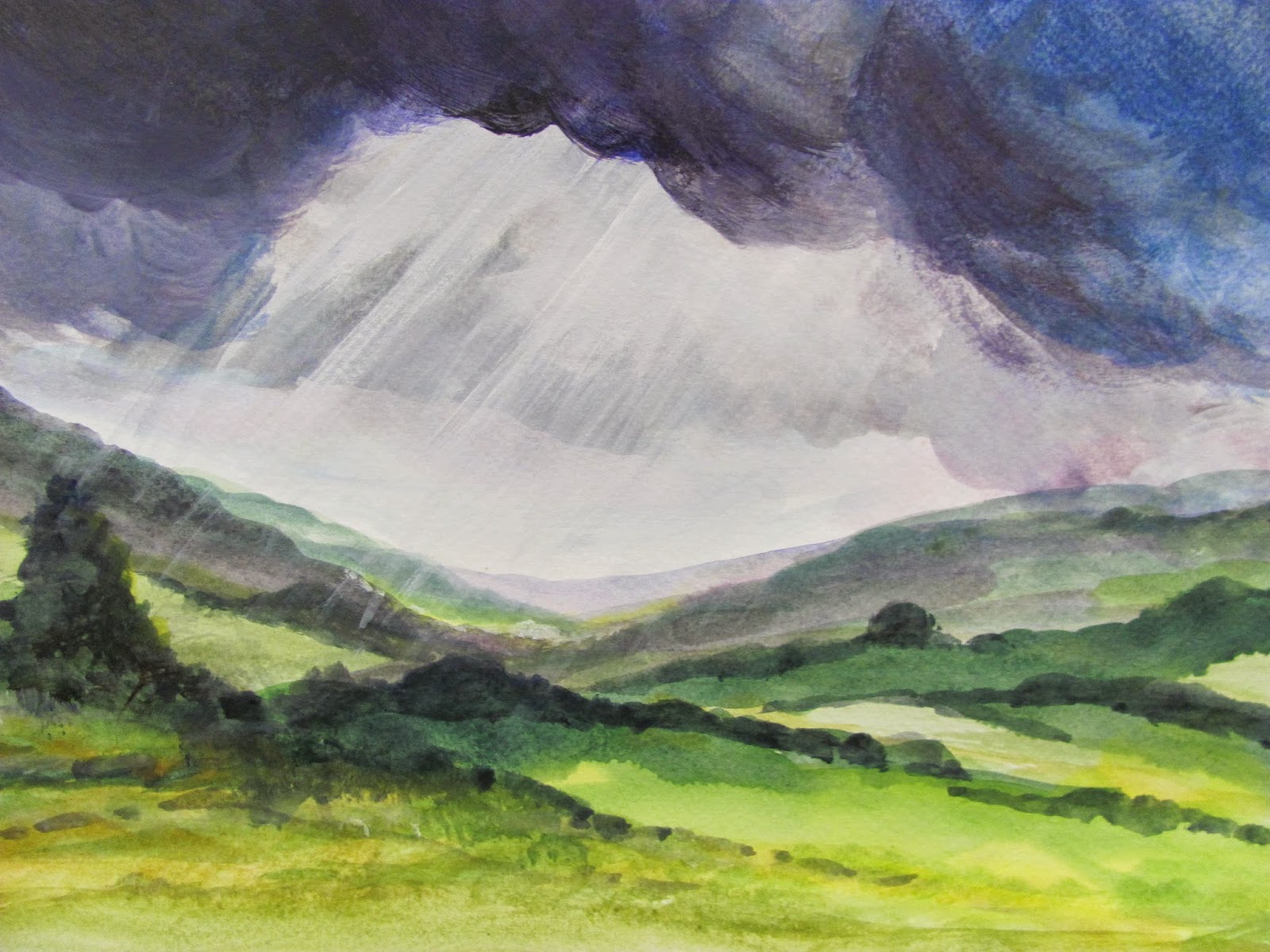 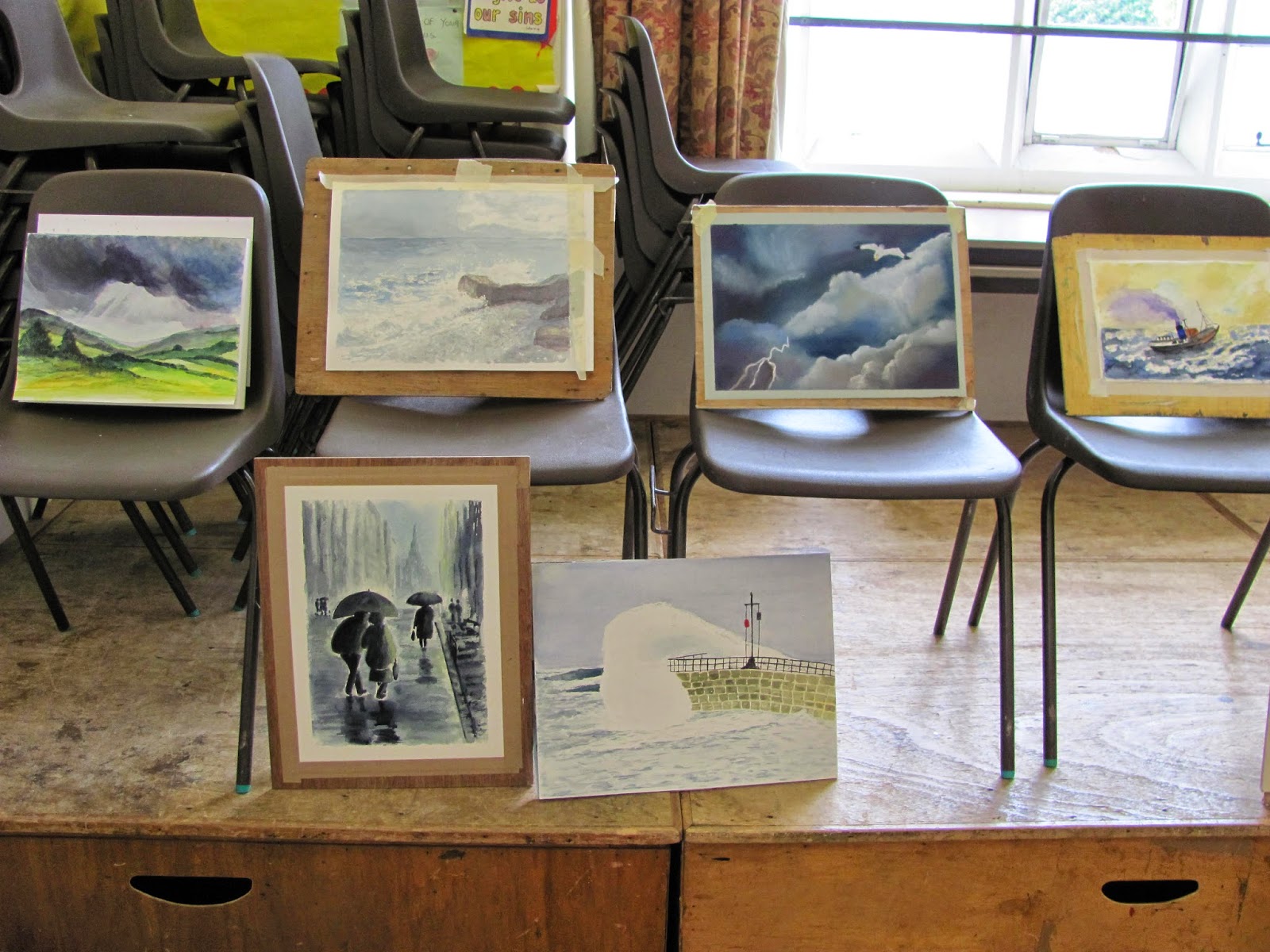 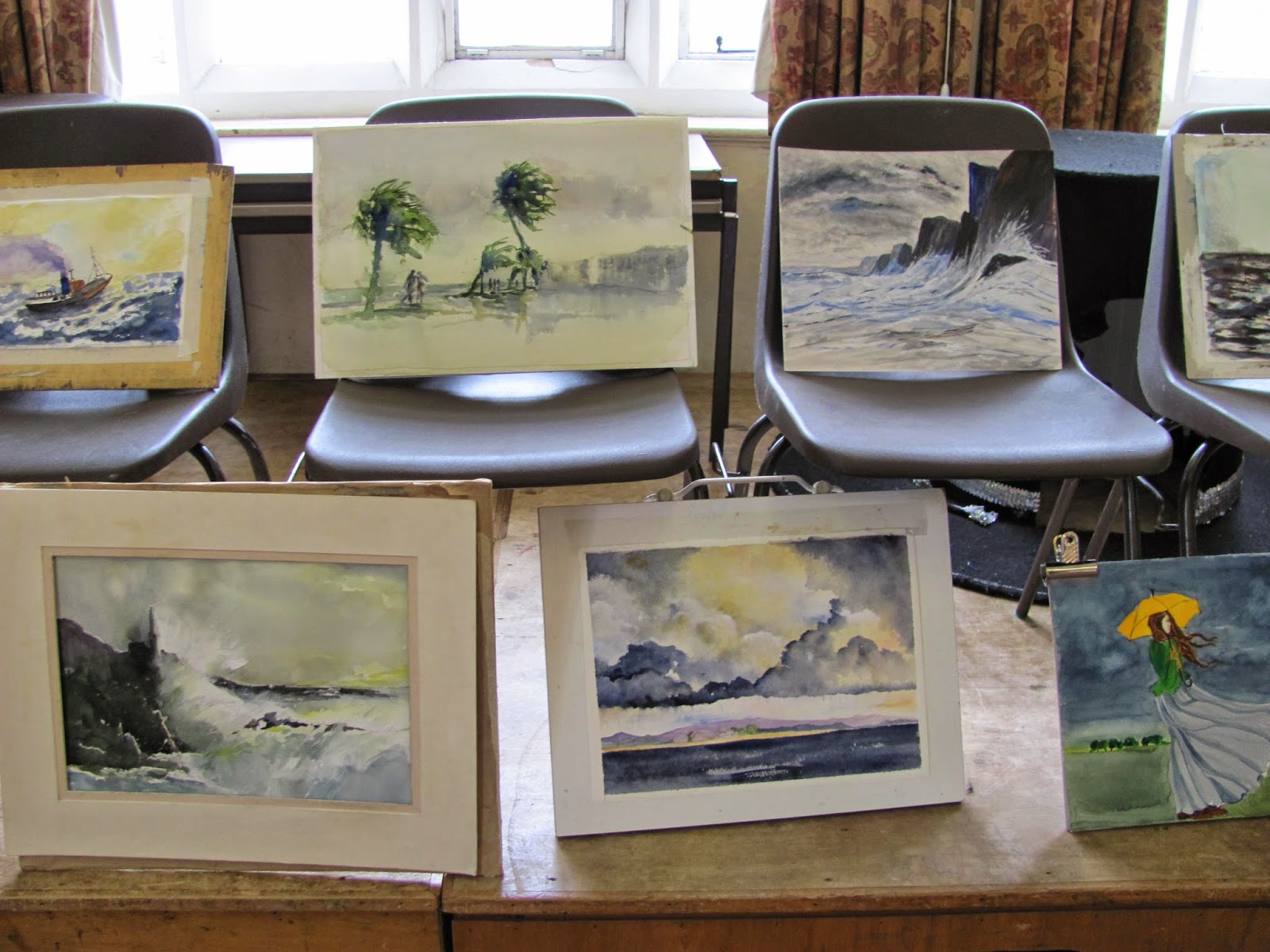 This is from a black and white - more sepia - photograph from the wonderful Facebook resource for old photos of American Indians `Moses on the Mesa'. 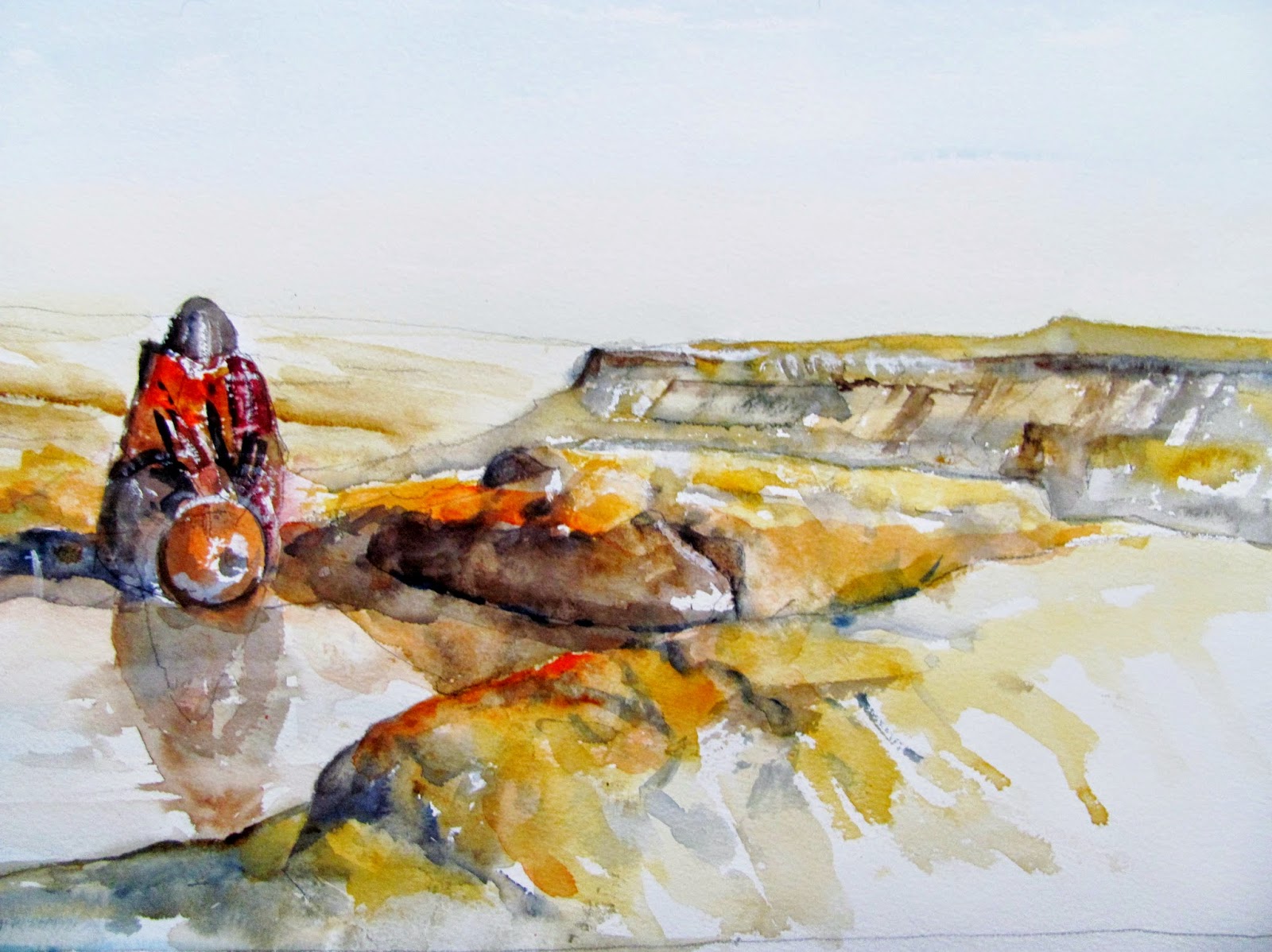 18" x 12" Fabriano Artistico, actually on the reverse side of a `failed' painting.

I was very taken by the original photo, although I realised it would be difficult to interpret. I'm not entirely happy with the above but can't quite put my finger on what is not  right. The original is in a sepia shade but as this is mountainous country - and she is getting water from a rock pool - it would be very hot and dry so I used `hot' colours like Quinacridone Gold (DS PO49) and some Translucent Orange (Schminke PO71) to try and convey the feeling of heat. Possibly I've overdone this. Otherwise mostly Raw Umber, Raw Sienna and diluted Cerulean for the Sky with diluted Raw Sienna for the far distance.

I made an initial drawing, not over detailed, and then painted starting with the figure. I then worked outwards away from the figure. The sky and background were painted last. I also tried to convey the feeling of distance. I'm tempted to have another try.

Usual Isabey Kolinsky sables, 4,6 and 8 with the da Vinci Artissimo mop for the sky..

These are some of my more recent efforts. Since moving painting has become more difficult in that I have had other things interfering, and so I've not been painting so often. 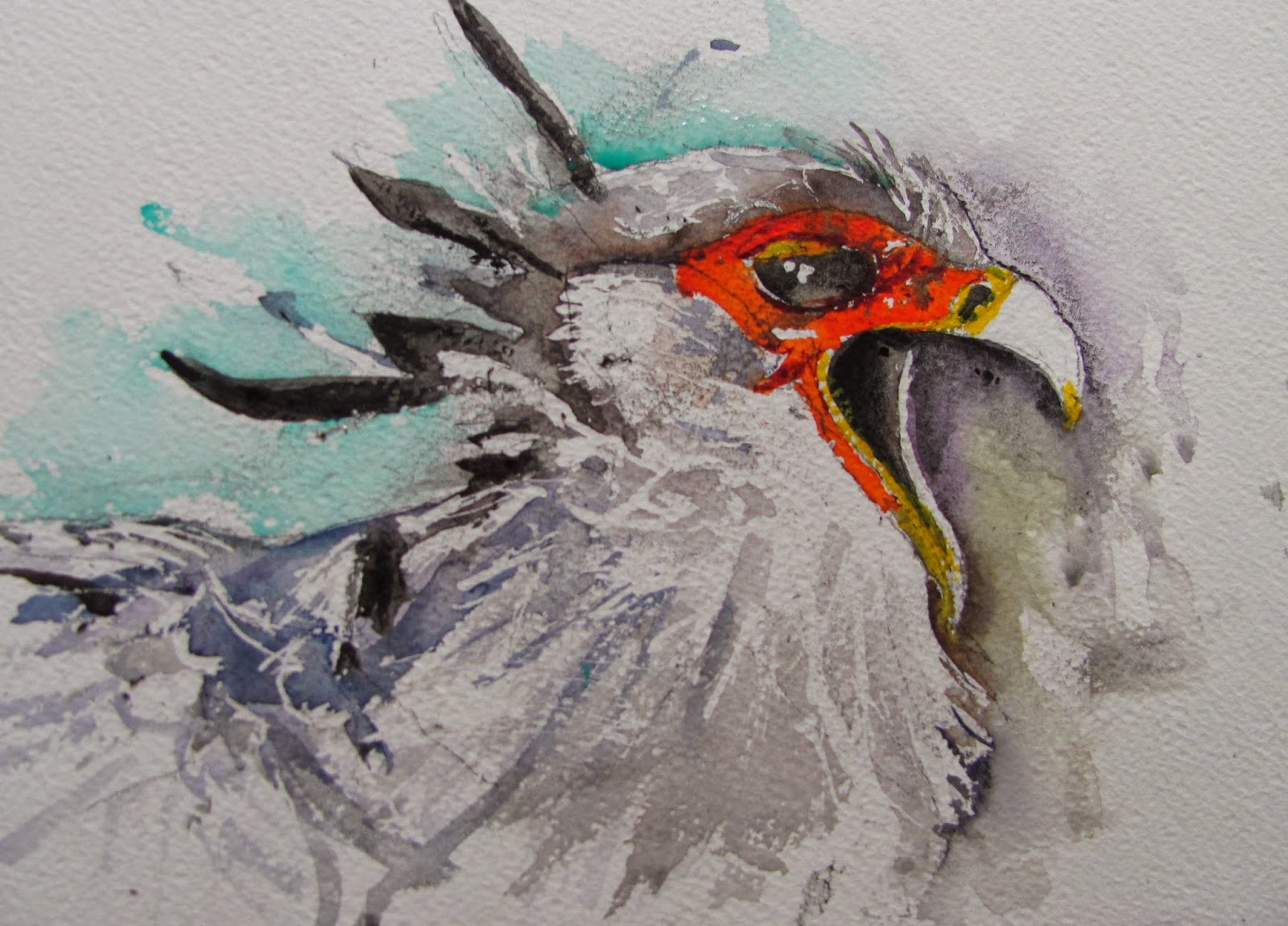 The Secretary Bird for the `Paint Colorful Birds for Fun' community on Facebook. I decided to do a head shot rather than the whole bird so I took the easy route! 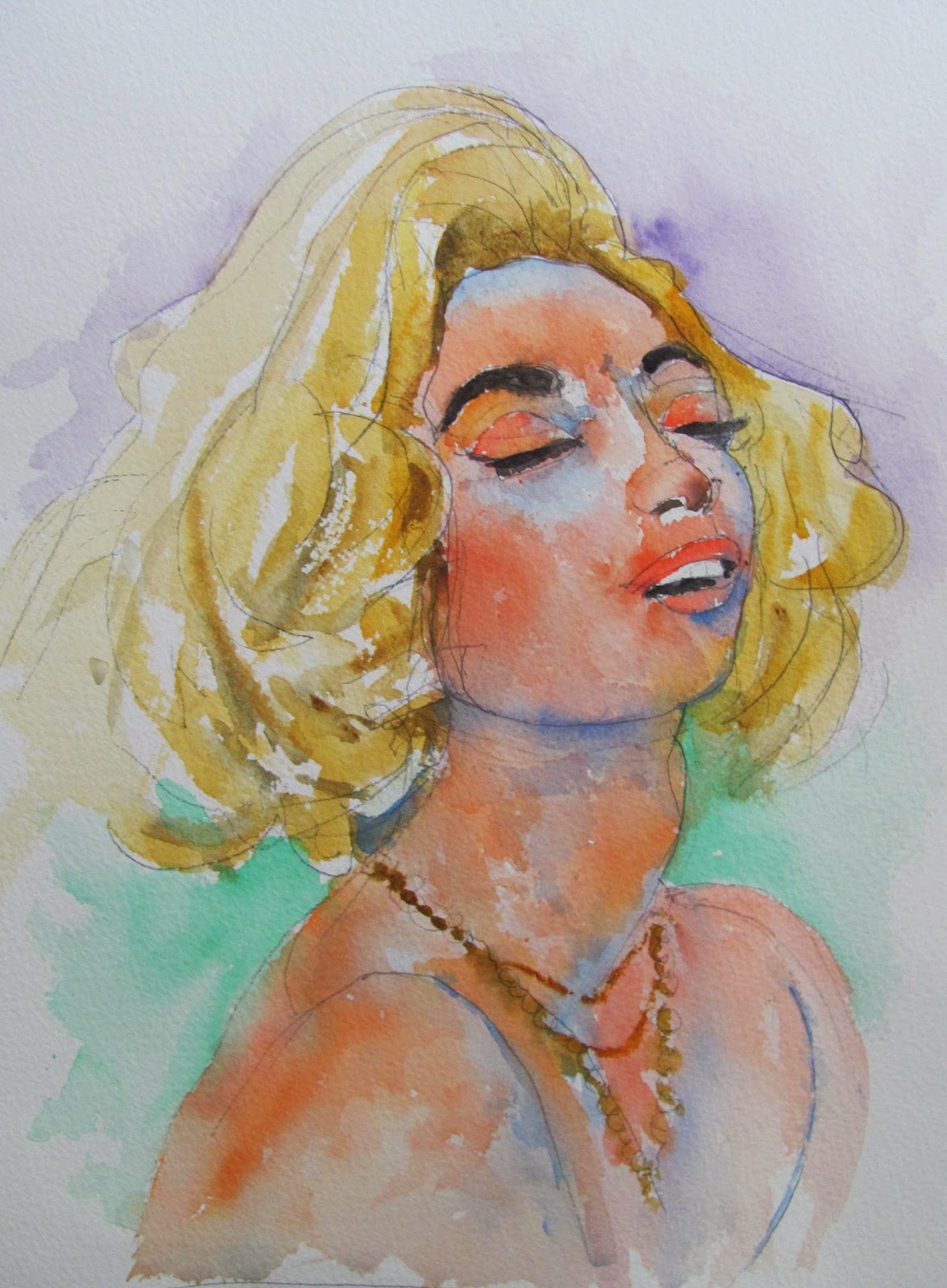 Beyonce - from a black and white cover photo in the Observer Weekend magazine. On the original photo both the hair and skin looked very bland so I jazzed this up a bit. 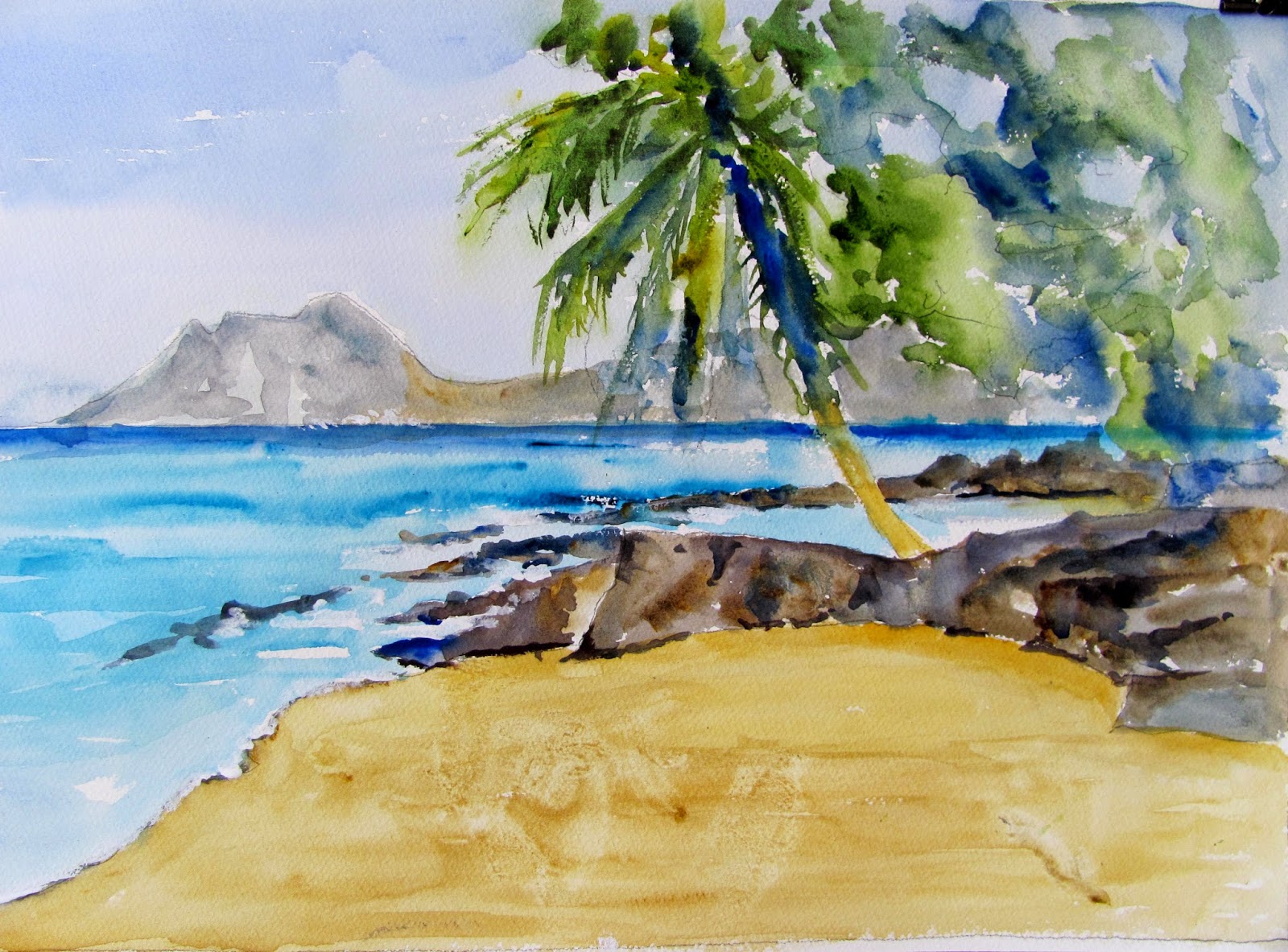 This was done for an AVA session titled `On the Beach'.