These are the latest paintings I've done mostly at Avon Valley Artist sessions.  I reiterate I don't post these as good just my current work. The only 'serious one' - by that I mean I was really trying - is the first one. I did have a record of her name but have mislaid it. It wasn't very lyrical though just several short indian words separated by hyphens. 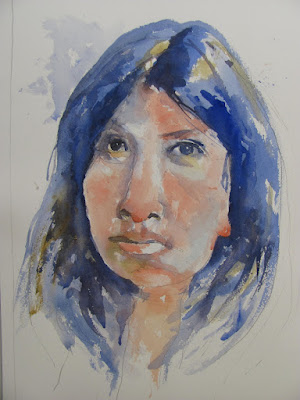 This was partially drawn at an AVA session then corrected at home. I then commenced painting. Finally I completed it last Thursday at the AVA session. I'm fairly pleased with the final result. You can see there is a lot of blue in the hair and the reddish skin colouring is Cadmium Red Light with a little Raw Sienna. 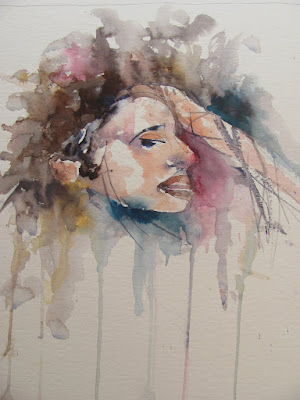 The subject last Thursday was 'Abstracts',  I decided to look at the book 'Realistic Abstracts' by Kees van Aalst for inspiration. In it are some watercolour portraits by Slawa Prischedko. I then looked up agnes-cecille (Sylvia Pelissero) of the Deviant Art movement. Her portraits are quite startling and not to everyones taste. I find them interesting but wonder where she gets her inspiration. They have the look of a tortured soul. Mine isn't so extreme but would fit (I think !) in the Kees interpretation of realistic abstracts. Comments welcome. It was fun to do though and is one way of loosening up. I used Cornwall paper for this one and it seemed generally ok. 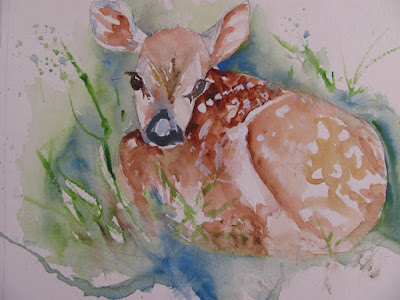 This was a wildlife subject at an AVA session 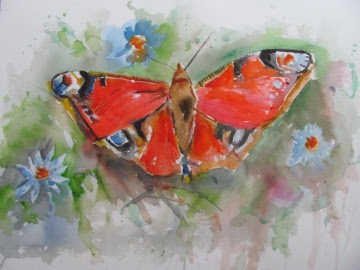 Same as the above.

Next week the subject is buildings - not my favourite subject - followed by Harvest Time. What I generally do is Google the subject then click on images, Usually something catches my eye, sometimes more than others.

Having recently posted on Holbein it struck me I'd never covered Winsor and Newton in detail. By this I don't mean an analysis of all the individual paints but an overview of the paint range, in this case the artists water colours. In addition to the artists range W & N have the well-regarded second line Cotman but that is outside the scope of the present post. 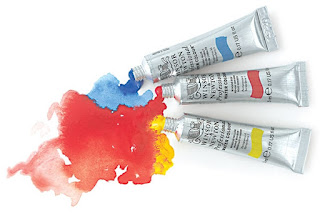 This and the following illustration show the new metal tubes introduced quite recently. 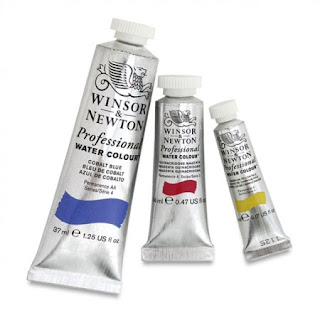 The tube sizes, left to right are 37ml (limited range), 14 ml, and 5 ml. Also available are half, full size pans and a limited range in giant pans. 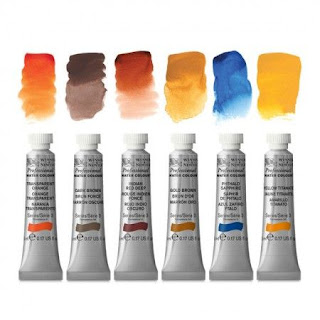 One of the limited edition sets of 5 ml tubes of which there are two. Expensive.

Winsor & Newton were started in 1832 by a scientist, William Winsor and an artist Henry Newton at 38 Rathbone Place, London. In 1837 they introduced the first glycerine based moist watercolours and patented the screw cap tube in 1844.  For many years they have been the standard at which others are judged and this is still partly the case although they are under attack by, especially, the American company Daniel Smith. Handprint while in general claiming the American makes, all much more recent,  are better than the long-established, mainly European makes, did not claim this with respect to W & N, although saying they were 'under competitive attack' by some other makes  of equal quality in many colours at lower prices. This mainly referred to the American market.

Unfortunately W & N are no longer British, having been sold to a Swedish company in 1990. Since then I believe ownership has changed again to a German corporation or multinational. Production of the artists watercolours has also been transferred to France. If we were able to untangle this web it might well lead to the Russian or Chinese governments. Only joking but who knows who owns what these days? Members of the Newton family were still involved into the 1970s but no longer.

The Range? 96 colours all but three of which are given excellent lightfastness ratings. Handprint always suggested you take manufacturers ratings with a pinch of salt and disputed quite a number. Here the three culprits are Rose Madder Genuine (NR9), Opera Rose (PR122 + a dye) and Alazarin Crimson (PR83). The original Opera is by Holbein and it acquired quite a following by mainly American artists despite it being known to be fugitive. W & N say Opera Rose is `significantly more lightfast than older pigments of its type'.  The W & N formulation seems identical to that from Holbein although they don't specify what the dye is (Holbein - BV10). W & N have an excellent leaflet that folds out into a large double-sided sheet containing much useful information. In terms of the information provided is goes beyond  Schminke. Transparency, opacity, warm and cool colours, everything is there with much else besides. Virtually every art shop I've ever visited who sell the brand has this leaflet.

There are some quirks in the range. Cadmium Orange for example is a mixture of Cadmium Red and Cadmium Yellow not the true PO20. They have the habit of giving certain colours the prefix of `Winsor', for example Winsor Blue (PB15), Winsor Green (PG36)  , two versions of each. Qinacridone Gold is now a three pigment mix that correctly should be labelled a `hue'. However everything is there and most paints are labelled reasonably correctly not the flights of fancy some indulge in. One of the standout colours is Permanent Rose (PV19) a favourite of many flower painters. I keep reading they are the most expensive paints in America apart from Bloxx but this isn't the case in the UK where,  although in the top tier of prices, they are competitive and cheaper than Daniel Smith. You need to allow for the fact though that the 14ml tube size is unique to them, although the web art supplier Ken Bromley has it's own brand in this size compared to others of mostly standard 15ml. It does make a difference. As for sizes I wish they would offer either a 21ml or 24ml rather than the huge 37ml. Even though the price per ml is lower it is still too rich for most amateurs.

I've used and still do W & N paints. I don't major on them because of my price philosophy but they are good quality and have a long pedigree. They are regularly on special offer in the UK and that's when I buy some. I'm sure Daniel Smith has given them a shock and the lights burn long in the marketing dept to counter this. At least when I queried them over the Cotman policy I had a long e-mail correspondence, rather than  no reply from either Daniel Smith or Maimeri. I got nowhere in the end but that's beside the point at least they replied. One result has been the introduction of 'special edition' sets, two so far, and it may be other initiatives will follow.  I've given my view on the special sets and will say no more on the subject.   Worth buying? Absolutely.

Here are this months batch of watercolour paintings to interest and (hopefully) inspire. Of course as far as styles are concerned 'different strokes for different folks'. This certainly applies in my case and I prefer in general 'loose' paintings however that may be defined. I do admire many others even though I don't aspire to paint like them. Perhaps it is a case of painting within my limitations, although anyone who thinks painting 'loose' is easy is mistaken because there is a very small margin between loose paintings and a mess. One of the secrets I've defined is that  the very best  artists who paint like this are actually really  good at detail and know how to put just enough in, which sets off the rest. Oh I wish! 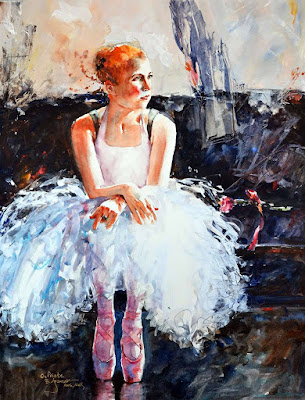 I like this ladies paintings very much. She alternates between acrylics and watercolour and I think the above is watercolour (?), although the actual results of the two mediums don't appear that different. 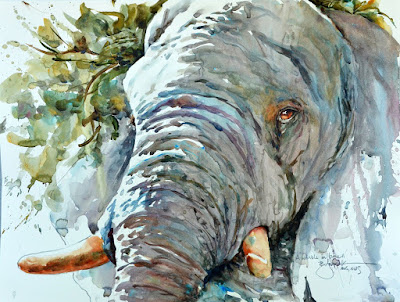 Artist? Not sure who this is - it could be Bev again -  but decided to leave it in. If I find out who the artist is  I'll put details in later. 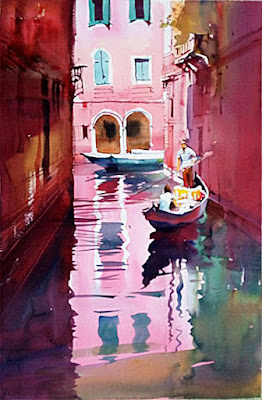 I'm not a fan of this lady although she has a large group of enthusiastic followers. 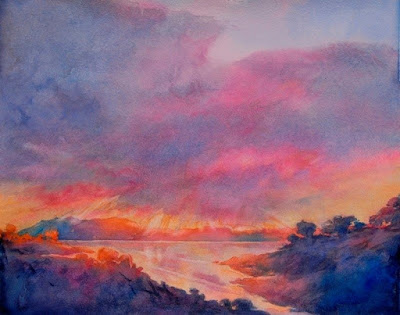 Virgil Carter - I first encountered Virgil - a charming and knowledgeable artist - on Wetcanvas. He has a very distinctive style using very bold colour. 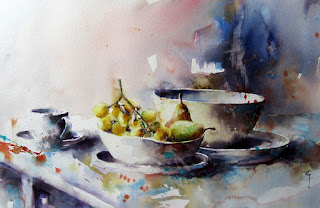 I love the work of this French artist. 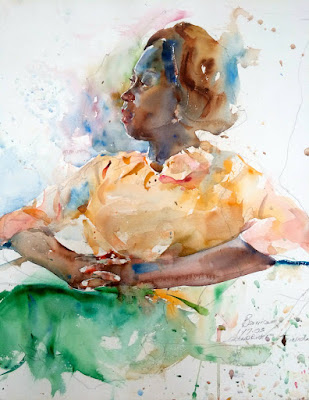 I am a follower of Charles Reid, who everyone reading this blog will know. Especially His portrait and figure work. 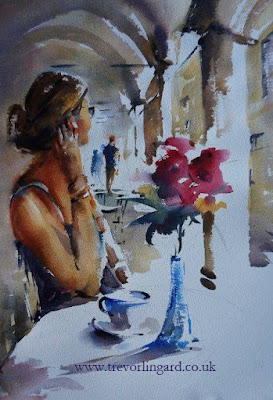 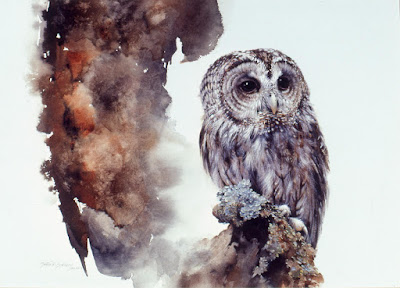 Super American artist who combines animals and the landscape in a way no other does. 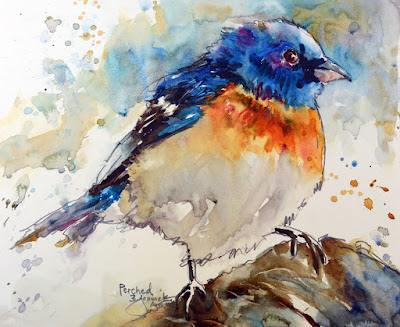 Another from Bev Joswiak 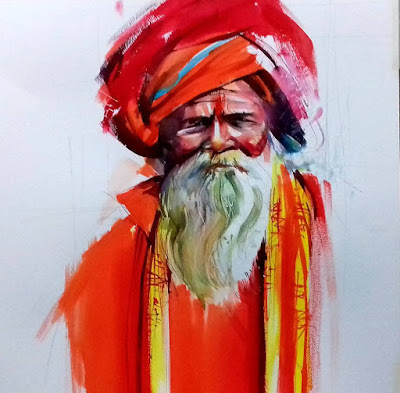 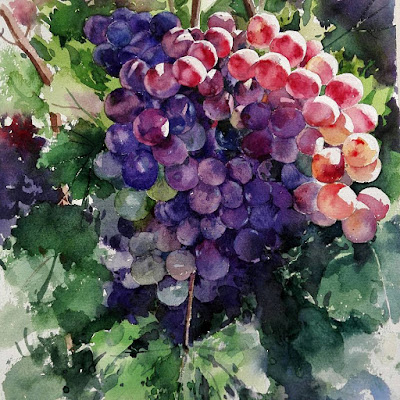 Sun Yu - unknown to me but quite superb. 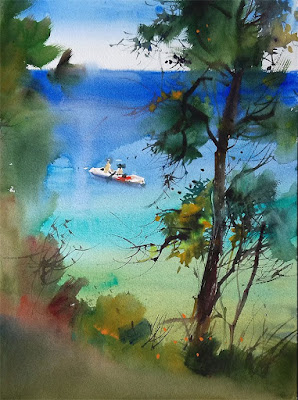 Another from Milind just to show his versatility 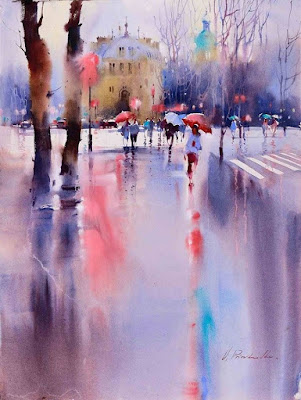 Who else but Viktoria Prischedko!