As readers of this blog will know I have something of an axe to grind regarding the very high price of watercolour materials, specifically paints. but also brushes and papers to a lesser degree. What has prompted this piece is the campaign by Daniel Smith (and others) to appoint 'ambassadors'- using well-known artists -  or other titles to promote their products. We get the usual stuff with the designated artist claiming they are the 'best in the world' or the best they have ever used 'etc etc. The latest instance had the artist squealing with delight and receiving posts from followers on her Facebook page congratulating her and 'assuming' she was getting them free.

I know Daniel Smith watercolour paints are very good but 'best in the world'? They certainly have the largest range at 200 plus and growing. They do include some unique colours. However do  we really need 20 plus or more shades in reds, yellows, blues, browns etc. On my dot cards many seem similar or have only minor differences. Who has a palette with 50 or 60 colours let alone 200. I would guess the average varies from about 12 to 24. Is it really ethical for these successful artists to encourage their followers or students, many of whom will be amateurs or hobby painters, to pay the very high prices charged for Daniel Smith in the UK? The late Ron Ranson told me privately that the whole thing about watercolour materials was a ripoff. Of course he wouldn't say it in print but personally used Cotman paints, less than a dozen, cheap brushes and Bockingford paper. The famous Chinese master Guan Weixing reportedly uses Cotman also. These are approximately one quarter the price of the Winsor & Newton 'Professional' range. There are many who will say this is their preferred paint for this or that reason and personal preference is a factor but the idea that they will help you produce better paintings is debatable. In the case of Daniel Smith the lure of many of these colours is hard to resist. I've fallen for it in the past and bought umpteen which you then struggle to incorporate in your paintings. Other top makes like Schmincke and Winsor & Newton now have over 100 in their ranges and this seems likely to increase. Maimeri have gone from 72 to 90 and even - most intriguing of the lot - Van Gogh a budget make increased recently from 40 to 72. 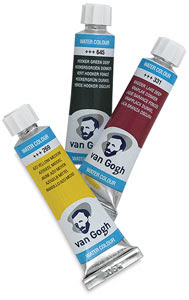 Some years ago I did a series of workshops with an artist who used and promoted Daler Rowney watercolours. He didn't say they were the best in the world but nevertheless his students took note. One of the participants, who knew him well, said they were provided free. Later this was withdrawn and the next thing was articles appearing in an art magazine promoting another make.

A few years ago I got into a spat with a well-known artist who was promoting various makes as 'the best in the World.' These included Da Vinci paints and Escoda brushes with the statement that Charles Reid used Escoda. I pointed out that on all the workshops I'd done with Charles Reid he used and recommended Da Vinci Maestro brushes. This was not well received and I got an unpleasant response and subsequently received further vitriol.  Charles was on a workshop in Spain and visited the Escoda factory where he was given the VIP treatment. In my final workshop with him he was using some Escoda brushes and not long afterwards a three brush set  with his name on the handle was introduced. Escoda have done this with several other artists and they are at slightly higher prices than the normal Escoda range, presumably because the artists get some sort of monetary return. John Yardley, who always previously used the Winsor & Newton Series 7 Size 10 brush (at over £100 each) also has a three brush set now from Escoda with his name on the handle. I'd clarify that I've some Escoda brushes. I bought a size 14 Kolinsky after examining one that Charles Reid was using, and have one or two others. They are excellent brushes but smaller size by size than makes like Da Vinci. Best in the World? I think Da Vinci and others would strongly dispute that. Very good certainly but that isn't the same thing. Does a name on the handle make your paintings better?

I know many artists struggle to make a living from painting alone. This is one reason we have them doing demonstrations, paintings holidays , workshops etc. However the successful artists who promote various products are - presumably-  far from struggling financially.  I am an amateur or hobby painter and the majority who paint are in the same category. Some are reasonably affluent but many are not. Is it really ethical to suggest amateur artists must buy the highest priced artists quality paints? I suggest the answer is no as there are quite a few much more reasonably priced makes that are perfectly adequate. In the case of  'artists quality' Sennelier, Lukas, Rembrandt amongst the European makes, and then you have Shin Han, Mjello and Turner from Korea and Japan.  New ones seem to be appearing regularly which includes house brands, all worth consideration especially for the standard colours. While I have some reservations about some of the Asian makes; if you look at them selectively and avoid certain ones there are many with good single pigments that are worth trying. The ranges are quite large, much more so than the recognised budget or 'student' quality makes. The new Van Gogh  range is worth a try. I've used them in the past and they were perfectly acceptable. With 72 paints (from 40) they have quite a few single pigments and some that haven't appeared previously in budget makes. I would avoid certain blues like Cobalt Blue  and Cerulean as they are combination of Phalo blue and white. I don't like paints with added white as they are  more opaque and , in my experience, tend to solidify in the tube after a relatively short period. The same reservation I make about multiple pigment paints due to the unreliable results  that can occur if used for mixing. One other way of saving money is to buy 5ml or 10ml tubes, where offered, of colours that are not regulars.

I'm not going to cover brushes or paper in detail as I've done so fairly recently. Naturally I can only do so where I've actually used them myself or looked at what recognised artists use. With paper Bockingford is the  most popular in the UK and there are also some good synthetic papers in the Hannemuhle range. I do agree it is desirable to use a good quality paper. It doesn't have to be hand-made but 100% cotton like Saunders Waterford, although increasingly expensive,  is my favourite in the High White not surface.  As for brushes I believe the standard of synthetic brushes is now very high, and while they may not be exactly like sable they are getting closer all the time. A good compromise are the sable/synthetic brushes readily available from makers such as Rosemary. The best amateur artist I know - semi professional in some respects - used Pro Arte synthetics almost exclusively - seconds at that - but has been impressed by Rosemarys sable/synthetics.

I have on occasion contacted some manufacturers with specific queries. In the case of Daniel Smith and Maimeri I received no replies, even to a second e-mail to Daniel Smith. Winsor and Newton, to their credit replied promptly and  - while not bending an inch - gave their reasons for not doing so. I disagreed and said so but what can I do? That's it folks.

Email ThisBlogThis!Share to TwitterShare to FacebookShare to Pinterest
Labels: Beware the Hype!

My Indian paintings tend not to be very popular.  I post the better ones on Facebook/ Google groups like 'Portraits & Figures in Watercolour' - which I started - and 'Watercolour Addicts' as well as my own Facebook page. When I see the huge number of likes some others get I admit surprise and puzzlement at times but there you are. I'll keep trying. The one below is my latest and I quite like it. Some of my older ones, when I see them now horrify me as they are so bad and they quickly end up in the recycle bin. I'm still, at this late stage, trying for a more consistent result but it remains elusive. 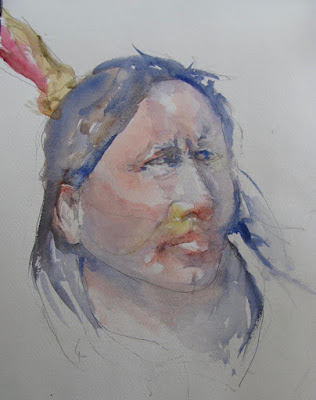 The overall affect is fairly close to what I was aiming at, although the eyes may be too close together. Resemblance to the guide photo is moderate but I don't aim for a  particularly realistic result. I have learned some lessons over the time I've been painting but it has taken longer than it should have done, partly because I took up watercolour - indeed painting - at a late stage in my life. Still I enjoy it !