When I reviewed Charles Reid's Watercolour Landscape Masterclass DVD I said I would shortly post a review of his `10-Lesson Course'. This has taken rather more time than anticipated as this is a three DVD set totalling four hours. Rather a lot to digest. I also had mixed views about it at first - not negative by any means - but I wanted to think about how to present a reasoned view and this involved several viewings and some thought. The reason I was in a slight quandary was how to interpret the value to those who are at different stages of the Charles Reid experience. Charles has many followers, of which I am one, but these vary from newly interested artists to those who have been following him for years. 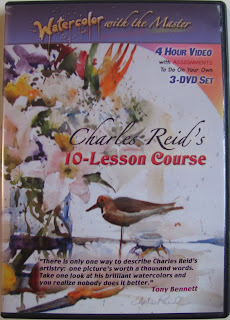 I already have 11 books and the same number of DVDs, all of which are either well-thumbed or well-viewed. As a result much of what appears has been well covered previously although not all at the same time. I especially value his book and accompanying DVDs `Painting Flowers in  Watercolour', North Light Books/David & Charles 2001 and his most recent  `Watercolour Solutions'. What happens here is that  information on Charles basic approach and all his tecniques are fully explored and then some. All of it is valuable but to someone like me the best sections are 9 and 10. This involves one of Charles magnificent flower paintings and he finishes with some interesting observations such as a discussion and explanation of triads. A disappointment is that portrait and figure painting don't feature at all but obviously to include everything would involve a four or even five video set which is impractical. Come on Charles lets have an up to date Portrait video! Figure painting has been covered in at least two other video releases, one some time ago, one more recent although both are still obtainable.

What do the video's cover? Disc 1  lessons 1 to 5 which involve setting up, brushwork & water to paint ratio, using local colour, mixing colours, tying in cast shadows and finally mixing greens. Disc 2 lessons 6 to 8 contour drawing and green still life, edges and emphasis and finally composition and contour drawing. The third part covers lessons 9 and 10 when Charles paints a large still floral life and then discusses mixing triads with a final review of the painting. As you can see everything is there and to those embarking on the Charles Reid experience this set is a must. As for fans like me I'm glad I have it and I think it is something to study now and then to avoid regressing, which I find is a problem. Of course I don't claim to be able to paint like Charles, much as I'd like to, but I keep trying and live in hope.

I was motivated to complete this review because the latest issue of The Artist magazine, December 2010, has an advert from http://www.paintfix.com/, who produced and sell the DVDs. They are offering free EU shipping until December 31st. Cost of the full 3 video course is $99.95 with individual videos $39.95. A good Xmas present!
Posted by Peter Ward at 03:48 14 comments: