Looking at the heading one might think what is this colour? The old colour was Brown Madder now replaced or replicated by this modern organic pigment. It is now known as Brown Madder, correctly a `hue', from Winsor & Newton, Transparent Red Brown from Daler Rowney, Quinacridone Burnt Scarlet from Daniel Smith and Avignon Orange from Maimeri. Some of these are favourites of several artists, probably many more, and make no mistake this is a great pigment. I have had Avignon Orange for some years but haven't used it much recently. Why I ask myself? Schinke added this pigment at the last upgrade to their range calling it Madder Brown. They recommend it for `portraits and nudes'. 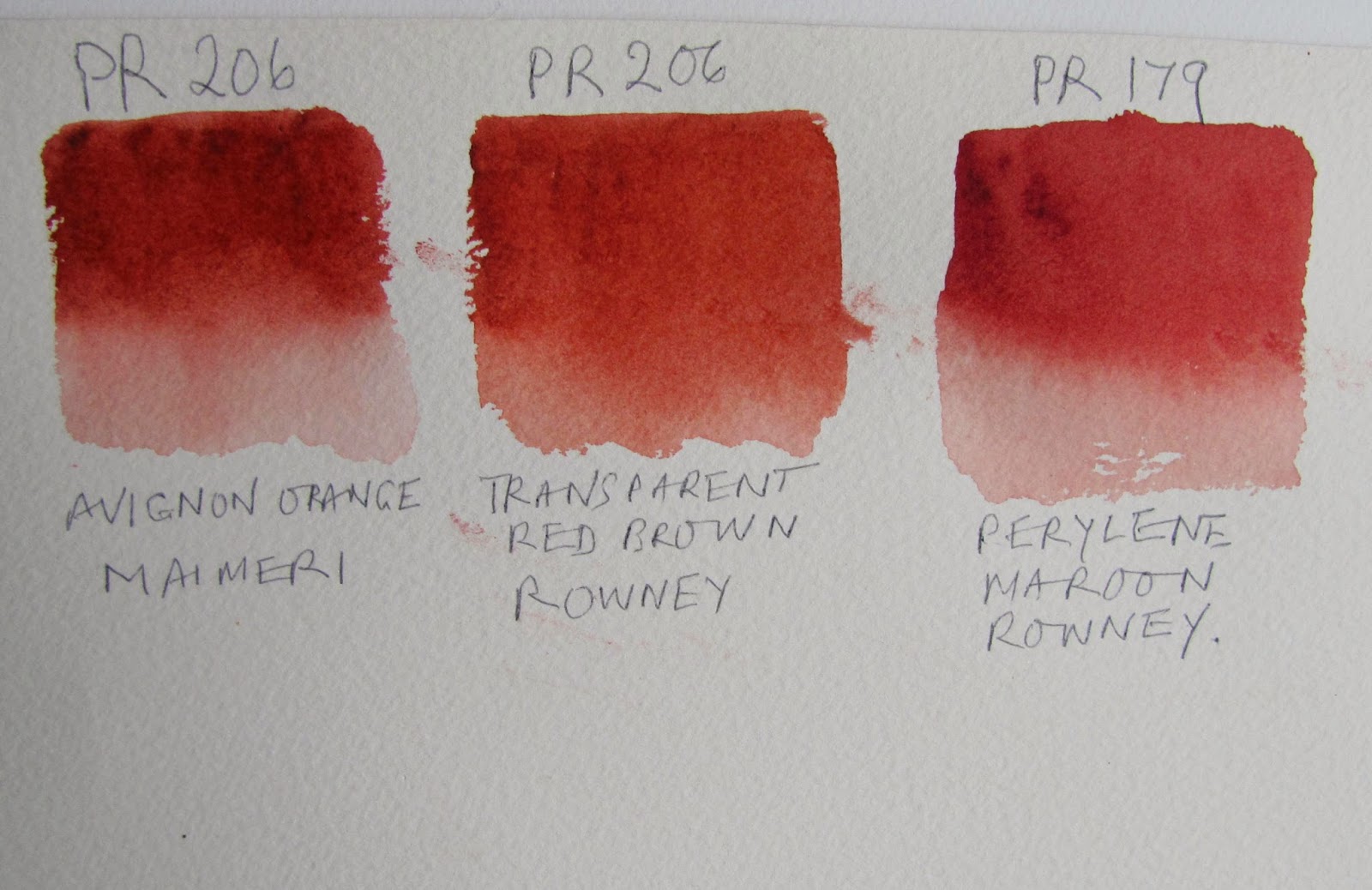 Not much difference between them is there? The Maimeri paint was from an old tube and when I squeezed it out liquid first emerged then pigment. This is separation due to age, so the paintout is a little streaky. I like the Transparent Red Brown but others might prefer the Perylene Maroon which is darker valued.

Added later : I've had a comment which seems to suggest I'm misleading readers as quote ` the two paints (PR206 and PR179) are totally different'. I've now looked at the Winsor & Newton chip chart and certainly the PR179 chip looks much darker than the adjacent Brown Madder PR206. As for Schminke I only have a printed colour chart (printed charts are generally considered much less accurate) but even so the Deep Red (PR179) and Madder Brown (PR206) don't look a million miles apart in colour shade.  You decide as paints from different manufacturers, even with the same pigment, can be very different. It all depends on the additives and the way the pigment is processed. However as you can see the above paints are not so very different and the swatches were freshly painted , although on further study the Perylene Maroon looks redder.

Handprint lists it in the earth colours and describes it as lightfast, semi-transparent, mildly staining, dark valued, and moderately intense. It's main weakness is a slightly weak tinting strength, which means it might be overridden by more dominant colours. Handprint recommend it for botanicals, portraits and landscapes and say it is a versatile neutralizing complement with a wide range of blues and blue-green pigments. The pigment database describes it as  `Dark Orange to Violet Brown'. Bruce McEvoy prefers PR179 Perylene Maroon because of its greater strength.

PR206 isn't listed at all by Graham, Rembrandt, DaVinci, Sennelier or Holbein. Some obviously prefer PR179 Perylene Maroon. It does appear in a few mixed pigments though. Looking at the rare Daler Rowney chip chart I possess  the two pigments are side by side, and while very similar, PR179 does appear slightly darker valued. Permanent Alazarin Crimson from Winsor & Newton has PR206 as one of the two ingredients.

If you decide to try this colour what to buy? As readers of the blog will know I'm pragmatic and combine price and quality in any decision when I buy. All these paints are good. A check today on Jacksons shows Daniel Smith the dearest at £10.92p while Daler Rowney is only £6.80p. No contest as far as I'm concerned but hang on Winsor & Newton is currently £6.87p! Maimeri come in at £8.60p with Schminke at £7.33p. Best buys therefore Daler Rowney and Winsor & Newton. Daniel Smith, however good, worth this hefty price? Not in this instance. As for Perylene Maroon the Rowney price is the same but Winsor & Newton put it in Series 2 at (currently) £8.89p.

Landscapes, Buildings and a Car!

I can't paint at the moment due to an accident, involving my right hand yesterday and resulting in a visit to the Bath RUH A & E. Still it could be worse I only dislocated my little finger - no break. I can just about type so here goes! This is another selection of paintings I've downloaded. Many of the artists are unknown to me but appear somewhere on Facebook. 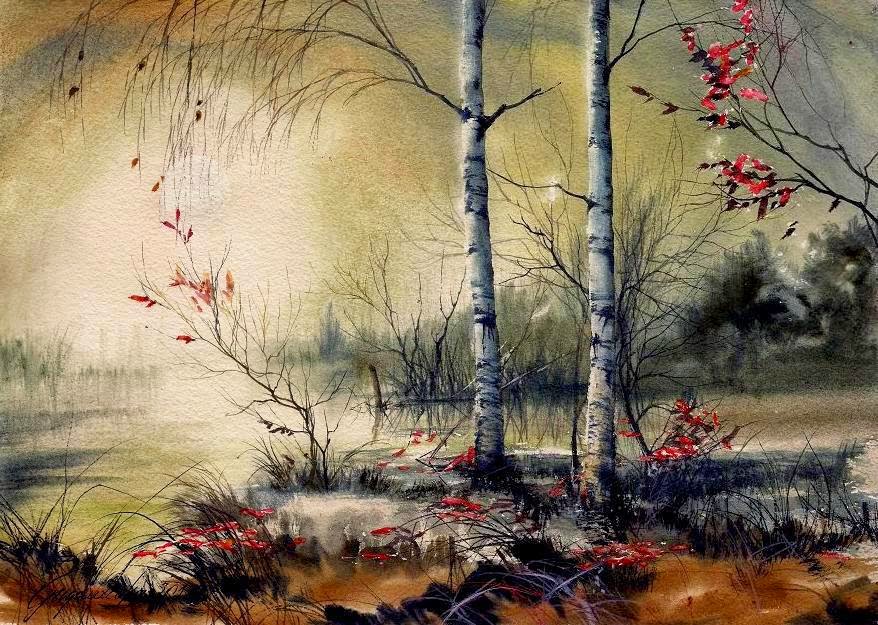 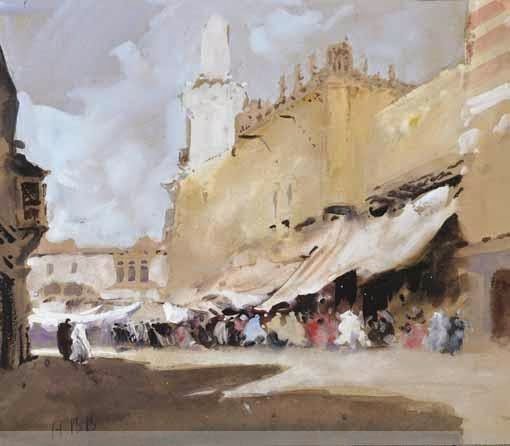 The famous Hercules Brabazon, master of the minimalist approach. Many of his best watercolours were said to be painted in thirty minutes. He didn't receive recognition until he was 80. 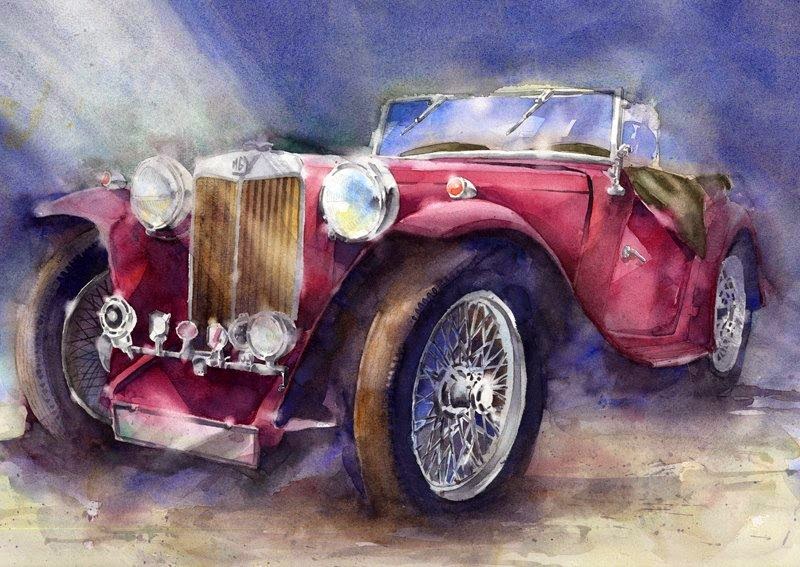 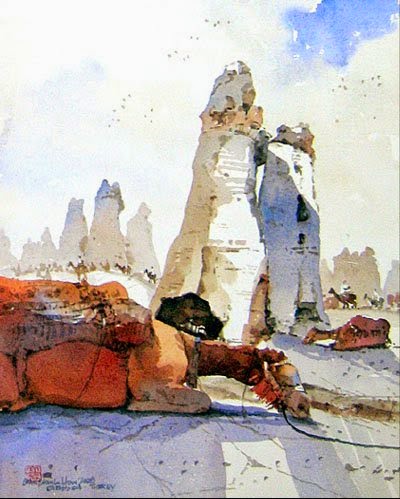 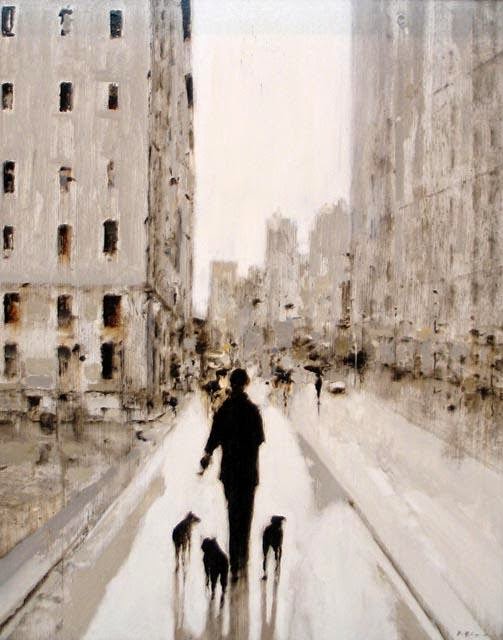 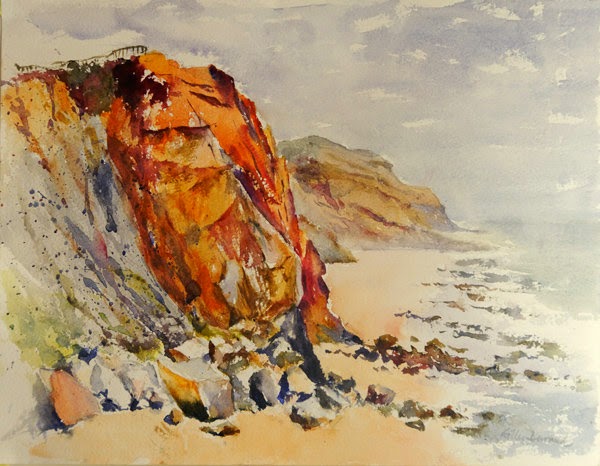 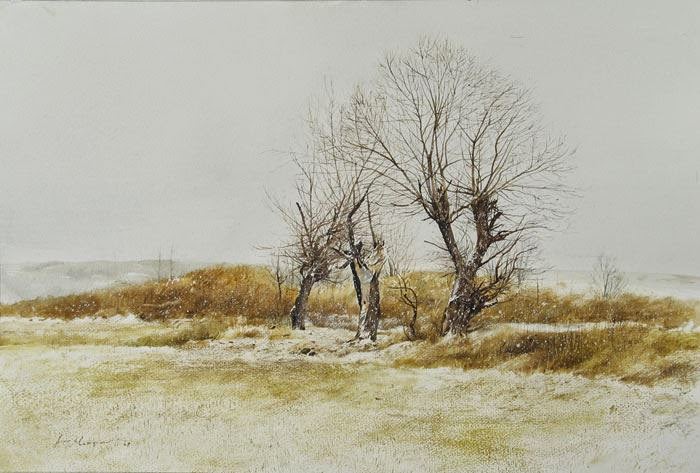 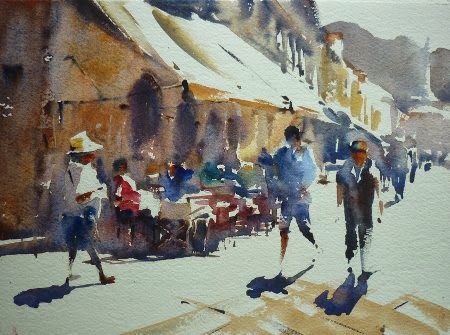 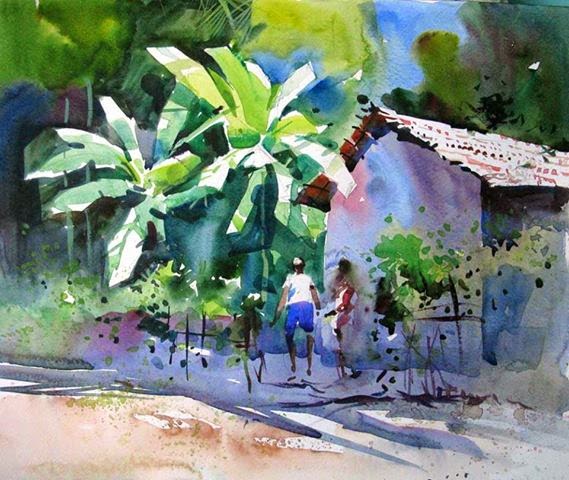 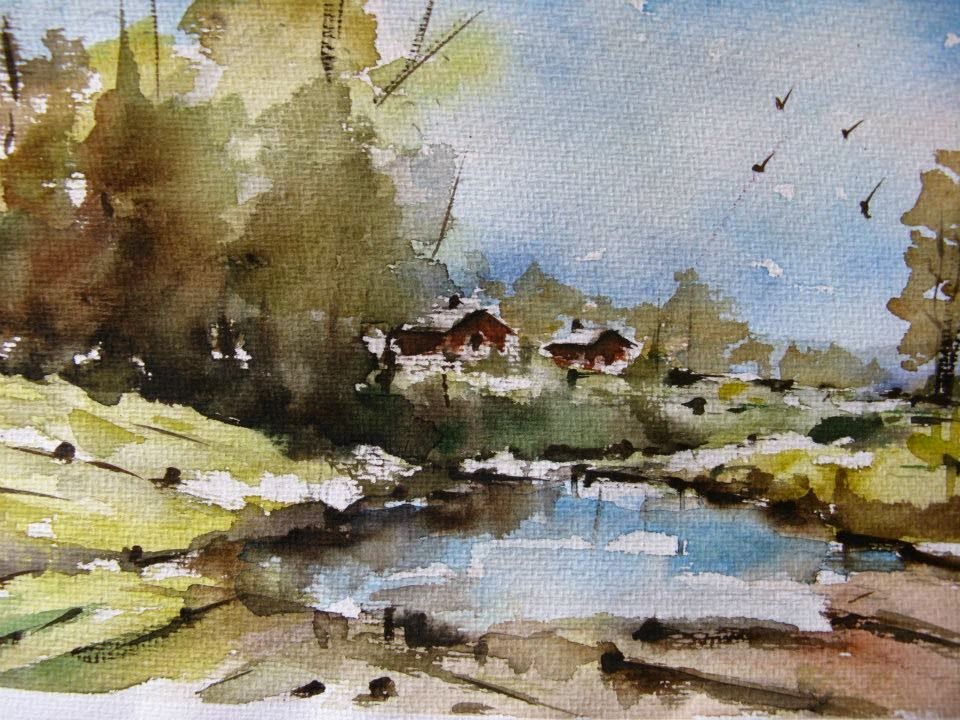 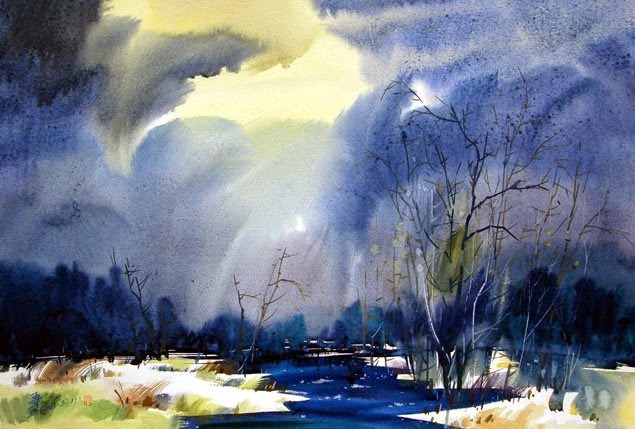 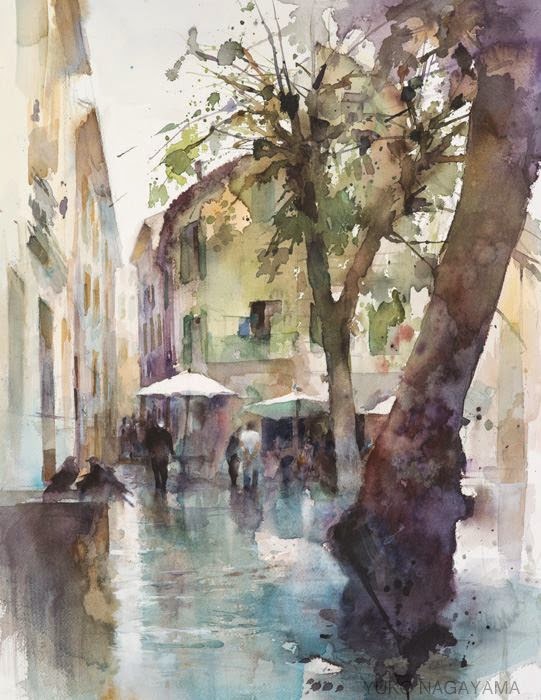 Yuko Nagayama - the famed Japanese watercolour artist. An unusual subject for her.

This then is a varied selection showing several different styles. Some you may like others perhaps not, but in general all well worth studying. I may not have the names quite right in a few instances so apologies if that is the case. Actually a few of the above aren't actually landscapes but interesting nevertheless.

"Phthalocyanine blue PB15 in its various shades (PB15:1 and PB15:6 are middle or reddish shades; PB15:3 is the greenish shade)...." so says Handprint,  but we also have PB15:0 which is also a red shade. Confusing isn't it? Presumably there must be differences between the various numbers but apart from the green shade all the remainder are described as red shades. I've only got the one shown below but have rarely used it.. 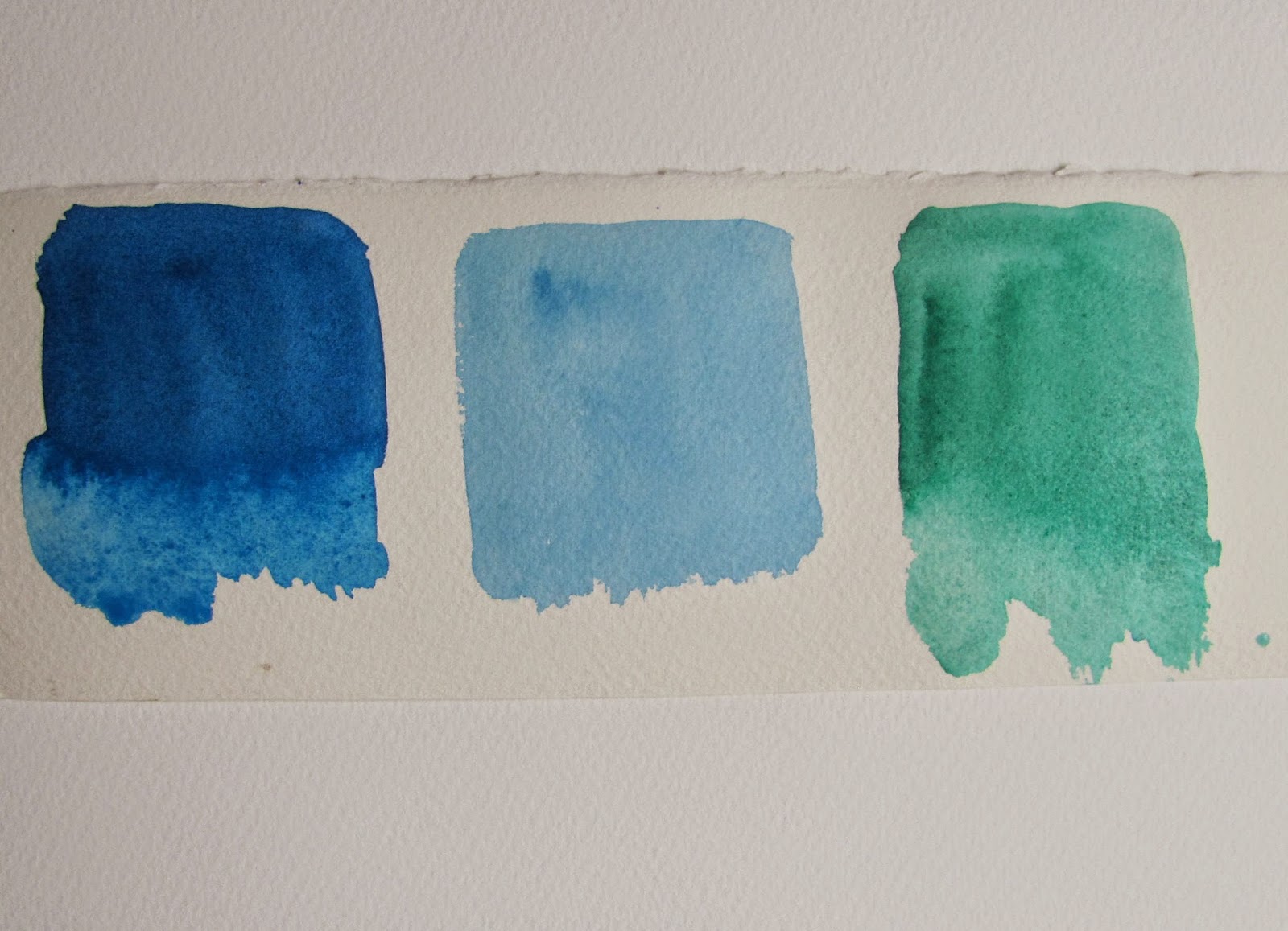 
This is a lightfast, transparent, strongly staining, very dark valued, moderately intense blue pigment described as a `workhorse industrial blue colorant'. In watercolours virtually all manufacturers offer at least one, and sometimes more phalo paints, and it also features in student quality paints, where, with the addition of white, it is used to substitute for the dearer pigments in Cerulean and Cobalt Blue.

While many call it variations of phthalo blue it also features as Berlin Blue (Maimeri), Helio Blue (Schminke), Winsor Blue (W & N) and Primary Blue (Maimeri and Lukas). Once again don't be taken in by names - check the pigment numbers. All these shades are usually in series 1 so are the cheapest of the blue pigments. The colour itself is on the harsh side, especially if used in a strong mixture but is less `in your face' if heavily diluted. Watch the staining though on your palette as well as the painting.

Is this a worthwhile pigment? The fact that everyone offers it in one of the above numbers suggests it is and it is rated as a good mixer. Winsor & Newton, offer both Winsor Blue Red Shade (PB15:1) and Winsor Blue Green Shade (PB15:3). Lukas (now owned by Daler Rowney) have several versions and it also features in Turquoise shades, Maimeri, Rowney, Daniel Smith, where it is combined with phthalocyanine green (PG7 or PG36) .

If you decide to give it a try then proceed with caution as it is an unforgiving colour and thought needs to be given as to where and in what subject(s) it is suitable for. That's my view others may differ.
Posted by Peter Ward at 08:30 4 comments:

This is a fairly quick study (11/2 hours with breaks) I painted it at the AVA `unofficial' session on Thursday. Only ten members were present and all did their own thing. I arrived there not knowing what to do so it was very much `off the cuff' so to speak. 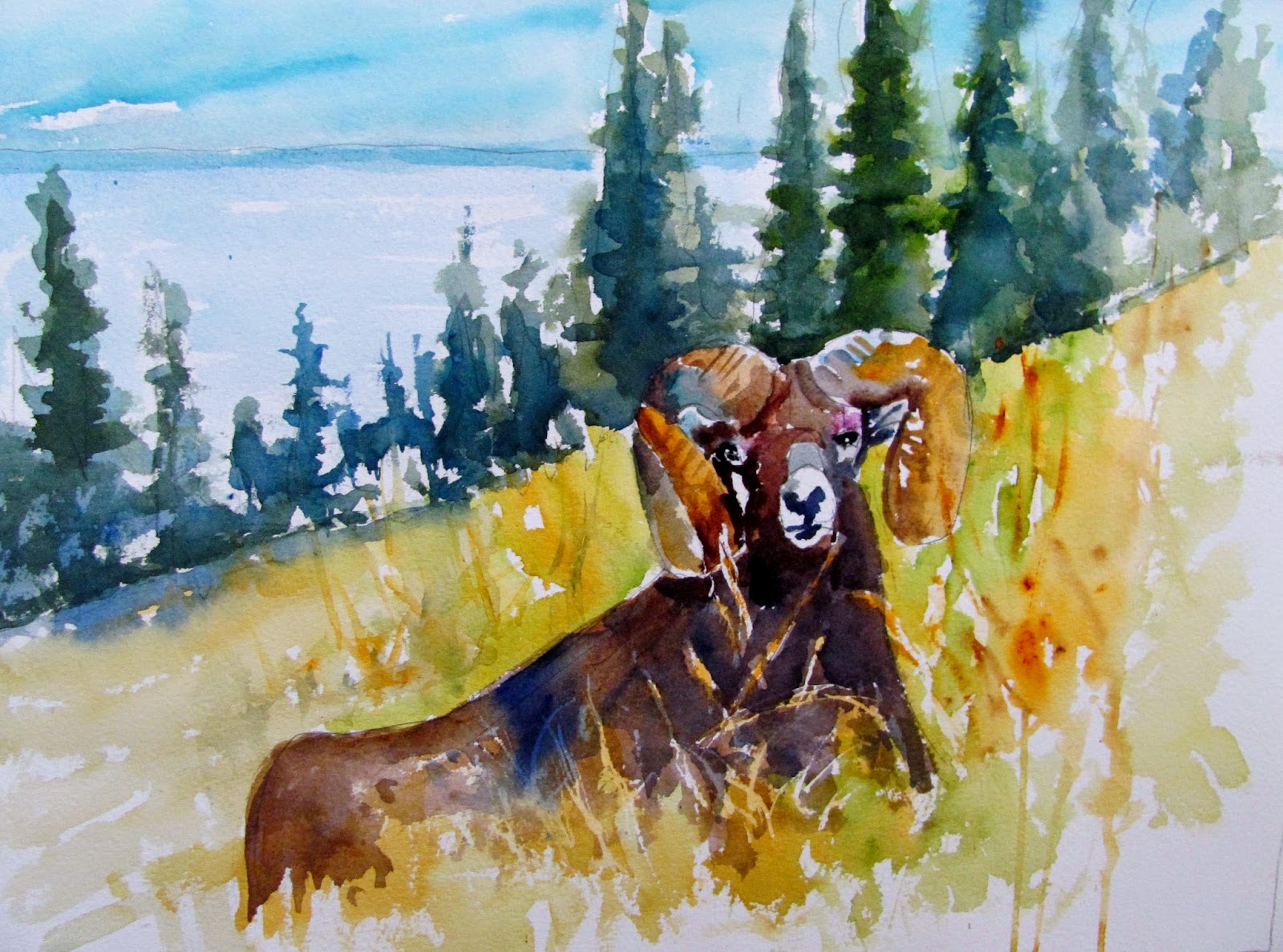 The guide photograph had another sheep to the left and further back but in the interest of simplification I left it out. I made a loose drawing, apart from the head where I was more careful. I also put some masking fluid on, the Schminke ammonia-free variety, a sort of milky white. This is the first time I've tried it so no real views as yet.

The original guide photo is of a very large panorama, which I changed by making the sheep much larger and making it the main feature. Colours included Green-Gold (PY129), Sap Green (Graham), Quinacridone Gold (Daniel Smith (PO49), Cerulean and Phalo Blue (PB15). Greens for the trees were mixtures of yellows, Hansa Yellow Medium (Daniel Smith PY97), Indian Yellow (Rowney (PY153) and blues, mainly Ultramarine (PB29).  Its a mixture of hot and cold with the `hot' colours in the forefront and the `cool' receding into the distance.

Usual brushes, only two or three Escoda and Rosemary retractables.