These are my latest efforts. The first in response to the subject `Flowers', the other just a quick 40 minute painting to fill in time as I always finish earlier than the  others. 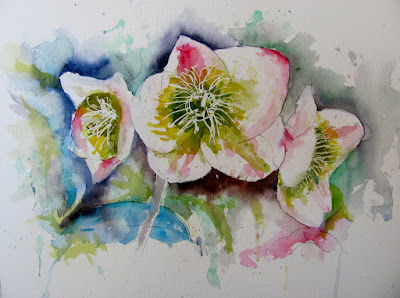 I think it okay - nothing special though. I used masking fluid where the `whiskers' are. 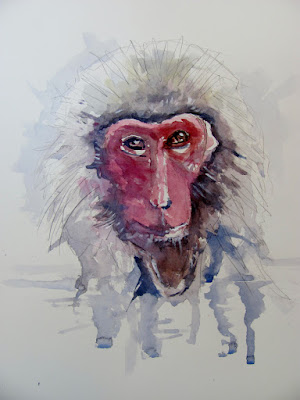 This is a simple study of a Japanese Macaque monkey. These amazing creatures live on a mountain in Japan and in the very hard winters, with severe ice and snow, immerse themselves in the hot springs that luckily for them happen to occur there.This took about 40 minutes at most.

Although I haven't been painting as much these days I do try to maintain a reasonable rate and the following are recent efforts. I stress they aren't shown as good paintings just mine. 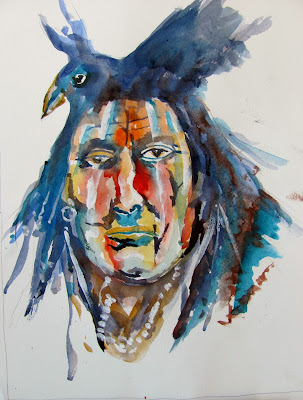 This particular painting was in response to the most recent AVA subject which was `Rainbow of Colours'. I decided to do another of my Indian portraits but colour it up with a `rainbow of colours'.Does it work? Not sure but I did study a number of artists who paint portraits using a surrealistic array of colours and don't worry about realism or a good likeness. My wife took one look and described it as horrible! It is true though that, when painted for war or even involved in ceremonials, some of the Indian warriors looked pretty ghastly, the idea being to frighten their opponents.He is wearing some sort of cap on his head which seems to incorporate a dead rook.

The following was started when I finished early and completed it  the following week. I like animal subjects and have a number of studies of Orang-Outans ready for future paintings. 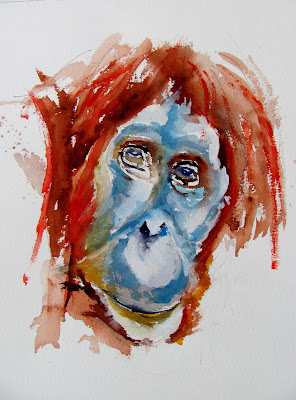 The following painting was in response to a subject called `Roofs and Chimneys'. 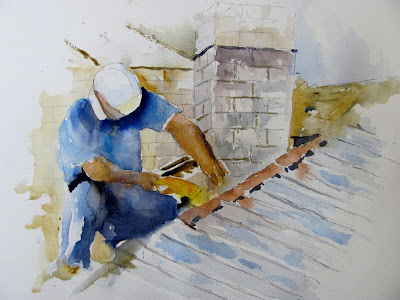 Although I wasn't enamoured of the subject in the end I think this works quite well. Limited range of colours, blues, browns and yellows, some greyed down..

Email ThisBlogThis!Share to TwitterShare to FacebookShare to Pinterest
Labels: my paintings

My recent piece about the latest Winsor & Newton limited edition set raised a number of interesting questions. One of these was what was the point of buying them and wanting more, when you would be unable to buy replacements? Primarily due to the researches and knowledge of  a Facebook friend Zvonimir von Tosic we now possibly have some answers. I know that many artists are not that interested in pigments as such but it is a subject that fascinates me, even though I don't claim great technical expertise in either knowledge or approach. Without Zvonimirs input this piece would not have arisen so I am greatly indebted to him for discovering things are not as simple as they sometime appear.

Previously I have always consulted Handprint - and still do  - even though Bruce McEvoy ceased to update it several years ago.Much is still relevant but like all things nothing stands still. The pigment database- artiscreation.com/ColorCharts.html - is also a good source of information but quite technical. 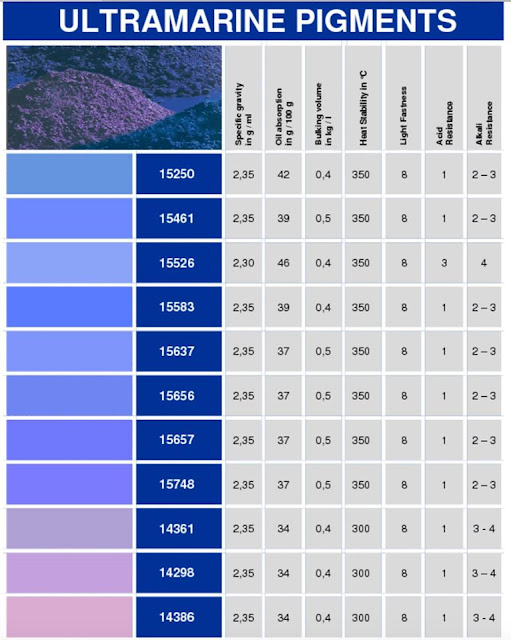 Here is what Zvonimir has to say and I quote him in full:

"All right, I think I have an answer Peter. I have explored a little, so here is a brief summary. When producing certain types of pigment, say PV15 (this is one of the pigments used in a paint they call  `Smalt' in the latest W & N limited edition -PGW)., pigment manufacturers can obtain different `shades' of the colour, perhaps hundreds, depending on manufacturing process (errors, trials, beginning of run, end of run, stability of process etc).

However when analized spectographically, the wavelengths of all those batches are still within the acceptable range to be named PV15. But, our eyes being very sensitive to nuances, can tell the difference. In your tests of paints made `from seemingly same' pigments, but coming from different paint manufacturers like W & N, DS or Schminke, they may appear to differ. Therefore numbers`after' the number 15, and all manufacturers try to buy batches closer to their chosen shade.

What if all of them want to buy same, and at the same time, and there isn't enough ?

See chart (above). It shows variations on PV15 and PV14, which one pigment manufacturer is able to obtain( or has saved them in stock) in quantities ready to be utilised. They may keep batches piling up, or offer them to some paint manufacturers at a discount, who can make an interesting product out of them.

W & N reads industry newsletter, makes a phone call, takes a few tonnes of (PV)15583 for example, which looks bluer than what they used to buy for PV15, (in this case it may look like old Smalt). W & N purchases it, makes a limited run tube paint - perhaps because the manufacturer of that pigment does not or can not produce that specific variation in large quantities, and W & N knows what their users normally buy, with what types of colour shades users are happy with and can appreciate.

Colour recognition is a cultural phenomenon, and they play by the rules"

This has certainly widened my understanding of this subject. As said many may not be interested but to me it goes a long way to explaining why Permanent Rose from W & N (PV19) is such a favourite. And this applies to certain colours from other makers. I was aware that there are variations in pigments and have done posts where this has been highlighted,  for example PV19  where we have  red, rose and violet shades.

One thing puzzles me slightly. Basically pigments are in two categories, natural and synthetic. With natural pigments like the earth colours there is considerable variation in shades, but I can understand this as they are mined and colours vary. Although it has been said these natural supplies are running out, and synthetics (PR101)  are replacing them,  there are still many available sources, perhaps not in such  large quantities. If you visit Provence you'll see this with shops selling nothing else and all sorts of colours visible in the rocks. In the Forest of Dean about thirty miles from where I live, between Bristol and Bath, are Clearwater Caves, a tourist attraction. Several earth colour shades are still mined there and sold in the shop, and on the internet I believe.

With synthetics I would have thought they would be more consistent, being produced by a chemical process. I know the final result is determined to some extent by how the paint maker process the pigment and what additives they use. 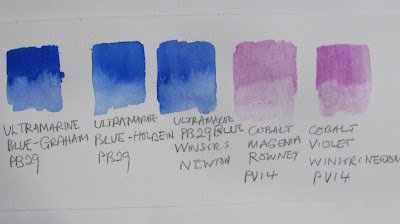 Here are five swatches, three of Ultramarine, two of PV14. The Graham Ultramarine Blue looks much darker than the other two but this may be my fault. Holbein and W & N look much closer. The above swatch is actually W & N French Ultramarine, and they also offer an Ultramarine `Green Shade'. With PV14 I've had problems with the Rowney version changing colour, a sludgy brown, and going hard in the tube. Another violet shade PV16, from Graham gave all sorts of problems and even the so-called final one - the third I received, using pigment from a different source according to Graham, has now also bitten the dust and has set like concrete!

As a final word Zvonimir has established from Graham that nowadays the same pigments are used in oils, acrylics and watercolours and the particle sizes are the same. This was apparently not so in the past.

Email ThisBlogThis!Share to TwitterShare to FacebookShare to Pinterest
Labels: pigments

Here are the latest batch of watercolour paintings. Once again a mix of artists old and new, some well-known others not so. I also try to show a mix of styles so that there is something for everybody. 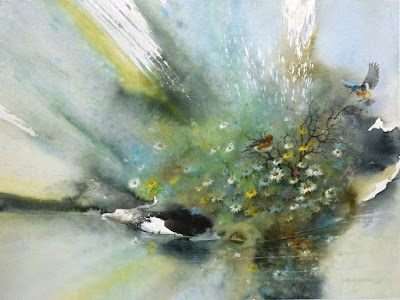 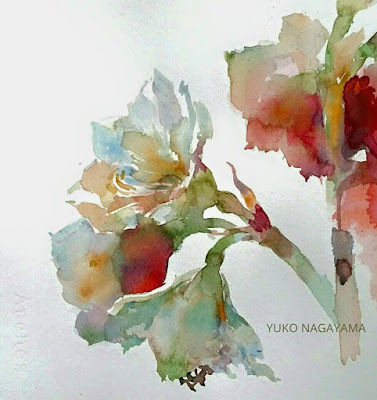 Somewhat different from her normal work. 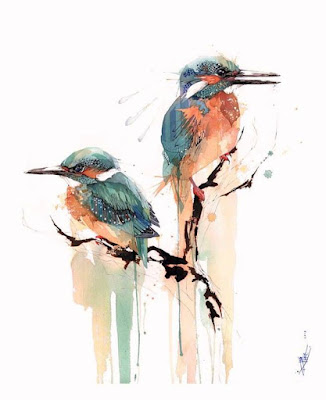 Don't know this artist but love this study of Kingfishers 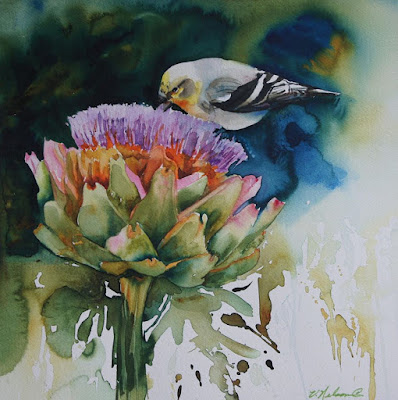 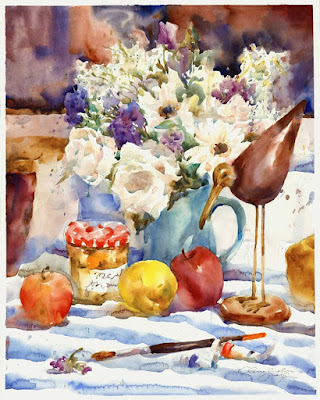 Ewa paints lots of female nudes but this one shows the influence of Charles Reid - as does her figure painting.. 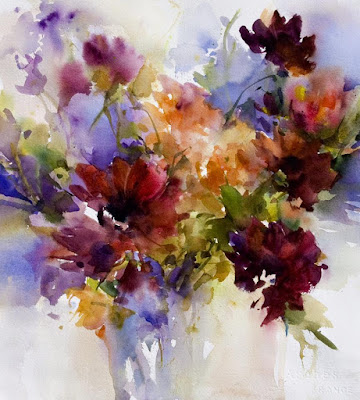 More usually known for her portraits 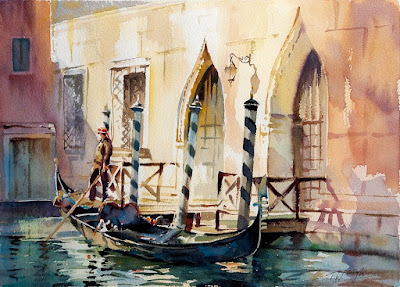 I studied with Trevor some years ago. He has a thing about Venice, so have many others, and has had exhibitions devoted entirely to paintings of Venice and its festivals. 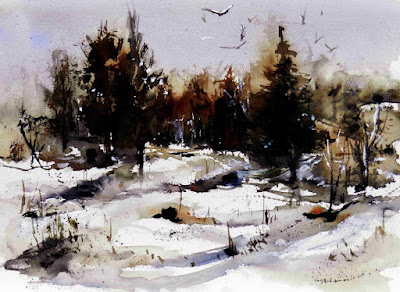 This is a change of emphasis for Gerard but I think it superb and shows his versatility. 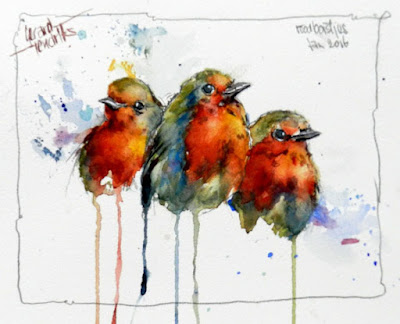 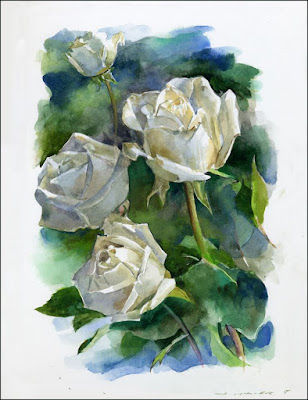 Stan has a wide range with portraits strongly featuring but this flower one is different. 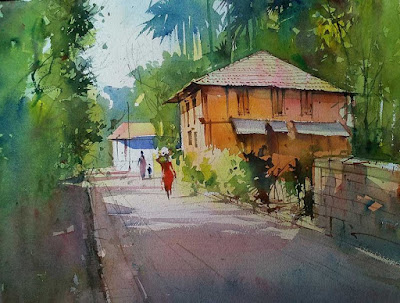 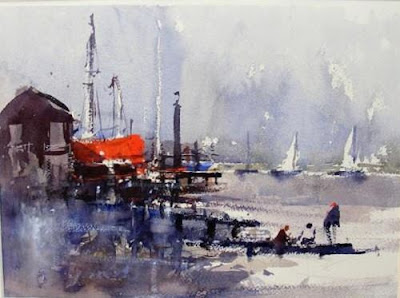 Steven Rigby is new to me but I like his work a lot. 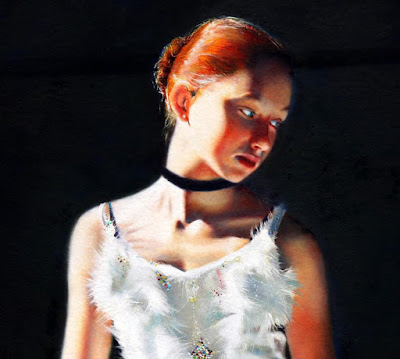