Here is the latest batch for August. They are mainly of well-known artists, many internationally known,  and considered amongst the best watercolour artists past or present. There are many others so this is only a snapshot of the best and reflects  my opinion only. Others may disagree and say why is this one or that one not included? There are so many! I think the selection of artists, in the many hundreds of paintings I've featured on the blog, is my answer with many more to come. 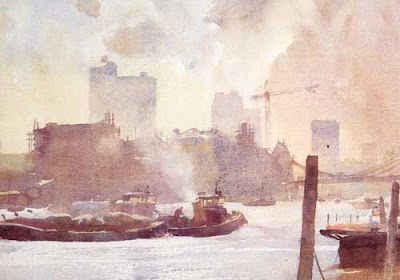 
One of the top two British watercolour artists in my opinion, although originally an oil painter. 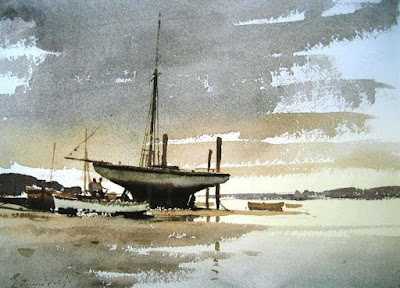 One of the most famous British artists although he produced more oils than watercolours. A friend of the Royal family who was shunned by the art establishment, riven by snobbery and the class system. 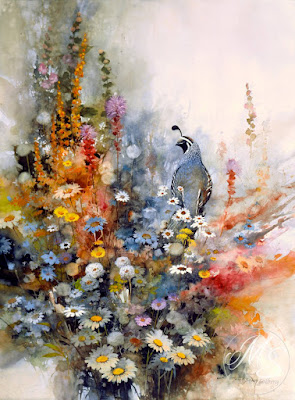 A fabulous American artist. You can see him demonstrating on Youtube. 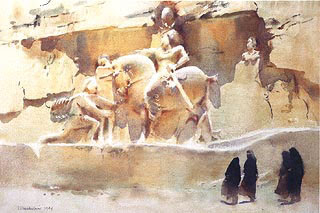 
Another from Trevor. One of his best in my opinion. This appeared in his book 'Trevor Chamberlain - A Personal View' not an instruction type book but very good. 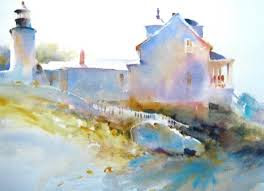 
This American artist featured in the book by the late Ron Ranson about the famous (and controversial) American teacher Edgar Whitney. 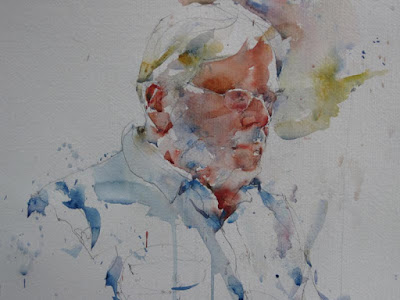 
Another famous American - my guru or one of them. I actually was present when he did the above demo at Urchfont House a few years ago. He was on top form that week and this painting caught the subject perfectly. 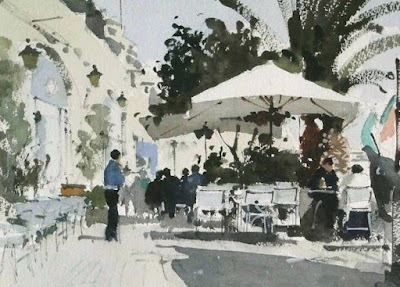 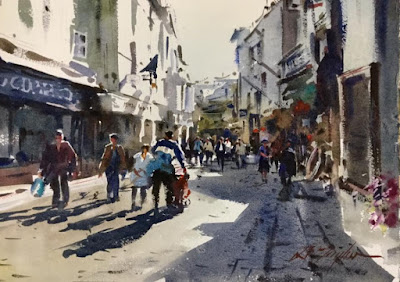 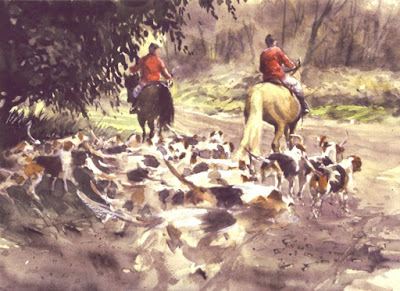 
Robert, a charming man, lost his wife recently and is now quite elderly. This is a painting he did some time back. 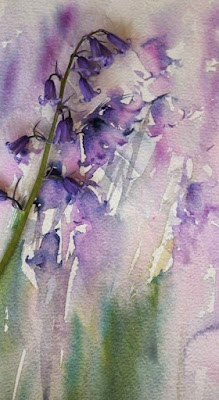 
A very popular artist with a large following. Not one of my favourites though. In my opinion many of her paintings are too minimalistic. 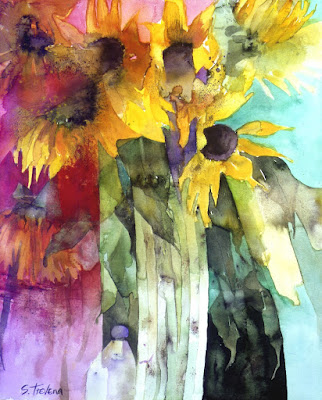 
A fabulous British artist who has written at least two books and produced a DVD(s). A big favourite of some of the lady artists in my Avon Valley group. 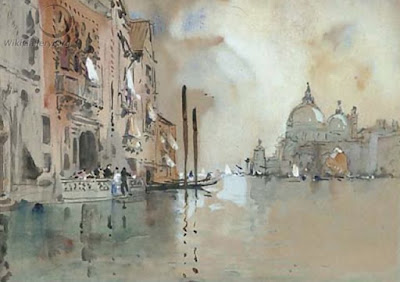 
A famous artist from the older era. When I mentioned him to Charles Reid he claimed not to have heard of him. Perhaps he was having me on as Charles regularly mentions artists from Brabazons era. It is said he produced some of his best paintings in thirty minutes. 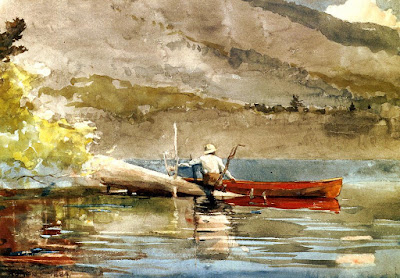 
A legendary American in the same category as John Singer Sergeant 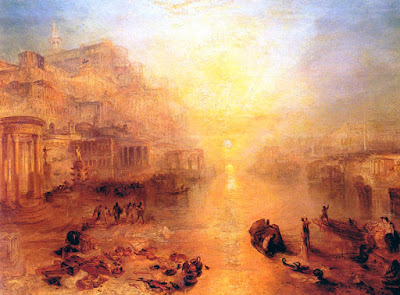 
Turner is venerated by many but Charles Reid isn't a particular fan and neither am I. An I a charlatan? I saw one of his paintings, a small one, at a travelling exhibition some years ago at the Victoria Art Gallery in Bath. Each painting in the exhibition, of many well-known artists, had a foolscap sheet next to it telling about the painting. In Turners case a man described watching him paint. "Attacking the paper, scratching and bewildering the onlooker and then said 'out of this fury a lovely painting finally emerged.' 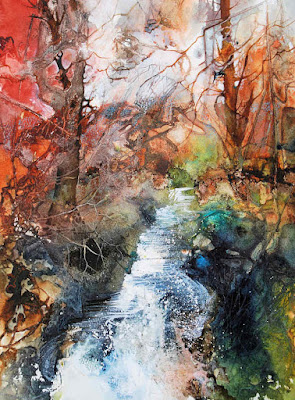 
Daughter of the famous late John Blockley and a leading British watercolour artist. She has books and videos out so if you are interested.


A very prolific artist and utterly charming man. I love his work especialy his birds and animals. I really like this one though. Great video. Keeps nothing back. 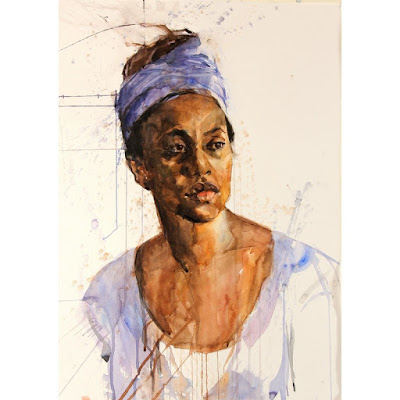 
I think she's Scottish and  a terrific artist. Features on Youtube. 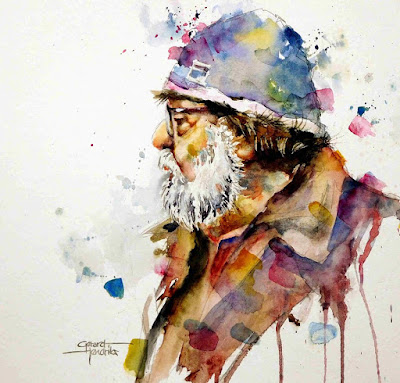 
This is great as well. Look how he uses colour. 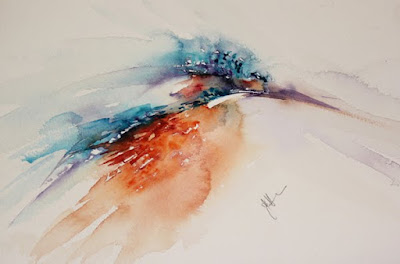 
I prefer this to the previous one featured but it is still lacking (in my opinion) a bit more substance. Shirley Trevena and Ann Blockley are much better (in my opinion). 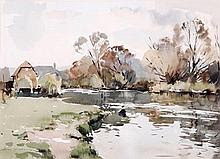 
A famous and very popular British artist. Not as good as Seago in my opinion but his colouful personality went down very well with his students, and many others it seems. . The Alexander Gallery published a book about him called 'Edward Wesson - Honesty in Art'. Quite what that meant I'm not sure, The artist Steve Hall keeps the Wesson legend alive with his books and art workshops 'Painting in the style of Edward Wesson'.

Here are my latest Amerindian studies. Mostly on Waterford High White, all 16" x 12". Two other failures I've not posted but I'm reasonably happy with the ones below, although I prefer the female ones. 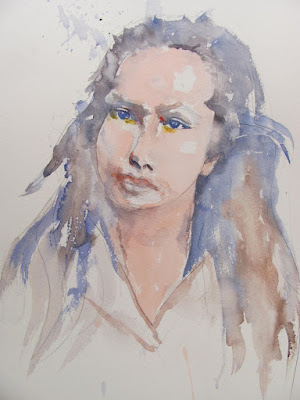 
American Indians are not one homogenous type. They vary enormously both in physical characteristics - from quite tall to short - and skin colour, some very dark, others much lighter. This is a particularly attractive young lady, at least in white terms. I've no idea what tribe she belongs to. The painting above has been modified from the original posted on Facebook. The left facing eye wasn't right and I also softened a few hard lines. This is a definite improvement. 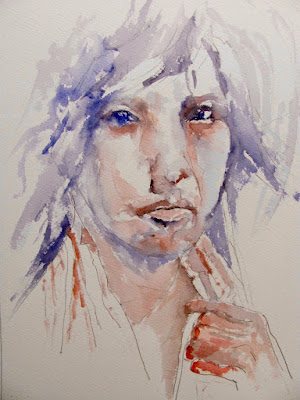 
I quite like this one. Posted on my Portrait Facebook page it hasn't attracted much in the way of likes but this happens to me all the time, while others sometimes get hundreds. My fate to be unrecognised - just a joke! 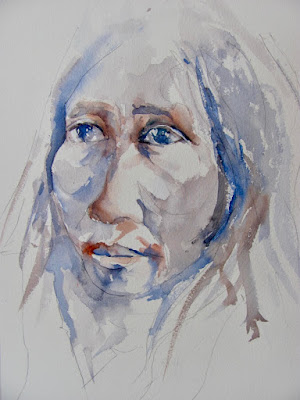 
This one and that immediately above was about  not spending much time on the hair, which both subjects had in abundance, in an attempt to vary the way I tackle the subject. I used the guide photos as just that - guides - and tried to capture certain characteristics, mainly the eyes but in a less formal way. You can get bogged down with  hair and Charles Reid always says don't! 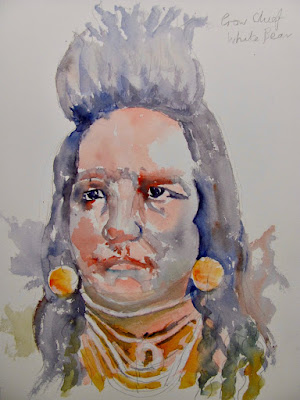 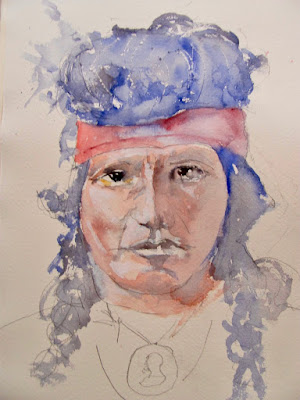 
This one and that above are notable for the topknots. The Santee Sioux example is unfinished and I don'y know whether I'll do any more with it The Santee Sioux lived in Minnesota. The pressure of white settlement caused them to rise up in 1863 and attempt to exterminate the white population. Many hundreds of mainly settler men,  women and children were killed in the most brutal way, but eventually they were defeated and the perceived ringleaders hanged, although some sentences were commuted. As usual there are different views on the rights and wrongs of what happened. The main chief Little Crow was later killed with his son when gathering berries in a forest where they were hiding.  The remnants were driven from Minnesota. One notorious minor chief
called Inkpaduta, notorious for the so-called Spirit Lake massacre, travelled hundreds of miles with his small following and gained refuge with the plains Sioux. Reputedly he was at the Little Big Horn in 1876 when Custer and his command were wiped out.

Painting these subjects I mainly used my small Craig Young painting box with Cadmium Red, Raw Sienna, Cerulean and Ultramarine Blue, in different combinations, the principal colours. Brushes are my Isabey No 6 Travel Brush and Isabey Sables 4,6 and 8. Also started introducing the Escoda Kolinsky sable Size 14 principally for the hair. My Guru Charles Reid always says don't spend too much time on the hair. As for paper  my choice is the Waterford High White blocks. As a block they hold together much better than say Fabriano. You may notice I used Moldau on the Santee Sioux. I purchased 40 sheets at great expense and effort a while back and thought I needed to use them. They are only 130lb and supposedly A3 but are slightly smaller especially in width. They do buckle noticeably. I have stretched in the past but am reluctant to do it again. I have quite a lot of paper accumulated over the years in sheets. Various types with Waterford original in the majority but quite a few other makes. I now much prefer the Waterford blocks but will have to use this other stuff as well.

Here are my latest efforts, although since I've done several more, some of which I'll post soon. Actually I've had them hanging around for a little while so thought, for want of something better, to post them. The first subject is "Blue Thunder' subtitled 'Custers Scout',. I'd never heard of this guy until recently when I came across the photo from which the painting was produced. This was taken around 1900  when he was fairly elderly. According to what I could find he was a Santee Sioux and was a scout initially in the 1860s at the time of the so- called Fetterman massacre at Fort Phil Kearney. He wasn't with Custer at the Little Big Horn which was lucky for him.
. 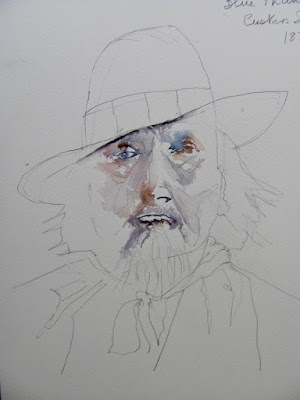 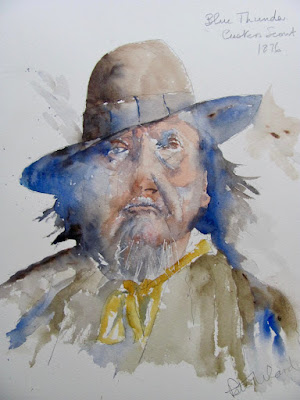 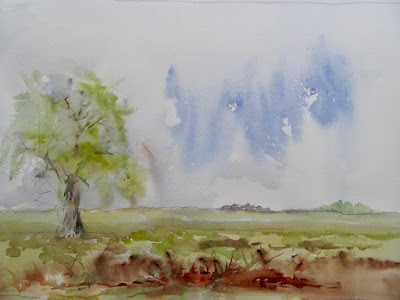 A simple Landscape _ an AVA subject at a Thursday session. 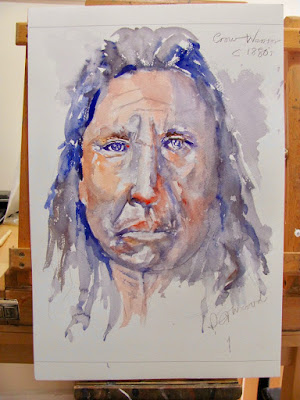 The recent upgrade from Schmincke introduced 35 new colours. I have briefly covered them elsewhere but decided to try a couple.They are  currently £9.00 for 15ml tubes from Jacksons, In addition I recently bought Warm Sepia from Daler Rowney. Why this one? Both  John Blockley and John Yardley have mentioned Warm Sepia so I have assumed this is the Daler Rowney paint as nobody else, as far as I know, use this name. 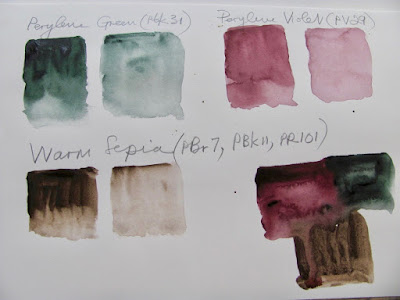 The swatches on the left are Perylene Green, those on the right Violet with the Warm Sepia bottom right. None of these colours painted out that well but I think the paper is at fault, just an old piece of unknown provenance, so don't damn them on the basis of the above.

For a brief description from the Art of Pigment database see the post on Schminckes new paints in April.

Perylene Green is a very dark blackish green - almost black in masstone so could be good for backgrounds. Rather dull  so I'm not sure where this might fit in.

Perylene Violet (PV29) is a new pigment and when I gave Yvonne from my painting group both to try, she initially though it very like some Burnt Siennas.When diluted it does show a violet shade and in this form might be good for portraits. These are only initial thoughts others may differ. Yvonne thought the Green more interesting.

Are they worth adding to ones palette? That, as always, is a personal decision but I have my doubts in the case of the Violet. The green perhaps needs playing around with.

As for 'Warm Sepia', another dull colour, I'm not so sure. A three pigment mix?