This modest little book,  approximately 51/2 x 8" - 91 pages, was brought to my attention by the late Charles Reid. I can't remember the exact circumstances not that this matters. Hawthorne was an acclaimed art teacher who died in 1930. The book is from students notes collected by Mrs. Charles W. Hawthorne originally published in 1938, and republished in a Dover edition in 1960. 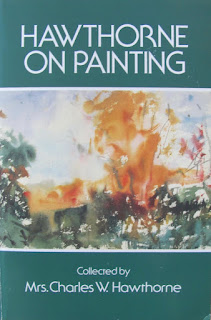 This is isn't a 'how to' book more a philosophical and general discussion, although including how to  consider all aspects of painting. Some subjects are covered briefly and  how you should approach them.  Watercolour actually only has 8 pages. Charles Reid has related many times how he came to paint in watercolour. He was a teacher at Famous Artists School and taught oil painting. One day he was asked to do something in watercolour which they were deficient in as far as teaching was concerned.  He had no real direction or advice on how to proceed so adapted his oil painting methods to watercolour. He always said much of what he taught was unusual and against the orthodoxy with regard to watercolour, and I've no doubt he consulted Hawthorns book.

A few of the things Hawthorn said:

"A good watercolor is a happy accident - if you qualify the statement by saying the greater the artist , the oftener the accident happens"

"Do them as you do oils.  that is try to get contrasts. Don't be afraid of the medium - put down what you see as spots of colour rather than as form.

"use cheap colors, if you will, but buy good paper - fifty per cent and more of your watercolors depends on the paper you use. Work very wet and don't be afraid of the colors running into each other "

"Don't make them too precious - don't bother about the object but make spots of color against each other in relation. Color makes the form - Manet did it with spots of color, spots of color together telling as one."

They are just examples but you can get the general drift. He certainly wasn't a fan of super realism.

Having done several workshops with CR together with his books and DVDs I can see how he was influenced by Hawthorn.

Should you be interested in following this up Amazon have the Kindle edition at £5.69 and the paperback at £5.99. I'm sure some other booksellers could obtain copies.

Email ThisBlogThis!Share to TwitterShare to FacebookShare to Pinterest
Labels: Hawthorne on Painting

More (of my ) Paintings

This is this weeks batch. In general I'm (with reservations) quite pleased with them. 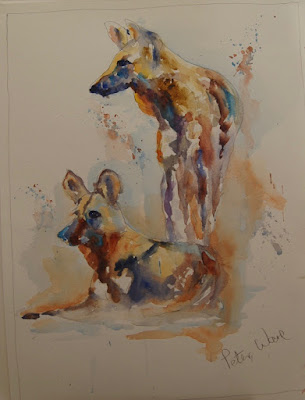 Wild Dogs - 16" x 12" Actually I did this last week. I've been unhappy with the reproductions taken with my point and shoot Canon so have tried some with my Nikon SLR with 55mm Nikon lens. The colour seems better. 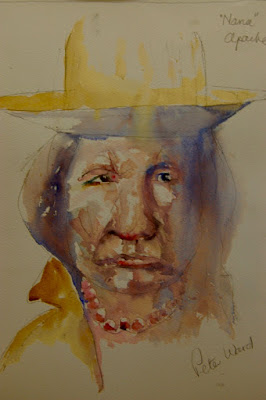 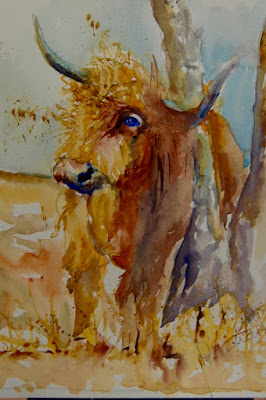 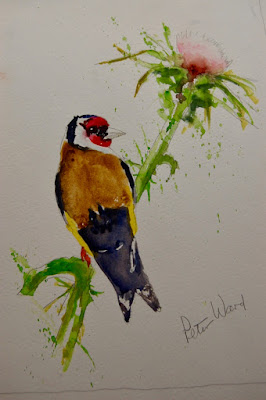 Email ThisBlogThis!Share to TwitterShare to FacebookShare to Pinterest
Labels: my paintings

I still keep plugging away, furiously in some weeks. Is this my last chance saloon? Hope not. After 20 years I feel I've made some progress but not nearly enough. Great hobby though and have many painting friends here and around the World. 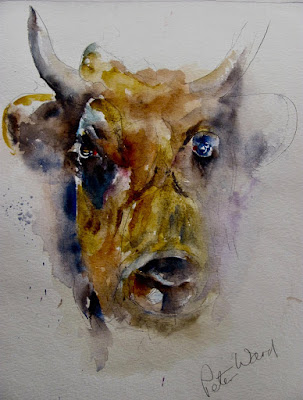 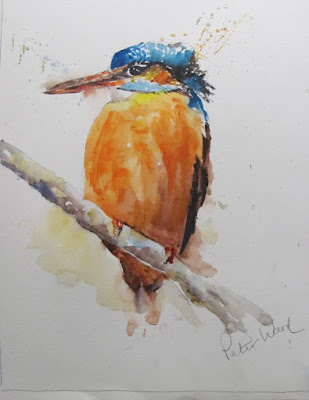 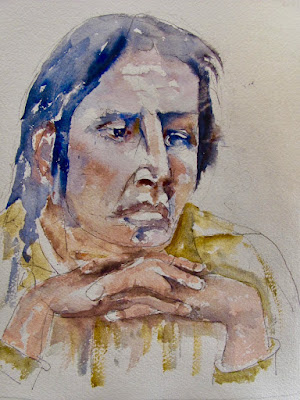 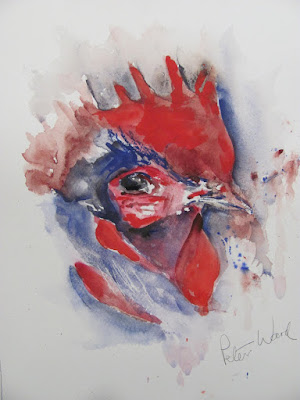 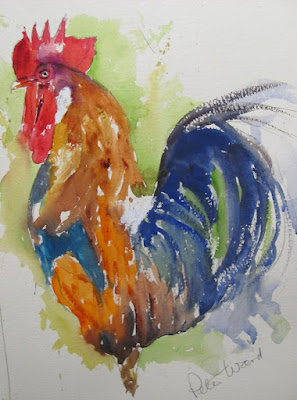 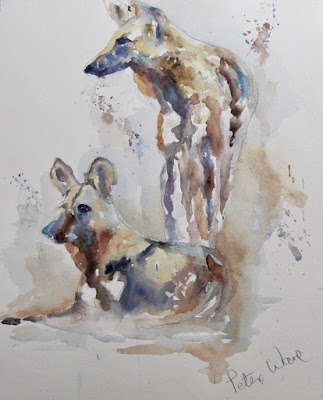 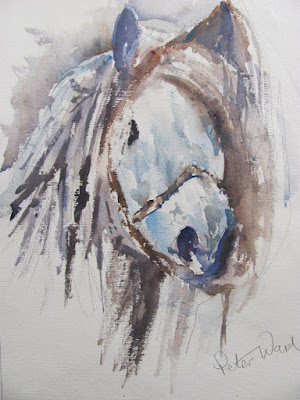 
These latter two were completed today, although I may 'tweak' them a bit. Not so much colour as the ones above but  the colours of these animals were generally more sombre.
Posted by Peter Ward at 06:33 4 comments:

Email ThisBlogThis!Share to TwitterShare to FacebookShare to Pinterest
Labels: My latest paintings

In my recent piece on the new expanded Van Gogh range I speculated as to whether Rembrandt would receive similar treatment.  I  received a comment saying this was so and on looking at the Royal Talens site sure enough the following colour chart was there together with a brochure giving full details. Make no mistake the changes to van Gogh and Rembrandt are major moves and raises the profile of the company to a level comparable to Winsor & Newton, Schmincke and puts them ahead of some others. Rembrandt have always had a good name, despite Handprint labelling them a 'second tier' brand, but no longer does that apply. Even so the old range has been used by such artists as Gerard Hendriks so 'second tier' is a misnomer. 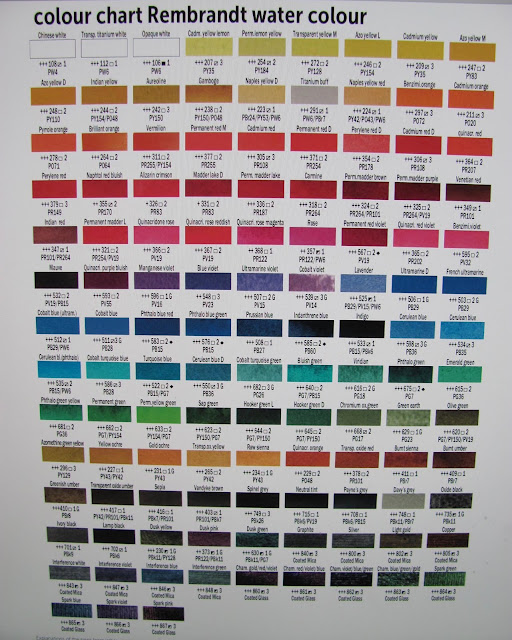 There are now 120 colours up from 80. That in itself is a big leap. 67 are single pigment paints out of the 104 'standard' colours. The remaining 16 colours are either Coated Mica (8) or Coated Glass (8). Not being a techno I don't know what that means although I've no doubt a little exploration would find the answers.

Only two colours - both PR83 - are given a single star for lightfastness with five two and all the rest three. For an explanation see above. The range of pigments now  mirrors the majors whereas the old range had a limited number and had quite a few mixed paints. PY129 now features called Azomethine Green usually known as Green-Gold. Green Umber is Pbr8. Spinal Grey is PBk26.  There are three Dusk colours, `Yellow, Pink and Green. Aureoline is PY150. And so on. If you are interested there is something called 'Color Spotlight' on Youtube that analyses individual pigments with much interesting information.

As far as I can tell - and this is provisional - there will be three price bands as now with halfpans, 5 ml tubes and a limited number of colours in 20ml tubes. I'm not certain of this and will now explain why.

I e mailed Royal Talens (twice) asking them about availability and prices.  This was two weeks ago and I've not had a reply. I then contacted Jacksons sales who knew nothing about this new range. Jacksons have never majored on Rembrandt (and don't sell van Gogh) but do stock them. Further enquiries to Jacksons brought the response that the buying department had said it might be a considerable time before they had them and to watch out for new product announcements! We await developments.
See comments below that give more information.
Posted by Peter Ward at 04:22 4 comments: