In 2012 the popular pigment PY153 Nickel Dioxine Yellow was discontinued, no doubt because of lack of demand from the chemical and/or auto industries. As has been pointed out previously makers of watercolour or other types of paint are very much at the bottom of the pile and have to take whatever is available. Although not offered by a huge number of paint makers PY153 was the pigment used by both Winsor & Newton and Daniel Smith for the popular New Gamboge paints. Both have already reformulated with a multi pigment mix. In addition Rowney and one or two others called it `Indian Yellow, supposedly a replacement for the notorious original Indian Yellow. Why notorious? It has been said, and repeated many time, that this paint was made in a vile process by feeding cows in India with certain types of leaves, that turned their urine yellow, and this was the foundation of the paint. Although this story has been repeated many times I, in my capacity as a (very) amateur historian, researched the story and discovered that it might all be nonsense with no real basis in fact.

The Rowney Indian Yellow is a staple in my palette so I have to decide at some stage on a replacement. I still have a full tube so this isn't urgent. Handprint claims several orange-yellow and yellow-orange paints make adequate replacements but basically plumps for three, PY35, PY65 and PY110. Before I continue you will find that several paint suppliers still list PY153 and may continue to do so. Can you trust the labelling? Possibly but I have my doubts and in fairness one can't expect a manufacturer to immediately change the labelling for just a single paint. I notice that Winsor & Newtons new style bare metal tubes appear to have the information printed on them so that may mean they can change details quite rapidly.  Winsor & Newton have also said that their usage of pigments is so large that, when a pigment is discontinued, they run out quite rapidly. 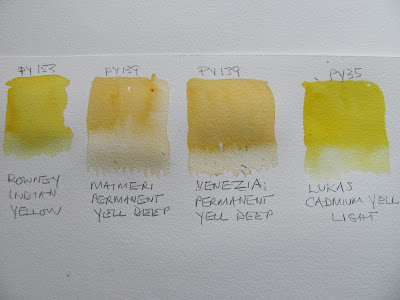 The left swatch is Indian Yellow from Rowney. The two middle swatches are Permanent Yellow Deep (PY139) from Maimeri and Venezia respectively, while the right  one is Cadmium Yellow Light ((PY35) from Lukas. The closest appears to be the Lukas paint but, being a Cadmium, is opaque and also toxic. The two Maimeri paints appear more orange. Neither PY65 or PY110 are (as yet) widely available but PY65 is listed by W & N  as Winsor Yellow Deep, also by DaVinci as Hansa Yellow Deep and Arylide Yellow Deep. Daniel Smith call it Hansa Yellow Deep. So far PY110, which is highly praised by Handprint, is only on offer from Daniel Smith and Graham - Permanent Yellow Deep - Indian Yellow  respectively. This may change  in the medium to long term.. Daniel Smith call PY108 Indian Yellow.

What to do? I don't have to change immediately so will ponder the problem for a while. My inclination is to try PY110 maybe from Daniel Smith. Any corrections or additions to the above are welcome and can be incorporated in the text.

Thanks for comments Jane. On that basis it seems paints with PY65 may be the best alternative. I have colour swatch charts for most of the makers so will have to compare them.

Peter,
I was caught out when W&N changed the formula for Quin Gold (PO 49) but it's still available from Daniel Smith for the foreseeable future - albeit more pennies!
This time I moved quicker as New Gamboge (PY153) is my staple warm yellow. I bought 2 of the 4 remaining 37 mil tubes from Jackson's a couple of Schmincke Indian Yellow (PY153) and a couple of Jackson'(alias Schmincke) Indian Yellow (PY153) so for the present I can forget about a substitute.

Hi John. Yes you told me previously you'd stocked up(!) I don't use a huge amount so the full tube I have should last a little while as I look at alternatives.

PY65 will become more widely available as time goes by, because it is actually the bright yellow / orange that is seen on the road. It is a ridiculously high chroma, the highest of almost any pigment availalbe, it has excellent lightfastness and together with PY3, it removes the need to use a middle yellow.

Bismuth yellow isn't a good replacement for the cadmiums since it's just as toxic.

I was so glad to see your post. I just opened a tube of Winsor-Newton New Gamboge that I purchased last June. It has the old label that says it is PY 153. But it's not! What a shock, as I am in the middle of a painting. I looked on the W-N website, and it says the "new" New Gamboge is PY150 and PR209. Geez, it looks more like green gold or something. Not nearly as saturated or as orangey.

You suggest PY65. This is what Winsor-Newton's Winsor Yellow Deep is. I don't have it; have you tried it? I'd be curious how it compares.

Thanks very much for initiating this discussion.

Thanks for comments Jane. I don't have any experience with PY65 but others have recommended it as a replacement for PY153. I still have stocks of Daler Rowney Indian Yellow which is PY153.There doesn't seem to be any consensus about a replacement for PY153. What we do know is that it needs to be an orange-yellow paint. As for label details I'm afraid I suspect an increasing number - not a huge number as yet - of paints have different formulas to that shown on the label. Possibly this is why W & N are now printing details on the new tube design.

This is the first time I see the end of PY153 stocks for painters mentioned. A year and a half ago I happened to notice that this would happen at some point. So the first thing I did was buy a 37 ml tube from W&N new gamboge watercolor. I'm so glad I did! The same thing happened with Lukas manganese blue (Pb33) which has a unique granular character which I love very much. I found a shop in Switzerland that sent me the last three whole pans they had left. Only Old Holland now sells this pigment, but it's quite expensive while the Lukas paint is cheap and at least as good (in this pgiment that is). The moral is: buy your favorite paint in stock while you can. Hopefully by the time you run out the industry will have a good replacement.
It took me a long time to find a good Indian yellow watercolor. W&N New Gamboge is less orange than I wanted it, but after a while I got used to it and adapted my way of working. It's always a bit of a shock for us artists when our favorite materials run out, but aren't we artists and don't we have the flexibility to adapt and find new ways do our creative work? Personally I think we are in heaven considering the choice in todays pigments. It's also wonderful that we inform each other of our experiences with this wealth of materials.
Getting back to PY153, I think hadnprint says that PY110 is almost the same. Makes you wonder why W&N don;t use that pigment as a replacement for PY153. I agree with Jane Blundell that PY150 in the new formulation of new gamboge is a rather brownish yellow, yet it has unique mixing properties. I know that Rembrandt uses PY150 for making their gamboge and Indian yellow. On my palet I have both PY150 and PY153 (for as long as my tube lasts) and with these two and a red or orange I now mix my own versions of the Indian yellow hue I want. It's a bit more work, but this way I learn to know my pigments. I am confident I will find new solutions in case I run out of PY150.
Happy painting to you all!

Sennelier still lists its Sennelier Yellow Light as being PY153.

I also use Sennelier Yellow Light as my light yellow but in reality it is PY154. I still have 3 tubes of Daniel Smith new gamboge with PY153, I've tried to buy more to stock up but the new tubes came with the new formula: PY97+PY110. The hue is identical. I have both side by side in a palette and, once dried on the pans, the PY153 formula seems just a bit darker. Maybe all of my tubes marked as containing PY153 are also made with the new formula. I bought them at Jacksons in 2014. I think I will buy a couple of Daler Rowney tubes too.

Thanks for comments Hugo Dolores.

I'm new to watercolour, and i wonder, why do you need a 'warm yellow'? Is it just to make realistic muted greens? Because i can use a middle yellow to get the same result (IS IT?) ?

Thank you for your clear answer mrs Fritz. I just replace my middle yellow aureoline modern with translucent yellow py151.

Mainly because it is closer to new gamboge, a colour recommended by John Pike in his book: Transparent watercolor. I want to follow him closely in that sense.

But he uses thalos: blue n green: I use viridian instead, as my homebase green.

Back to new gamboge. Could this colour be the only yellow in a restricted palette?

Hope to hear from you guys soon.

Abdul - most palettes would include at least two yellows. Perhaps a lemon yellow and a middle yellow, inclining to orange. I suggest however you Google 'Handprint Palettes' where you will find a complete discussion about the composition of palettes and why. It starts with the 'split palette' and expands on this.

Guerra Paints lists PY153, Dioxine, in their pigment dispersions list. Those who really want PY153 can get it from them and make their own.

I had noticed many changes in the formulation of Daniel Smith's paints, mostly from one pigment paints to two or even four or more. Does not make sense really. I much prefer using one pigment paints so I keep the painting transparent and at high chroma. I have been using PY 110 found in Daniel Smith and M. Graham, the latter being now my favorite supplier. Paints made with honey stay moist in the palette and MG's paint are highly pigmented. Between PY 150 (nickel Azo Yellow) which is a two tint paint and PY 110 and some more green yellows I manage very well. I recommend PY 110. As to Quina Gold, watch for the labels as they all should say Quina Gold tint. When I learned the pigment was being 'terminated' I bought 10 tubes from DS and I am glad I did. This pigment together with PY 150 is the most transparent of yellows and also with two tints and good tinting strength and fabulous for color mixing. The new formula come close in color but not in transparency. It is wonderful to be able to share our knowledge like this. Thank you.

According to the pigment database it states " this pigment was discontinued in 2012?.But some manufacturers still list it." quote.

I have been very lucky to come across some old schmincke pigment stock in my country so i have stocked up on PY153. Let me know if you're interested! @stakiwicolours on instagram