As we have already discovered there are several variations of Ultramarine Blue, each pigment batch defined by a five figure number. I think this applies to many other colours,  PV19 Quinacridone Rose /Red/Violet being examples.

Ultramarine Blue is the modern synthetic replacement for the original natural Lapis Lazuli.  The pigment database www.artiscreation.com. describes it thus `...either the pigment extracted from Lapis Lazuli or the synthetic form Poly sulfide of sodium potassium, lithium or silver alumino-silicate' I hope I've got that all right! We then go to colour shade which is described as: `Deep blue, violet to bright bluish green shades, usually slightly duller in natural forms...' Lapis Lazuli can still be obtained from a very small number of sources and there are purists who will hunt such out but it is exceedingly expensive, while the synthetic Ultramarine is usually in the lowest price range.. 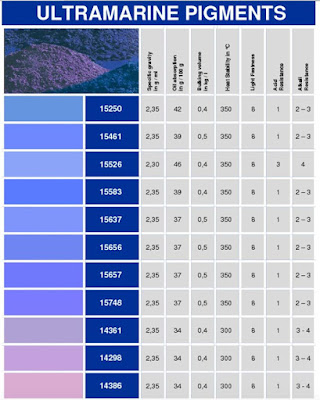 It has been suggested that a possible alternative to Ultramarine Blue is Indanthrene or Indanthrone Blue which is PB60. This is one of the darkest value paints but on the dull side. I mainly use Ultramarine Blue to produce darks (or even greys) coupled with Burnt Sienna, Burnt Umber or Translucent Brown (Schmincke Pbr41)) , this latter colour resembling a brighter Burnt Sienna. There are other alternatives like some of the reds which will make very strong darks. Plenty to choose from!

Not much more to say really with personal preference playing it's usual part in determining what you buy.
Posted by Peter Ward at 07:20 7 comments:

This is my latest Indian portrait, a Comanche Indian with the name of Left Hand. I haven't been able to find anything else about him. The guide photo is from the Edward Curtis collection, freely accessible on the web. The First People site is a good place to start. 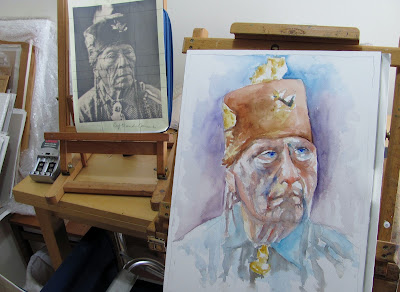 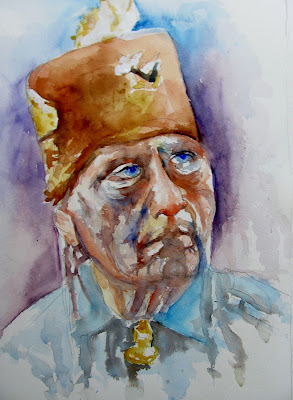 I feel I've been slipping away recently so went back to basics, studying Charles Reid but also one or two other portrait artists like Aime Devine. This is the result. The original photo is black and white or more correctly more sepia-like. Colours therefore are guesswork even the facial ones.

I recently tried out Cornwall watercolour paper from the well-known German manufacturer Hahnehmuhle. They have quite a range and Gerard Hendriks uses their Andalucia 500gsm paper - so does Viktoria Prischedko.. The interesting thing about Cornwall is that is  a slightly heavier paper at 210lb rather than the more common 140lb.Yvonne Harry the leader of my AVA group and a very fine artist, quite the equal of many professionals, had purchased some and used it at our AVA sessions. I was quite impressed with the results so decided I would give it a try. It isn't a cotton-based paper, presumably cellulose or similar and being slightly heavier than the norm doesn't buckle quite so easily. Because the weight is heavier the cost is roughly equivalent to a 140lb cotton paper so you don't save in that respect. 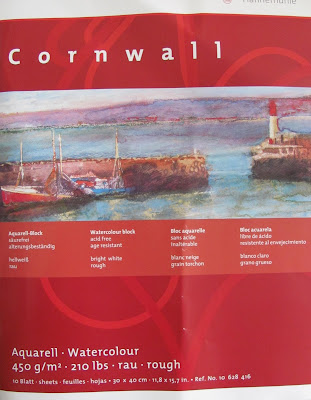 Cornwall comes in both rough and matt surfaces, the rough being quite pronounced with a distinct pattern. Both come in blocks of ten in various sizes and you can also buy sheets. I bought blocks of both surfaces in the 30 x 40cm size, my favoured size. Current Jacksons price for the 10 sheet 30 x 40cm block is £12.20p.

I recently tried the rough surface at an AVA session. The subject was landscapes, which I don't do very often these days so I was very rusty. getting my excuses in first. The surface of the paper is quite rough with  pronounced vertical lines. Brushing across them produces a broken effect. I initially tried a portrait subject and it was a disaster. It just didn't suit the subject at all. Whether the matt surface would be okay I've yet to find out. 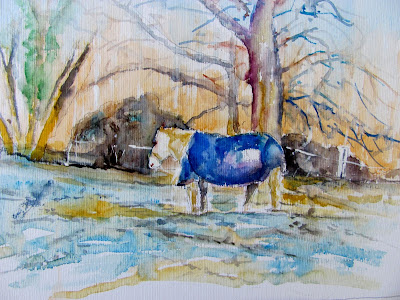 A few years back I tried another Hahnemuhle paper Britannnia available in rough and matt surfaces. For a while I quite liked it. It has a hard surface so the paint doesn't sink into the paper and remains bright. Being 140lb it is cheaper than Cornwall and the 12 sheet 30 x 40cm is only £9.40p. A good budget option. My favourite papers these days are Fabriano Artistico Extra White and Waterford High White. I'm inclining more to the Waterford and  prefer the 16" x 12" size rather than the 18" x 12" of Fabriano. The Waterford High White took a little time to get used to as it is different from the normal off white,but is a lovely paper used by many top artists. Unfortunately being cotton it is more expensive but there are occasional special offers. I should mention I also use the Great Art Centenaire paper, another of 100% cotton and it is good but not quite as good as the Waterford (my feeling), although a little cheaper.

Here are the latest watercolour paintings I've downloaded. A varied selection with many different styles and approaches. Hope you like them at least some of them! 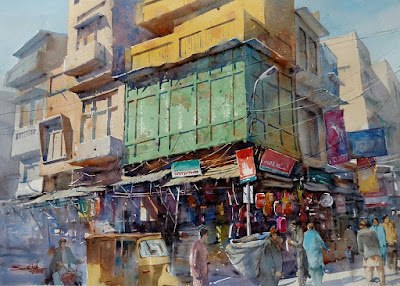 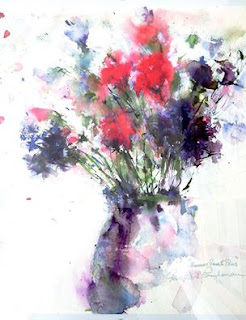 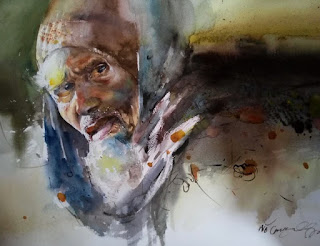 Another from N B Gurung 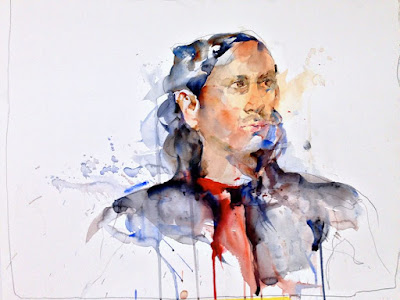 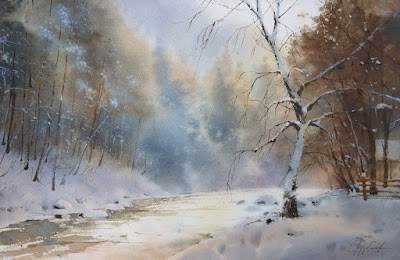 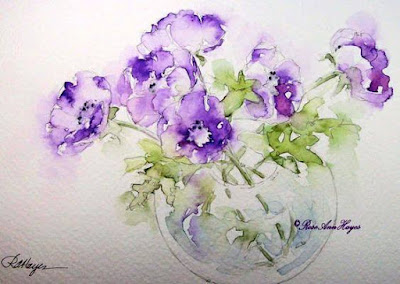 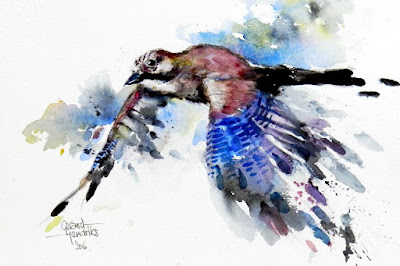 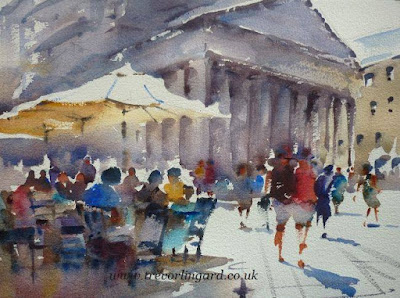 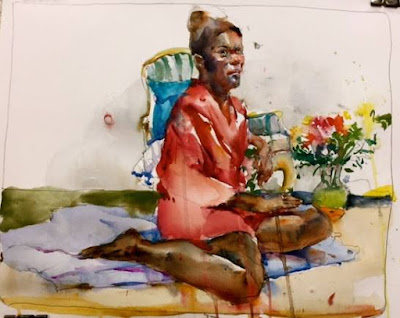 Another from Charles Reid 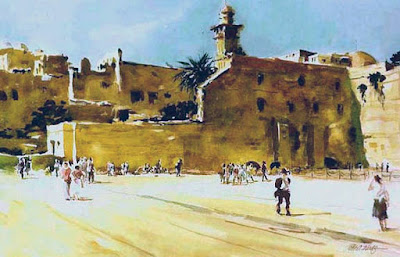 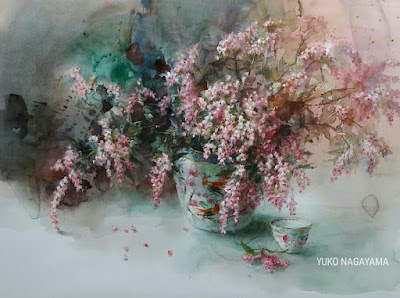 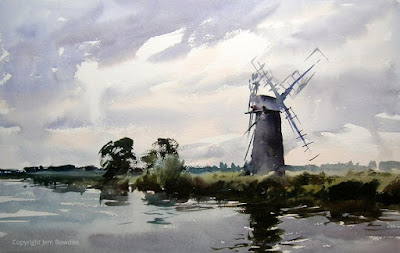 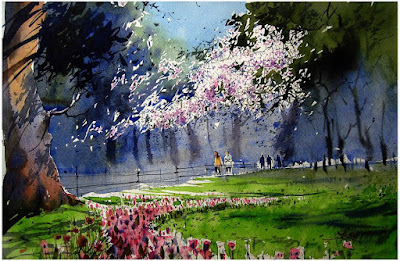 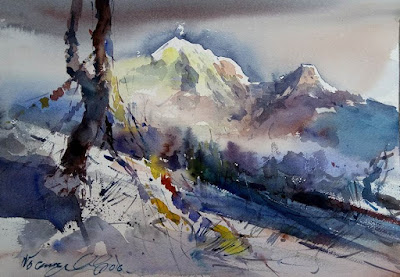 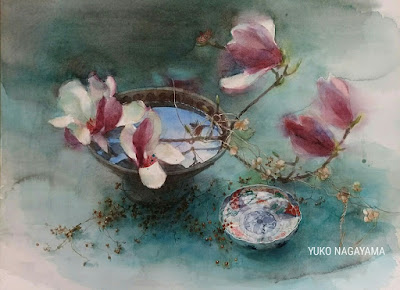 Another from Yuko Nagayama 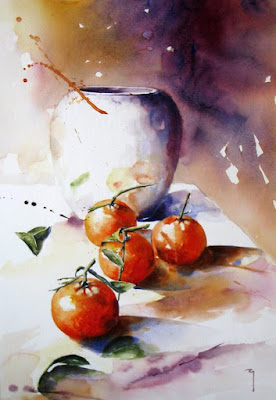 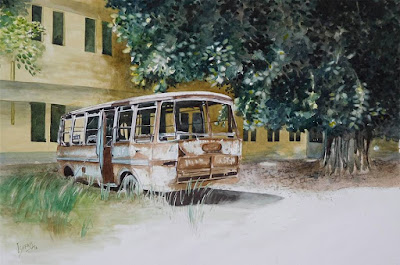 Another very varied selection from well-known and lesser known artists. I include some of my favourite artists as well.  Some wonderful paintings amongst this batch with hopefully something for everybody.