I have written extensively of my experiences of workshops with Charles Reid. Sadly I've reached an age - six months younger than Charles - where his loss, and that of other painting friends like the larger than life Mick Carney, who I met on a CR workshop, is becoming increasingly common. 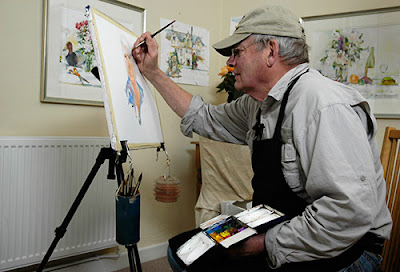 I had I think reached the end of my Charles Reid experience with my last workshop at Stow, as far as workshops went although he only made one more trip to the UK with the travel arm of International Artist magazine. I looked at the prospectus but it wasn' t appealing and was obviously designed for artists outside the UK as you were initially picked up at Heathrow airport and moved around to different places. It was much more expensive than the workshops which in themselves were not cheap. I remain a disciple and frequently refer to my extensive collection of his books and videos. I always  preferred his portraits , figure paintings and still life's/flower arrangements, amongst his wide range of subject matter. With his death the value and prices of his paintings have increased as is usual with top artists.

Much of the following has appeared in previous writings but I thought a distillation might be of interest to those who have recently become interested in his work and various techniques. Charles often said much of what he taught was against the prevailing orthodoxy of watercolour and there were those who did not like the way he painted. He also said some commented he couldn't  draw a straight line! Fortunately enough were fascinated to earn him a World-Wide reputation. Despite this apparent unorthodox approach basic principles for good paintings were embedded in what he did and said.

Charles approach to watercolour came about almost by accident. He originally painted in oils - and still did - although watercolour made his name. He was working as an instructor for Famous Artists in the USA. Apparently they needed some one to teach watercolour and he was arbitrarily given the job! As he had  previously taught oils - and knowing little about watercolour - he applied his oil painting techniques which as I've previously noted,  were different to the accepted watercolour way. That he was successful in doing so is obvious. If you have his books you will see his first two were colorwise very much monochrome and he soon adopted a more colourful and looser technique. He applied the same approach whatever the subject. A good book to see all his techniques, originally recommended to me by  Craig Young (Painting Flowers in Watercolour- 2001 UK David & Charles, USA North Light Books). In the UK the book and DVDs are available from Teaching Art www.teachingart.com

In addition to his painting Charles also had an unorthodox approach to drawing which he called his 'modified contour' approach.  This involves keeping the pencil on the paper and making dots when changing direction. The book he recommended is 'Keys to Drawing ' by Bert Dodson (North Light Books 1990). I'm sure this is still obtainable. Another book he recommended was "Hawthorne on Painting' (Dover Books 1960) a modest small A5 book which is a compilation of students notes. Only 18 of the 91 pages are devoted to watercolour,   which is not a how to book but a more philosophical approach to painting - and you can see his influence on Charles.

As for materials Holbein tubes were the main choice, although at one stage Winsor & Newton pans appeared in a mixture with the Holbein.  He usually had up to 16 - 20 colours and each year one or two new ones tended to feature. Brushes were DaVinci Maestro rounds with 8 and 10 the most popular sizes. Later he started using some Escoda after being given the Royal treatment on a visit to the factory when in Spain. A three brush set with his name on the handle was introduced. While Escoda are good and he did continue to use some, DaVinci remained his main choice. A well known younger artist - now deceased unfortunately rather prematurely - who was promoting Escoda loudly claimed they were Charles choice, and when I questioned this I was on the receiving end of some nasty vitriol that continued for some time. Enough of that though. Palettes were a selection  from Craig Young including at least one 'special'. Charles choice of paper was Fabriano Artistico but he also liked Schut and Moldau.  Moldau is hand-made in Czeckoslovakia and is very difficult and expensive to obtain. I know I managed to get some. Schut is no longer available under that name but the top of the range 100% cotton paper is now sold under the Fontaine label.

What were the things that Charles stressed in his lessons and became imprinted in my mind.?

Not necessarily in this order here goes:

Try for a finish with the first strokes - as little overpainting as possible. This is a difficult one and very hard for the average artist like me to accomplish. Nevertheless it identifies the worst (in my opinion) fault in many watercolours - overworking. The suggestion was you don't finish a painting but stop when you reach a point where you are wondering what to do next. He also said the actual painting  should take about 1 - 2 hours at most and mainly painted on half sheets.

Another pearl was 'its just a painting so don't get too precious, mistakes are part of it'. Don't keep trying to rescue a failure. Scrap it and start again.

With all paintings you reach a point - about halfway through - where success or failure can happen. That's decision time  - what to do next!

Generally in watercolour artists work from light to dark. In Charles case he would often put the darks in first, again against the orthodoxy. Basically he considered there were no rules. 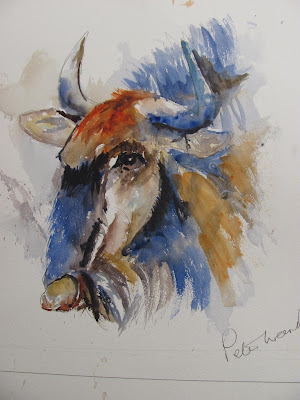 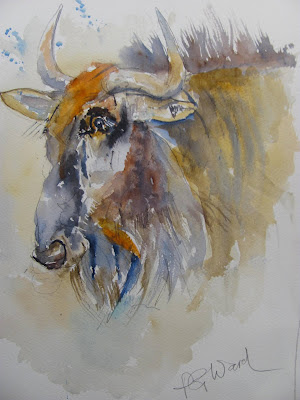 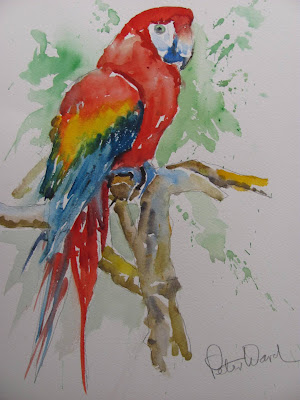 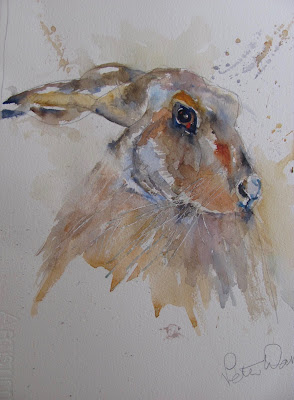 Here are Octobers batch. Another varied mix. A variety of different styles and artists old and new - at least as far as this blog is concerned. 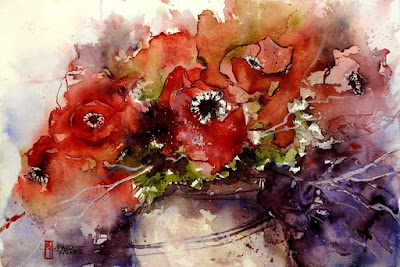 Gerards paintings continue to evolve. He is reaching new levels of excellence. 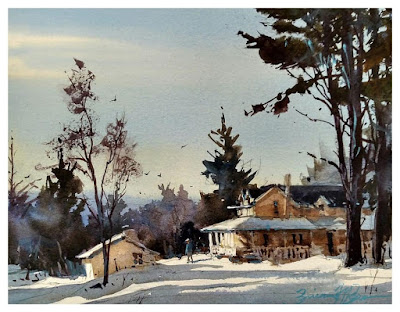 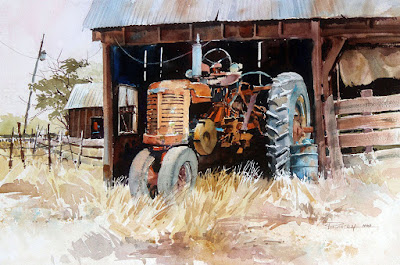 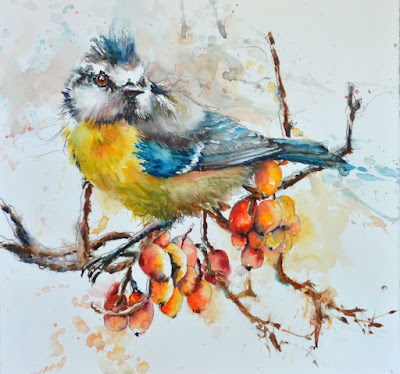 I love this. Just superb. 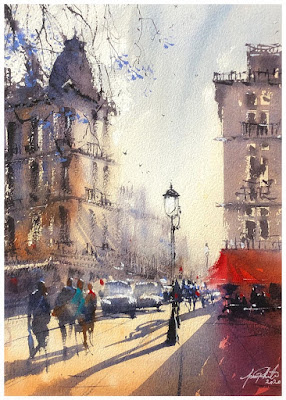 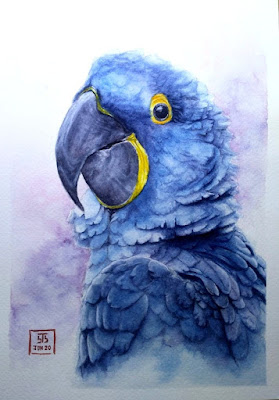 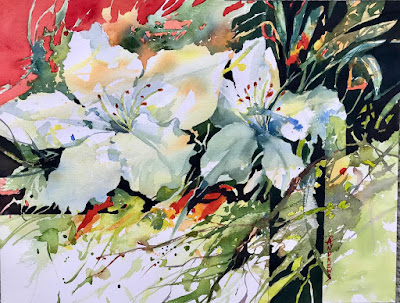 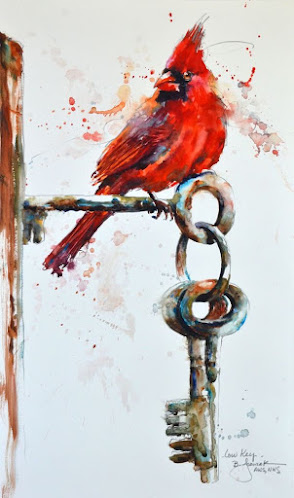 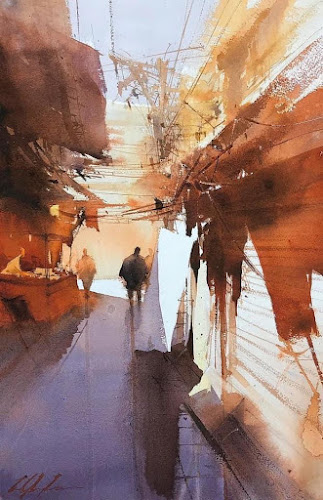 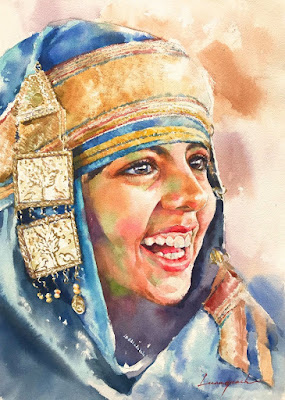 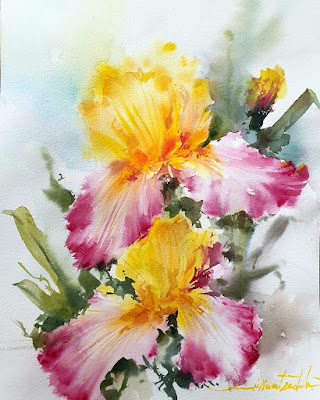 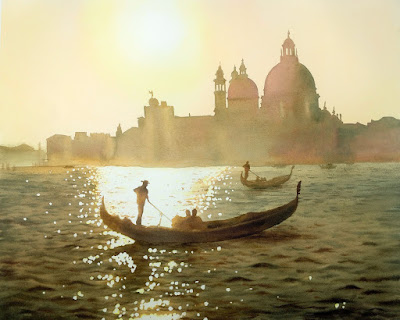 
Venice paintings of this scene are so popular that they can become tedious. This however caught my eye and is superb, a slightly different approach stressing the light. 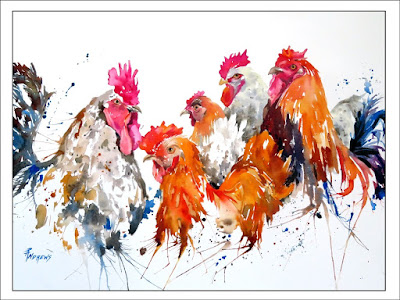 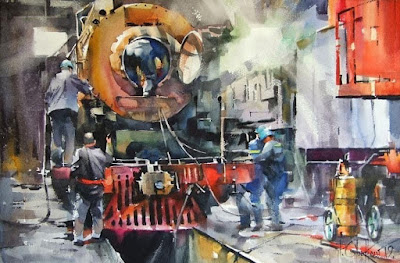 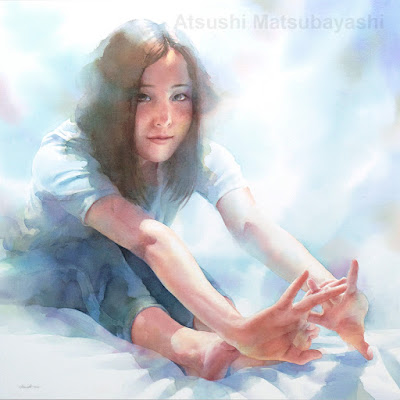 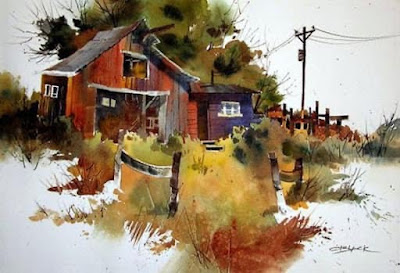 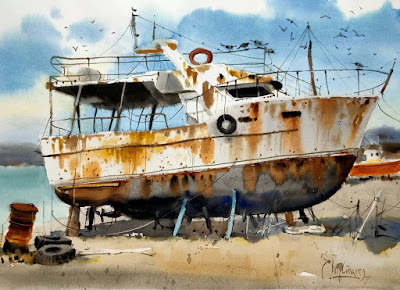 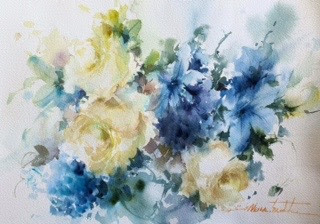 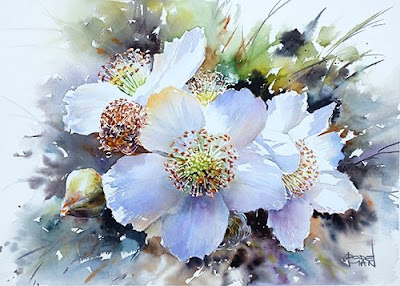 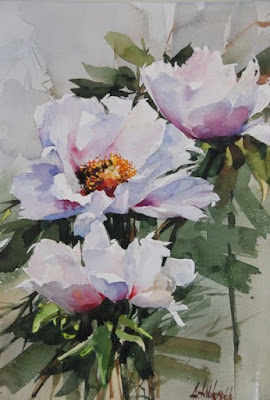 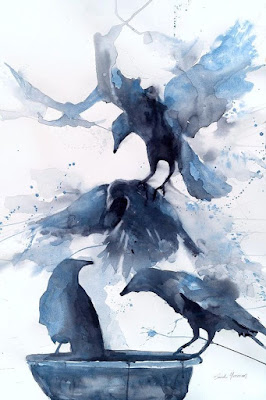 That's it folks hope you like them.
Posted by Peter Ward at 07:37 4 comments: