A few months ago I published  a swatch of various red/magenta colours. Bruce McEvoy of Handprint remains sceptical of the  lightfastness claims for  a number of reds and always suggest you do your own tests. Following his advice this is the result. 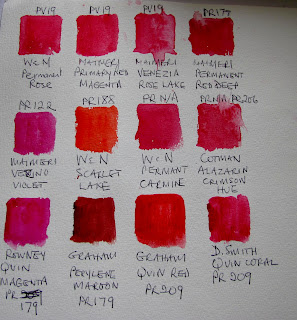 The swatches as originally painted 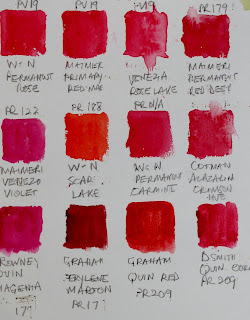 The same swatches after four months exposure in a south facing window. I put masking tape over the bottom half of the swatches so any deterioration should be in the top half. Personally I can detect either very little or no difference. You have to allow for the fact that reproduction may not be of the very best, but I have the original and looking at it reached a similar conclusion. I don't know what the optimum time scale is for doing such tests and I suppose they might well fade over a much longer period, but then again watercolours are not normally hung in south facing windows so make of it what you will.
Posted by Peter Ward at 01:17 3 comments:

Since returning from the Charles Reid workshop I've been pouring on the gas! I'm not suggesting what follows is good  - just my modest efforts. I've been trying to put into practice certain things I picked up in Cornwall. None of it is really new as I've been on three previous workshops with him. My feeling this time is that I was better equipped to benefit from the lessons learned and - maybe, just maybe - I can move my painting up a notch or two over the next six months. We'll see. 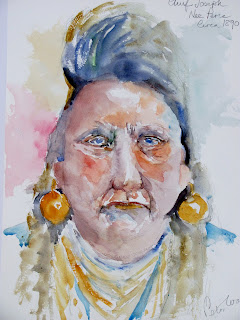 Chief Joseph - Nez Perce 15" x 11" Fabriano Artistico Not 90lb (200gsm).
I'm none too happy with the resemblance to the real Joseph as it isn't quite right, so will be doing this one again and will post a fuller biography if I manage to achieve success. 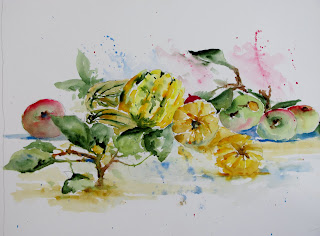 Autmn fruits 16" x 12" Centenaire 140lb (300gsm) Not.
This was the subject at a recent AVA Thursday morning workshop. I took along the apples with leaves and added the gourds that another member of the group had brought. As you can see I've gone for a colourful representation and used some of the Daniel Smith and Graham colours.
Quinacridone Gold (PO49) from DS and Hookers Green (PG7/PY110) from Graham feature but there are others. I like these colours very much although how much longer Daniel Smith will be able to offer Quinacridone Gold remains to be seen with no manufacture of the pigment since 2001 ( according to Handprint). The Graham Hookers is the most natural version I have come across, very dark at full strength.  Many Hookers tend to look artificial. Daniel Smith watercolours, if somewhat expensive, are available from Jacksons www.jacksonsart.co.uk/ and  Ken Bromley www.artsupplies.co.uk/  One or two other retailers like Pegasus Art www.pegasusart.co.uk/ are also stocking at least part of this huge range.
In their last but one catalogue Bromley made a big thing introducing both Daniel Smith and Schminke watercolours but the latest catalogue has no mention of either! Previously Bromley majored on Winsor & Newton with Rowney as a second string. Do I sense industry politics here or is there another explanation? I think I'll e-mail Bromley and ask them what is happening. Graham are only available in the UK from Lawrence of Hove www.lawrence.co.uk 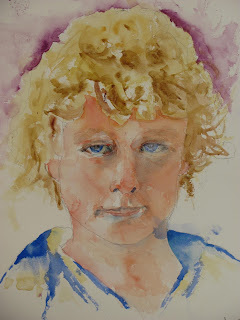 Harvey 15" x 11" Fabriano Artistico 90lb (200gsm) Not.
Harvey is my eldest grandson aged 7. This is quite a good resemblance but I've overworked , especially around the eyes. I will  have another shot at him soon. 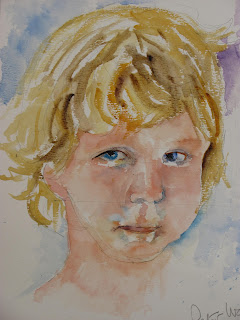 Mackenzie aged 5 - 11.75" x 15.75" Vivace Not. 140lb (300gsm)
Mac, Harveys brother, is my youngest grandchild and this has caught his likeness quite well. I'm not 100% satisfied ( I never am with good cause!) and will be doing further studies. The third grandchild Evie will be attempted very soon. About two weeks ago I took a series of photographs of all three with the object of turning them into portraits.  After Cornwall I feel more confident about attempting such studies. A friend who has painted many portraits tells me children are particularly difficult.

One departure with the latter paintings is the use of  an Isabey Kolinsky sable Size 8 series 6228, the one with the black handle with green tip. I've had it a while and in size by size  comparisons with Raphael and Da Vinci it was seen to be smaller - less hair in other words. Jacksons  offer this brush at £25.90 while the comparable Raphael and Da Vinci are £31.90p and £28.15p respectively. I have quoted the Series 35 Da Vinci but the excellent Series 10 is only £24.15p. I was already a big fan of the Isabey retractable Series 6201 Size 6, very slim but quite small compared to others in this size, and this 6228 is superb. It is long and slim, holds a good charge of paint and releases beautifully, very controlled. It is early days yet but my first impressions are very positive.
Posted by Peter Ward at 02:34 11 comments: