Once again it was off to Bath college. How time races on! This week was a repeat of last in that the same model and pose was the task. I made a hash of last week and was determined to do better. 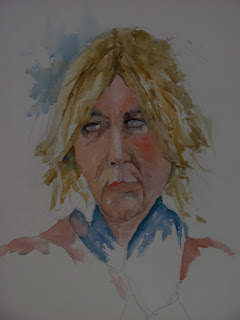 This is better than last week but still looks on the severe side. I am having difficulty in getting things right. I've never painted live models previously and it is a steep learning curve. It is actually easier just to do a drawing. Hopefully I'll come out the other end with improved tecnique. One thing that  has become even clearer is the importance of careful study before putting pencil to paper, avoiding the error of using your imagination rather than seeing what is actually there. Note Added 9/02/12. Actually I have painted live models previously on my four Charles Reid courses. One session on each  was devoted to this with Charles first demonstrating then off we went. The difference was that the models were closer and were more or less at eye level. It was also less formal. At Bath the model is on a small raised platform and as I don't paint standing up I'm tending to be looking up slightly plus the distance problem. I shall ponder these two factors and see if I can come up with a solution. Any thoughts anyone?

You can see the original photograph of Sarah in the week four post. I've taken more photographs and will probably have another attempt this weekend. When I was drawing and then painting, Jackie kept a close eye on my progress and pointed out several things that were not quite right. I don't think she was entirely satisfied even then as she is  a hard taskmaster but she hasn't given up on me yet!

The features were a mixture of Cadmium Red Pale, CadmiumYellow Light and Cerulean (W & N PB35) to darken, the hair almost exclusively Gold Ochre(W & N PY42) and Raw Umber with very slight touches of Burnt Umber. I used a 2B pencil for the drawing.The only brushes were the Escoda Series 1214 retractable Size 10 Kolinsky and the Isabey 6201 Size 6 retractable. Cerulean and Cobalt Blue Deep (Rowney PB72)for the scarf and a mixture of Permanent Carmine (W & N) and Cadmium Orange (Maimeri PO20) for the jumper. I deliberately downplayed them rather than fill everything in.

We now have a weeks break for half term before resuming on the 21st.
Posted by Peter Ward at 12:02

It sounds like you have a very good teacher, always useful when they keep an eye on their students, some don't and I always think what is the point of being there!..also like that you say what colours you are using, so nice to find new colours (oh more colours - most woman like shoes, I like paints)!!

Thanks Ann. Yes I think Jacky is a very good teacher with an impressive CV. She has her own website www.jackieharding.com

As for colours as an impulse buyer I have so many I don't know how to fit them in! I've been modifying my main palette today to increase the number from 16 to 22.

Just popped back to add that you are right to study the subject first...always give yourself a good 10 minutes before putting pencil to paper, but at least your model knows she is going to be stared at, otherwise you could end up with a slap! (laugh).

Fortunately all eight participants stare at the model, although I've been the only man during the last three weeks. The missing male is Neville who returned from India to find his house flooded, and a collapsed ceiling due to a burst pipe or tank.
Seriously though I know the theory even if I don't always follow it. It's a case of repeat after me 100 times `More study less haste'.

I love workshops and painting portraits. I think that your color choices are very similar to what I choose for skin color. I use a bit of an olive color as a shadow on fair-haired models.

One more comment. I scrolled down and saw the actual model. I would also use a clean plum color as an under wash on her eyes and a grayed down version on her neck as an additional shadow. Sorry if I'm being too bossy.

Thanks for commenting Artist. At the moment I follow the skin colour choices of Charles Reid but have been wondering about alternatives.

One problem with the photograph is that it doesn't represent clearly what I am seeing at the actual session. In the photo she comes across much lighter due - I think - to the fact I paint sitting down whereas the shot was taken at a higher level standing up and I used the zoom lens to get closer.

You're right about photos vs painting from life. I think just looking at the photo the models hair is more than likely a more delicate color in person. Still I think that what you are doing is exciting. Keep at it, you'll get where you want to be.

Thanks Artist. I am well into another painting of Sarah based on photos I took on Tuesday. So far I have completed her head, all that's left is the clothing and I don't intend to overemphasize that. So far I'm quite pleased with this latest version.

I love workshops and painting portraits.I think just looking at the photo the models hair is more than likely a more delicate color in person.

Thanks for commenting PP. Appreciate it. In the photo the models hair appears lighter than in reality, possibly because I zoomed in with the camera and so was much closer than where I sat to paint her in reality. Unless I'm seeing things I'm pretty certain her hair looks darker than in the photo. A puzzle and shows the difference between reality and photographic images.