The Mystery of Schut Watercolour Paper.

I have written about Schut before. I first heard of this Dutch company in a book by the late Zoltan Szabo. He mentioned Noblesse, which was the top of the range paper. Later I found that Judi Whitton was using blocks purchased from a small art shop in the Cotswolds. This may be where Charles Reid also heard of it as he tutored workshops in  the Cotswolds and Judi went on one. 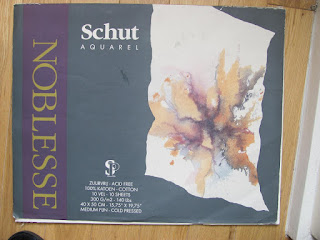 Prior to this Charles used Fabriano Artistico, which he said suited his painting method. By now thoroughly aroused  (!) I followed the trail and discovered an unusual small company near Banbury called Hookers Green was an agent and contacted them. It appeared to  be a private house but they also had a small warehouse. A single foolscap sheet was posted to me and it listed several different names including Noblesse, Vivace and Flamboyant. I purchased some blocks of Noblesse and Vivace. Noblesse is (or was) 100% cotton and Vivace a 50/50 cotton and synthetic mixture. I liked both but the difficulty in getting this paper was a problem. A follow up call to Hookers Green produced no result and they don't appear to be trading any longer.

The problems of getting these papers was such that I switched to Saunders Waterford, which is excellent particularly now that they do a "High White" paper. The problem we watercolour artists face is rising prices. Fabriano has gone up considerably and I never really liked the block size of 18" x 12" - my favourite being 16" x 12". In addition when you get down towards the last few sheets the blocks come apart. This doesn't happen with the Waterford.


With prices becoming more of an issue (I am painting on the backs of failed paintings of which I have many) I thought I would once again see if it were possible to get some Schut with Vivace in mind. Enquires brought the information that the Schut mill had been taken over by Clairefontaine and the Schut papers were being marketed in the UK under the Fontaine label. 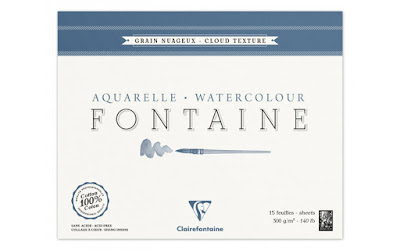 I'm assuming this is or was Noblesse. One surface offered is 'cloud effect' which seems to be new. This  is Noblesse. The not surface has a red boundary. 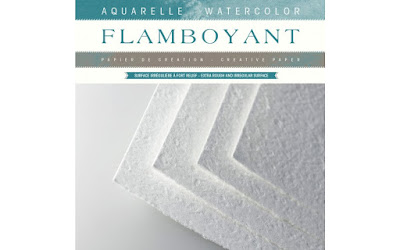 This is definitely Schut as Flamboyant is the old name. 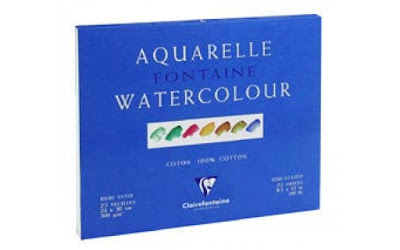 Not sure about this one. 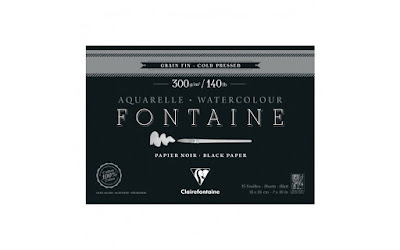 This is a new one - black watercolour paper.


Schut also did a nice 50/50 paper - a mix of synthetic and cotton - called Vivace. I don't see that in the Fontaine offerings so far.  A full range of sizes in rough, not and cold-pressed seem to be offered including blocks and sheets. The blocks are 15 sheets, which is a pity. as this makes the prices on the high side, although Great Art has some very keen ones at the moment. If you are interested you can follow up the above  with the major mail order specialists.

Added 11/01/20:  have received a message from my friend and brilliant artist Gerard Hendriks with a link to the Schut site. Unfortunately it is in Dutch! I can't see Vivace anywhere so maybe they've dropped this paper. It is infuriating when you get links to American companies - 3000 miles away - selling Schut papers but none in the UK despite close proximity to Holland. This was exactly the same when I attempted - successfully eventually - to get some Czech Moldau paper. This was such an ordeal I've not repeated it yet it was (and may still be) available via mail order from an American company! Frustrating indeed!!!

Added 12/02/20: Not being entirely happy that I was clear about the Schut situation I contacted the company again asking for clarification/ I have received a reply from a San Bates I quote " Regarding your question about Noblesse and Vivace, I can tell you that we no longer produce Vivace but that Noblesse is indeed available under the Fontaine name through Exaclair UK".

There it is then. I assume the top illustration is Noblesse. I assume Exaclair UK is a wholesaler.

REPLY RECEIVED FROM ARIE VAN BAALEN TODAY. "ALL THE FONTAINE PRODUCTS OF 100% COTTON ARE NOBLESSE". I THINK THAT CLARIFIES IT.

Finding the paper is a maze like priblem! I just looked and got a link back to Clairefontaine from https://exaclairlimited.com/brands/clairefontaine/
I'm not looking for the paper but having read your article my curiosity was piqued. My painting quality could look good on newspaper so I shall not be needing quality paper anytime soon! I hope you manage to sort out this dilemma😀
Don

Still not 100% clear what Noblesse is now called. I've asked for clarification but no reply bso far.

Sorry my mistake with the date.

Hi Peter, I’m very interested in this post. I bought some schut noblesse from a shop in Haarlem a few years ago, after reading about Charles Reid using schut. I thought it was a good watercolour paper. A while later, when I contacted a shop in Amsterdam (van der Linde), they told me that noblesse had been discontinued. But there was still a lot in stock in the USA. I visited Seville early last year, and found some blocks of noblesse in an art shop. I’ve toyed with the idea of importing more from the USA, but it’s quite expensive; I seem to recall that van der Linde also offered to send me their stock of loose noblesse sheets, but it was also very expensive. So, to hear that Claire Fontaine are now selling it in the uk under their name is interesting. However, I’m surprised that noblesse is the cloud effect: I have bought cloud effect recently, and it seems quite different in texture to me to noblesse. I have some older sheets of Claire Fontaine “Fontaine” cold pressed, and that seems more similar to noblesse than cloud effect, but it’s a few years old so might not be a fair comparison. Have schut ever confirmed that cloud effect is definitely noblesse? I can believe though that flamboyant is flamboyant! I’ve also wondered if Fluid 100 is made in the schut factory, as I think the description on Global’s website talks about a centuries old factory in Europe which resembles schut. Bobby

Bobby. The 'Cloud Effects anew surface introduced once Fontaine toolk over. Thr other surfaces - certainly the not - is Noblesse according to the company now nandling it. It is the one with the red borders.