Yesterday 10th January my long awaited portrait course commenced. This was from 10.00am to 12.30am and I travelled to Bath on the local X39 bus complete with backpack and assorted art materials. On arriving at the College, not far from the centre of Bath and conveniently close to the bus stop, I went into the Macauley building as previously instructed only to discover the reception desk was missing replaced with four chairs and a coffee table! There was no indication of what to do so after a bit of head scratching I asked an official looking lady, who happened to be passing - the place is  heaving - what had happened. She quickly explained that, as part of major restructuring and improvements currently taking place, the reception was now located in the Roker building and took me there. The Roker building is new and very impressive as was the new reception area complete with coffee bar. On enquiring and quoting my course number I was given a studio number and instructions how to get there. The place is like a maze and finding your way about is far from simple. By this time my fellow AVA artist Pat had arrived and we set off to find the room.  After travelling down various corridors we entered only to discover it was empty apart from a young man who was stacking easels. We were (as instructed) early but time progressed and when 10 o' clock arrived still nothing. To cut this short the young man went off to check, returned saying we were in the wrong place and took us there because it was another trek to find the studio. The staff at the college are all very pleasant and helpful but I'd been told it was pretty chaotic and so it proved.
After this unpromising start things took a turn for the better. The class were already at work, all present having done previous courses, and the tutor introduced herself. She is a mature lady and artist called Jackie Harding and couldn't have been more helpful. Already the previous bad vibes had been banished! She explained to Pat and I how things were done and we were provided with cartridge paper and various other bits and pieces to get us started. After selecting an easel and stool off we went.


There were eight on the course, as I've explained, the model was already in place (apologies to her I've forgotten her name already), and Jackie gave us a sheet of paper with a number of key points to consider when drawing portraits. I'll probably publish these in a future post. 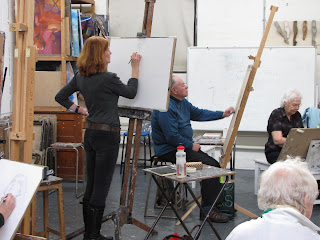 The scene when we arrived. 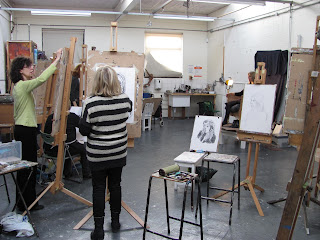 Another view, Pat in the striped top 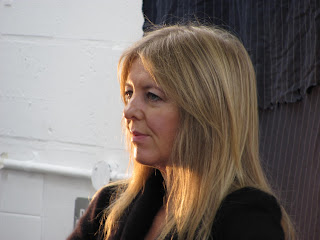 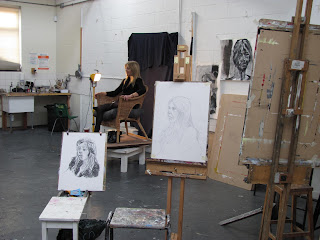 My easel to the right of and slightly below the model 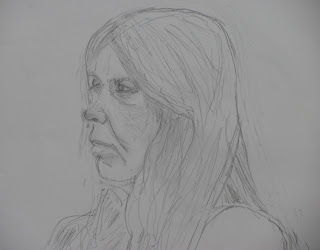 My Drawing. Graphite on Cartridge Paper.
During the first hour, until just after 11am, we completed our drawing. The model took no breaks  and never moved, obviously very professional. At 11am Jackie called a halt for a break and most took off to the coffee bar near the reception, us newcomers noting the return route to the studio!  After about twenty minutes we returned to find the model assuming another pose at a  different angle. 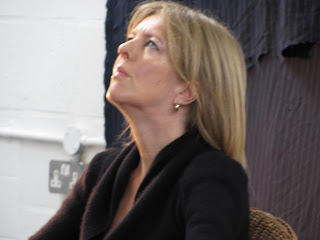 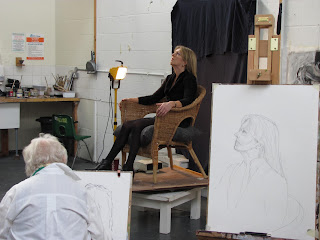 My effort on the right. This is full length, as was the other, approximately 23" x 16", cartridge paper, graphite and willow charcoal. For the drawing I used a Koh-i-noor mechanical pencil with a 5.6mm lead. 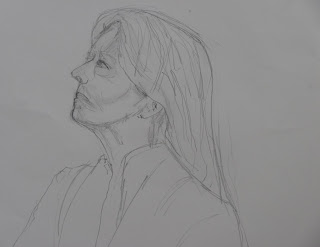 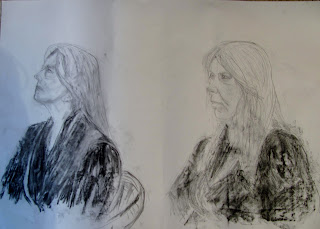 The Completed Studies - Remember they are just that! Graphite and Willow Charcoal on Cartridge Paper each approximately 23" x 16"
We finished at around 12.20 and I must say I thoroughly enjoyed the experience. I was pleased with my first efforts especially as it was all very new to me. As for me being the oldest student on the Campus, or in this class, I'm glad to say this was not so! I'm looking forward to future sessions which will vary with both drawing  and/or painting sessions.
A word about the tutor. I had never heard of Jackie Harding but  found her website www.jackieharding.com/Site/home.html  I thought she was excellent. She was quiet and unobtrusive but managed the class effortlessly and is obviously an experienced teacher as her CV indicates. After an initial  briefing for the two newcomers (Pat and I) we went straight into the drawing and she quietly moved around, occasionally suggesting improvements or corrections to individuals work. In this particular class 6 of the 8 members had been with her previously, some several times. There is a structured plan for the course and I'll return to it in future weeks.
Posted by Peter Ward at 03:53

The curse of Roker on all of those not subscribing to the true faith in NE football. Sounds like a really interesting session and you should be pleased with your work. Your portraits are really well drawn.

You mean to say there are other teams up there as well as NUFC? Howay lad!

It was great Mick. I was really uplifted by the experience.Looking forward to next week.