The unexpected death of Charles Reid has shocked his many friends, followers and students. 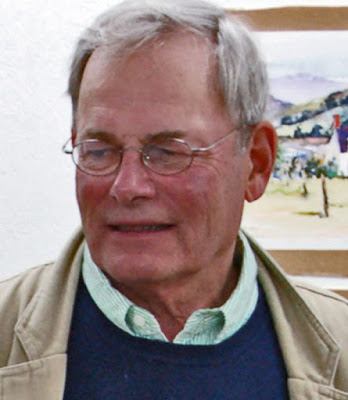 I first became aware of Charles Reid following an article in - I think  - The Artist magazine. It may have been associated with one of his books. Later I noticed Judi Whitton, a relatively local UK artist, had changed her style and it showed elements of Charles Reid. Later I did several workshops with Judy both plein air in the Gloucestershire area, then residential at Crantock Bay in Cornwall. She told me she had  gone on one of his UK workshops at Stow in the Wold and was so impressed with his fresh approach  she was influenced to alter the way she painted, which previously had been more John Yardley-like (who is a  personal friend).

Once I became interested I started buying his books and DVDs. My wife says when I get an interest I tend to go overboard! At around this time I had contact with Craig Young, from whom I bought some of his hand-made palettes and Craig told me Charles latest flower painting book, which followed an earlier one- the only book of his I don't have - explained all his methods in detail. I bought the book and the accompanying DVDs.

Around this time Craig had been organising Charles UK workshops, two consecutive weeks, bi-annual I think. I discovered on my first one that several of his regulars, who had been going for years, did both weeks, moving on to the second venue immediately afterwards.

I have written extensively of my experiences on his workshops, apart from anything else meeting some very interesting people including professional artists. I had intended for this to be more extensive but, when checking what I had previously written, realised I would simply be repeating myself. In addition what was previously written, especially about the workshops, was done so when all were fresh in my mind.

How did I rate Charles as a teacher? First of all you needed to buy into the Charles Reid  way. He began as an oil painter and taught at Famous Artists School in America. At some stage he was asked to do watercolour and knowing little or nothing about it transposed his oil painting methods to watercolour. He said some of the things he taught with watercolour were unusual compared to the prevailing orthodoxy. This of course was the attraction to many like me. He was quite candid that not everyone liked the way he painted, and joked  some people said he couldn't draw a straight line!

I regarded him as an excellent teacher always approachable - except when he was concentrating on a particularly tricky part of the painting when silence was golden. .We painted outdoors when the weather allowed and indoor subjects were still life's, portraits with a live model and old black and white photographs.
The initial drawing involved keeping the pencil on the paper all the time. He was very patient and talked continuously explaining what he was doing and why. He would go quiet when he was doing small detail or a particularly tricky bit. When he had his break he would wander off smoking his pipe. Sadly his pipe smoking apparently led to the pulmonary fibrosis which was the cause of his death. Actually I did not see him smoking much apart from when he had his painting breaks.

The things that burned into my brain from the lessons he taught included the following: You should be a little crude, mistakes are part of it, small details large generalities, try for a first time finish with little overpainting. This isn't all and my workshop reports go into more detail. One of the reasons I did the workshop reports was that I soon realised I was somewhat privileged to get on his workshops, especially in the UK. Many, many more artists would like to have done so but for different reasons couldn't.  His many books and DVDs are also musts and most can still be obtained with a little searching  although prices can be high on some of the books.

What were the best workshops I attended? All of them I would say apart from the last at Stow. The standard wasn't as high with ten new people on it, one of whom had never previously painted in watercolour. I was also involved in a fractious house move at the time and wasn't fully focussed. I had intended to show Charles how much my painting had improved since my first workshop but my paintings were generally poor, although I did partially redeem myself with a decent portrait on the final day.

Stow was the last occasion Charles came to England,  apart from an International Artists holiday arranged by Travelrite. I obtained details but it wasn't for me involving being picked up at Heathrow (!)  and travelling around in a coach with different hotels. I also felt after Stow perhaps I'd reached the end of the line.

Charles continued to be very active within America up until quite recently. I would love to have done one of his portrait workshops but he said I'd have to go to America.  On the last occasion I saw him I tried to persuade him to do an up to date portrait book.  He did  do a DVD called 'Figurative Watercolours' instead which was filmed after Stow.

My last word on Charles Reid? The well-known guitarist Chet Atkins, when asked what the attraction was of Elvis Presley, said 'HE WAS DIFFERENT'. That's my view of Charles. HE WAS DIFFERENT. Goodbye Charles you will be sadly missed.

Articles in the blog as follows.

The painting workshops I attended with Charles Reid were:

My wife went as a non painting partner to both Catalonia and Crantock Bay, spent some time with Charles wife Judy and thoroughly enjoyed the whole experience.

Thanks for your writings of Charles Reid, actually all of your experiences with him in the past. I am one of his fans and really admiring him as an artist and teacher, even though I am only learning from his books and DVDs. He will be deeply missed. You said that he was different, I would say, he was unique, he painted with honesty. His direct and fresh approach makes his paintings full of life, I can look at them forever, never get tired of them as they bring such a joy to life.

Thanks for comments Miguel and Lorraine.

Hi, can you provide the name of the latest watercolor book on flowers that details so Charles Reid's techniques? I have his book Watercolor Solutions. Do you think the flower book offers more insight? Thank you!

Hi JK
His second book on painting flowers was published in 2001 both in the UK and America. It's called 'Painting Flowers in Watercolour'. I originally bought it as Craig Young, from whom I bought some palettes, told me all his techniques were described in the book. Reid applied the same techniques whatever the subject. A DVD was released at the same time by Teaching Art (the SAA).