I was recently informed by a comment on the blog from Sebastien that a major revision of the Van Gogh range is taking place.  Added 11/12/08: Although I've still no acknowledgment from Talens to my FOUR e mails the new range colour chart is now on the Royal Talens website. No pigment details but colour swatches of all the new range. It's appeared in the last two days! Actually it's all a bit confusing. If you go to one part of the site following Van Gogh you get details of the old range of forty colours! 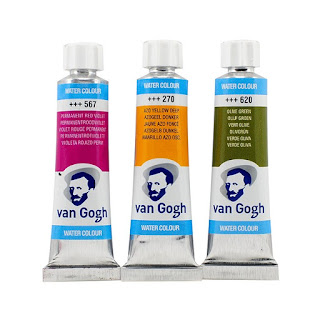 However when I went on the Royal Talens site there is no mention of this and the only information is about the current 40 paint range. Sebastien gave me a link which is https://issuu.com/royal talens/docs/vangogh_wtc which takes you to this site - not anything to do with Royal Talens as far as I can see - and there it was in all its glory? Full details including swatches, reference to the brochure etc.  I have e mailed Royal Talens three times - and just sent off another one, the result being a deafening silence, no response whatsoever. Maybe this information is supposed to be under wraps and has been 'pirated' before an official release date. On the other hand is it only intended for 'certain markets'.

What does this issuu site tell us? The new range is expanded to 72, a major change in itself, and includes four 'dusk' colours, 6 metallics and 6 interference. Remind you of for example Daniel Smith? The new colours include Quinacridone Purple Red and Blue, Lavender, Turquoise Blue and Green and several interesting others. A number of existing colours are 'improved (it says) and overall this is a considerable upgrade. Pigment details are on this site although very small and difficult to read. There are no Cobalts or, only alternative 'hues", and quite a few multi pigment mixes. Some interesting pigments though , never before seen in student mixes, like PV55 and PY129.

I've always rated Van Gogh and used them at one time. They are a mid-range paint (in my opinion), despite sometimes called student quality. However Royal Talens offer Rembradt as the artists quality with Amsterdam as the student range. Van Gogh comes in the middle.

When whatever is happening comes about and they become available in the UK I shall certainly have a fresh look as artists quality prices are eye watering. I just hope they aren't intended for certain markets like the USA where Winsor & Newton offer a much better Cotman range than the one on offer in the UK (and Europe). Please come clean Royal Talens.

This is what I read on the Royal Talens site: https://www.royaltalens.com/en-gb/brands/van-gogh/artists%E2%80%99-colours/water-colours/
I don't know how readily Van Gogh paints are available in the UK. But they mention 72 colours though.

Thanks Judy. I couldn't find anything on the Talens site other than the current range yet on the issuu site there are full details, brochure, colour swatches etc in great detail.

I checked one of the online art suppliers here in the USA and they were still only offering 40 colors from Van Gogh. I applaud the expansion of colors (I myself don't have the need for more than 15 colors on my palette) as it offers more choice to those who don't want to worry about mixing and just want the convenience. Van Gogh is one of the best "student" grade paints out there so I would hope that this makes people curious enough to at least give them a try.

My reasoning behind this is that "artist" quality paints are costing too much. My personal choice, Maimeriblu, recently went from 15ml tubes to 12 ml, while increasing their prices in the case of some tubes. While I don't have to scrimp and save to get artist quality paints (and I wouldn't do that anyhow) I'm at the point where I have begun to truly resent the whole artist vs student argument (seemingly most popular on a particular website). I even question the price of paper as too ridiculous. I decided recently to try some student watercolor paper and, using Cotman and Venezia (Maimeriblu's student brand) watercolors just to see if if I can get the results I want. In this I have been inspired by a painter I came across on Youtube, Patrick Ley-Greaves, who using Cotman and paper called called Jackson's Eco paper has produced some nice work. I guess for me it is the artist not the tools argument.

Sorry for the long reply to your posting. Your blog is always great.

Thanks Oscar. The Maimeri info surprises me. I didn't know about this tube size thing. Not happened here as yet but who knows. I think the makers are pricing themselves out of artists quality paints. Ridiculous. How can amateurs - the bulk of watercolour artists - be expected to pay these price however well-healed they are, and many aren't.

"How can amateurs - the bulk of watercolour artists - be expected to pay these price however well-heeled they are, and many aren't." I'm not well heeled but at this moment in my life when I have finally reached a point where I can afford to spend on artist quality paints, paper and brushes I've chosen to rebel and draw a line in my personal sand when it comes to prices. It's ridiculous as you write.

I think that being creative people, we can't help but be curious about our materials and that's what the manufacturer's count on. Witness the vast number of Youtube videos by amateurs where they sample various makes of materials.

And the artist quality vs student quality argument doesn't help. I've come across too many books published of late where the authors parrot the line about student paints fading over time, seemingly damning excellent paints like Cotman and Van Gogh by association (sure, some do, but, for the most part, fugitive paints are becoming a thing of the past). When I see that I can't help but think to myself that a buyer should forego buying the book in order to buy artist paints. Serves them right.

I have to say, you have always been fair minded about paints and materials on your blog. I like that you never dismiss anything entirely out of hand and I think by doing that you provide a great service to your readers.

Here is a link to the complete Van Gogh Watercolor range (72 colors) with pigment info etc and all the different sets available.

Hope its of use for you.

Keep up the good work with your blog and your paintings....

Thanks Mikal. I intend to buy some (selectively0.

Sorry Oscar. I missed the comment above until now. Always pleased with yopur contributions.