In my highlighting of  artists I now want to introduce a local one, whom I've met several times and seen demonstrate. I first heard of John Palmer via Judi Whitton who was using Papermate disposable pencils.  She explained that she'd originally seen John using them. John has this amazing and unique drawing tecnique. He doesn't have a website nor has he made a video. He did tutor courses at one time for EPC in Catalonia but doesn't feature in their current schedule. John is a member of the prestigious Bristol Savages and a full biography is  on the website. www.bristol-savages.org/current-artists/96-palmer-john-frederick-rwa-.html   Some of his paintings are also shown. Essentially his paintings are primarily drawings with a wash or two added, usually fairly nondescript. The drawing is the thing. His paintings have appeared in several books by other artists including  Judi's `Loosen up your Watercolours' (Collins 2005).
A friend of mine knows him well and suggested John should really be better known. He usually exhibits at the RWA (Royal West of England Academy) at their annual exhibition at Clifton, Bristol and also features in at least one gallery in Bath. 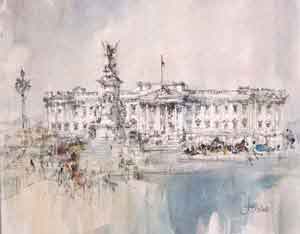 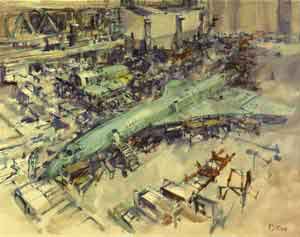 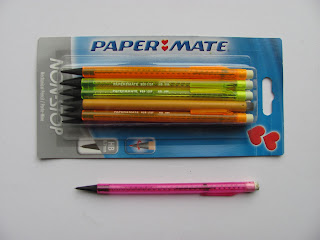 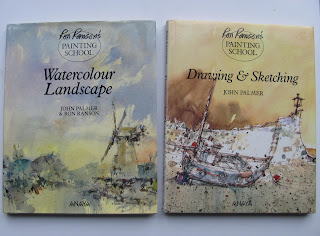 Fortunately there are two books, in the `Ron Ranson Painting School series' (Anaya Press 1993/4), that showcase John's talent. In my view by far the better book is `Drawing and Sketching' which is attributed only to John, whereas the `Watercolour Landscape' book is shown as joint authorship with Ron Ranson. The drawing book showcases his skills in amazing detail and I haven't come across another comparable artist. John is different! The Watercolour book, while interesting, isn't in the same class. When I originally tried to obtain these books, several years ago, they were hard to find but I eventually managed to buy the drawing book. Recently I felt I needed to revitalise my landscape painting and also look at other artists, even if very different to my `guru' Charles Reid. This is something he recommends. No tunnel vision here! I wouldn't try to emulate his style even if I could but there are things to be learned, as from many other artists, and who knows maybe a slight touch of the magic will rub off!
Both the copies I have of the above books are in excellent condition. I obtained the Watercolour book only recently with a slight hiccup, as the first bookseller could not find it, despite advertising on the Abebooks website. Fortunately a second did have a copy although at a slightly higher price. Prices vary enormously between booksellers and I've just checked Abebooks www.abebooks.co.uk , a brilliant website, and the Drawing book is available at 0.64p plus carriage from one or two UK booksellers rising to over £20 from American sources, while the inferior ( in my opinion) Watercolour book starts at £24 - £25 from the UK to over £65 including carriage from Canada. Note added 19/12: I've had another close look at the watercolour book and perhaps I should have been more positive about it. I stand by my view that his drawing book is superior but the second book has much to commend it.
To sum up I can understand some will look at John Palmer and think him quite tight and realistic - verging on super realistic at times. Actually this is a simplistic view as he is very versatile with often a loose impressionistic approach.
Posted by Peter Ward at 07:02

You're going to have to stop making these interesting posts that send me straight for the credit card. At this time of year I can't afford to read your blog.

64p and you can't afford it! The Papermates are only about 30p each. get your wallet out Mick! Happy Xmas.

Excellent post. I developed an interest in Mr. Palmer's work when I came across a mention of it at Judi Whitton's website. I found very few examples online but immediately fell in love with his work. I ordered his Drawing and Sketching book but still have not received it (any day now).

I really admire his vigorous approach to line work and his wash approach.

Welcome Oscar and thanks for commenting. You'll like the `Drawing' book. JP is a really original artist.

Just got my John Palmer book. I have to say I was taken aback because the examples in the book are much sketchier than what I have come across of his work on the web. Still, it's a lot of good information. I think I'll be dipping into this one slowly. I do like how he applies his washes. It's there to help set the mood and act as a support to the line work. Very glad I got the book

JP is an acquired taste Oscar. The Landscape book is even more `sketchy' because he produced most of them just for the book. They certainly are not ordinary `How to' books' and need to be studied carefully to get any benefit from them. His style is also very diffcult to emulate.

I did not know you had a second book!! I'm so excited!

Both the Palmer/Ron Ranson books are good - John Palmer is a very original artist. Try Abebooks for used copies.

We own two of Johns pairings and want to buy another we are in bath from California it is feb 2020 do you know what gallery in bath he shows at or how we could get in touch? 415-309-1266

Afraid I can't be much help. I haven't heard anything about John for quite a while. His paintings seem to be sold mainly at auction and I don't know of any gallery who sells them. Your best bet is to ask the galleries in Bath if they know him him. He is now 81 and may no longer be active as he did have one or two problems.

Today I was very lucky to find a beautiful John Palmer drawing/watercolour, about A2 size, framed. I found it in a local charity shop in Cornwall where I live. £15.00. The quality of the work just stood out although I didn't recognise the signature straight away. I've actually exhibited with Mr Palmer, as I regularly exhibit at the RWA exhibition in Clifton, Bristol. Anyway, I'm very happy with this find.