PV19 is one of the most important pigments for the watercolour artist and seems to feature in an increasing number of manufacturers paints, mostly as single pigments, but also in quite a few mixtures. This is an interesting pigment which is available in two major versions, Rose and Violet, but things become complicated in that there is also a `red' form not far removed from the Rose, all covered by the same PV19 designation. However a study of the palette choices of several well-known professional artists indicated it has certainly not replaced (for example) the fugitive  Alazarin Crimson (PR83) which is still widely used and only partially replaced by the `Permanent' version. Probably the best known PV19 paint is Winsor & Newton's Permanent Rose, a favourite of many flower painters. Winsor & Newton recommend Permanent Rose as the red  in a  three colour primary palette, although some other manufacturers tend to favour a magenta shade. 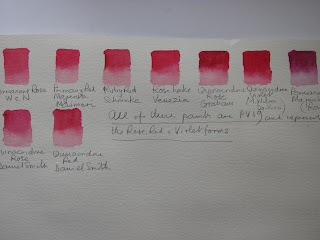 Above are nine different versions of PV19 which include both the Rose and Red shades and Violet. The only violet shade is the Rowney Permanent Magenta which is obviously different to the rest. Permanent Rose from W & N is the Rose shade, Primary Magenta from Maimeri is also the same shade, while Maimeri's Rose Lake is the Red shade. Schminke say, when describing their Ruby Red version that `different colour layers have a strong influence on character'.
In this instance I'll cover the Rose and Red versions, which are very similar and the Violet in another post. Quinacridone Violet (Gamma Quinacridone 1958) comes in deep red to violet-red shades depending on manufacturer. There are at least 20 pigment suppliers Worldwide and small variations may exist in the raw pigments they sell, while differences in the various manufacturing processes  also affect the final product. The red shade is warmer and darker than the Rose but I doubt most of us can tell the difference, more likely those between different makers. Although considered lightfast and semi-transparent Bruce McEvoy detected some fading after 800 hours exposure and suggests that variations may exist between the different makes on offer. He always says it is safer to carry out ones own lightfastness tests but I suggest only a few are prepared to go to such lengths. However it is rated, even by Bruce `Excellent to Very Good'.
To see what is on offer I looked at 14 leading manufacturers. The Australian company Art Spectrum and the American Da Vinci have the most paints with  five single pigment PV19's. Art Spectrums names vary from Spectrum Crimson to Rose Madder with four (or is it three?) Rose or Red versions. Da Vinci, possibly the most recent company to reformulate their paints have Alazarin Crimson (!), Carmine, Red Rose Deep, Permanent Rose and Quinacridone Violet as well as several mixtures including PV19. Of the 35 paints I identified only seven were called either Quinacridone Rose or Violet (mostly violet) with some pure marketing hype, `Genuine Rose', `Rose Pale Lake', `Thio Violet', ` Ruby red' etc.  The only company that calls it like it is  Daniel Smith with respectively Quinacridone Rose, Red and Violet. Surprisingly Holbein only market one colour Primary Magenta and so do Sennelier. I also note that Van Gogh offer Quinacridone Rose and Permanent Red Violet, Cotman Permanent Rose while Maimeri have Venezia versions of both Primary Magenta and Rose Lake. All this seems to confirm Bruce McEvoys assertion that paints should be selected by pigments not colours. There are two sources of pigment information, the manufacturer's website (usually) and that printed on the tubes. The latter is usually so small you almost need a magnifying glass.
If you wish to go deeper I always suggest the Handprint website www.handprint.com/HP/WCL/water.html Look under paints where very extensive information is available. If that is not enough try www.artiscreation.com. I would imagine these two sources are enough for most artists. I once again pay tribute to Bruce McEvoy of Handprint for his wonderful resource for the watercolour artist which I have leaned heavily on..
Posted by Peter Ward at 04:56

Thank you Peter...I enjoy your writings on color...you are much easier to read and digest than McEvoy.
Permanant rose is a favorite of mine, particularly to mix with cobalt or french ultra to make violets.
I rely on the combination of perm. rose, manganese blue hue (sadly not a single pigment any longer)and raw sienna to make beautiful grays.
American watercolorist Janet Rogers uses Rambling Rose(PV19 American Journey)for her florals. I think you would love her style, which she developed after C. Reid. Anyway, Rambling Rose is a bit pinkier and brighter than Perm Rose...very electric.
Carol

What I try to do Carol is simplify and make it more digestible, compared to the very detailed Handprint information, which can be hard to assimilate. Nice for you to indicate I may be suceeding.

I have looked at Janet Rogers work and like it a lot.

I believe the Cheap Joe range is made by DaVinci.

Hi Peter, I always read your pigment comments, but find it quite overwhelming that there should be so many things to consider before buying a single tube of paint. They don,t make it easy for us, do they. Its also an expensive hobby as it is, without buying tubes of various manufacturers just to test and find its not quite what you need. My paint box is already bulging withouit any more options!
Love some of your recent paintings. Thanks for sharing hem.
Yvonne

I concur that Bruce McEvoy of Handprint did some valuable work. However, he often borders with absurdity no sane artist can follow. He should get some life instead.

First of all, pigment ingredients inside tubes, together with their vessels, change, all the time. What's written on his website now, perhaps is not true in reality now because the world didn't stop revolving since.

Paint is not just pigment, it's also "how that pigment binds itself onto paper surface". If you have a good pigment but the vessel is wonky, too liquid, unstable, who needs it even if goes through 8000 hours in the full sun?

And every now and then (and today it's more now than then) whole ranges of tube colours are revamped altogether. Reformulated. Subtly, radically, we have no idea, because clear specs are never given.

It like toothpaste industry: "And now, ladies and gents, this incredible colour, with a new, improved formula!" (Insert a wide grin and jingle)

Only sense made of Bruce's website is to order pigment jars and start mixing watercolour paint like watercolourists of the 18th and 19th century did, using your own vessels and mediums. Perhaps then one should eventually reach the nirvana?

Ah yes, and finally, how many people ask themselves a much better question: is my painting so wonderful that I should be really worried about buying only best pigments that will torture audience during the next 2 million years?

And I bet John Singer Sargent asked himself that same question an his answer was a humble 'No'.

It can be overwhelming Yvonne but in the case of this important pigment it is complicated by there being three different versions. I find it interesting even if others don't (see next comment!).
Thanks for comments about paintings.

Wow you really got out of the wrong side of the bed today Rembrandt. Who are you criticizing Bruce or me? There is a great deal of interest in this subject and I also have the books by Michael Wilcox, who really started it all, and Hilary Page. My intention is to make the information simpler and more digestible. Nobody is forced to read it.

McEvoy isn't everyones cup of tea I agree but no one else has done what he has done even if he does, as you suggest, go to extremes. One correspondent asked him if he was insane? Was it you?

Thanks Peter, a good read.
I love Handprint too.. for the ones who likes go deeper than just paint.. learn about pigment and chemistry is always interesting.

And im so superficial, that i want the monstrosity of my paints to endure long, long time... and torment all the viewers in the next centuries, so i buy lightfast pigments too. :)

Thanks for visiting Crlos. I like to go deep too! each to his own I say.

Thank you once again for all the effort you go through researching all the info and put it in a very readable format.

Nice of you to say so Rui.Much appreciated.