This is the latest, and apparently the last book Ann Blockley intends to write. I have her 'Watercolour Textures ' (Collins 2007), which is quite similar except she goes even more abstract in this one. Ann was originally known as a very good flower painter and my sister, who lives not far from her, has two of her flower paintings. They are beautifully done but more realistic, although not botanical or super realistic. The interesting thing is the way she has changed direction, something her famous father the late John Blockley also did. John Blockley was in the same group of British artists as Seago and Wesson and considered an exceptional artist, who painted mainly landscapes and other outdoor subjects, often bleak ones with a predominance of grey and earth colours. Later he changed direction becoming much more colourful and became President of the Pastel Society.  She has also done something similar - although always colourful - in that her style has altered and her subject matter has widened to include landscapes and tree paintings. 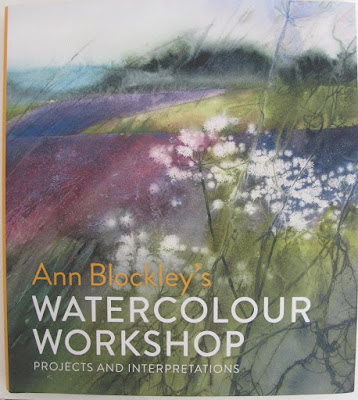 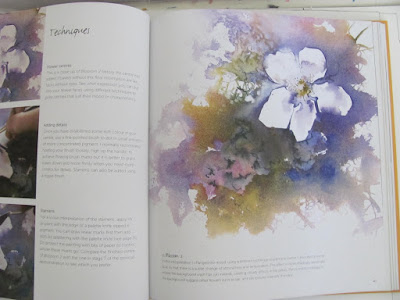 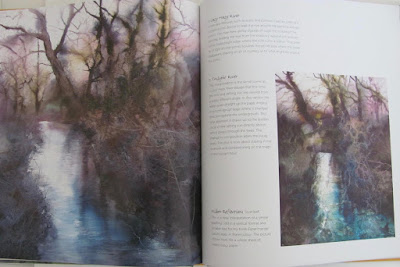 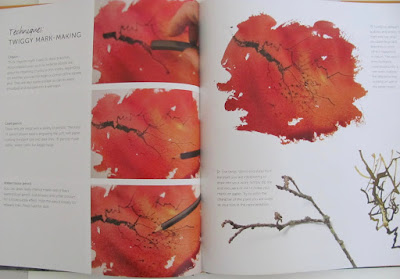 Above are typical examples of the projects in the book. The contents have a number of chapter headings as follows: - Getting Started, Flowers and Field, Trees and Hedgerows, Landscape Features and Towards Abstraction. She also covers materials, paints, paper and brushes but also other things like granulation medium, crayons, lead pencil, watercolour pencil, gesso and tissue paper, collage, pieces of card etc - in other words the whole gamut. including techniques and  how to use them. There are a number of projects which are on a step-by-step basis,

Some of my paintings friends, including Pauline who loaned me the book to review, and has attended her workshops, are ardent Blockley fans. I think her work is very interesting - really pretty amazing actually so this isn't a putdown, but you need to buy into it to benefit from this book. It isn't for the faint hearted or beginners, as achieving this level of expertise and the ability to emulate her work requires really hard graft and determination. Rather like my fascination with Charles Reid, which although nothing like her style and apparently much simpler isn't actually when you get down to it. It's taken me years and I'm still not there although, in each instance, I stress I'm not talking about copying exactly how these artists work but being influenced by it with your own input.

A nice useful book? Yes with the qualifications I've made.
Posted by Peter Ward at 09:27

Hi Peter. I am a big fan of Ann's work and have her two previous books that are in this style. I also have found copies of most of her father's books as well.

I loved this book. I was very challenged by things she said in the book - it has come for me at the right time. She gives some step by step, although honestly that isn't all that useful in her loose approach. Her own results would be different every time, based on how she handles the medium.

Her thoughts on how she approaches a painting, thinking about the emotions and descriptions of what she is conveying, were very helpful. She says at one point that the subject is watercolor not flowers - that thought really opened up my thinking and will really help me. Truly, my fascination is with what I can do with watercolor, not so much what I am painting.

She does have some good tips and tricks also...I am finally meeting with some success with cling wrap.

And, I believe she has another book coming out, a retrospective on her father.

And as you mention, although her work is loose and appears "messy" there is an incredible amount of skill behind it. Her work exploits her understanding of watercolor, ink paper, drying times, and very precise technical points. As well, her drawing skill is behind her ability to so briefly (loosely) convey the presence of a tree. It takes years to train the eye to see images in paint splotches and then emphasize them just enough.

Thanks for comments Rose. I think you confirm my view that you need to buy into this approach to benefit from it. It isn't isn't for the faint hearted or beginners. Much to be learned though if you wish yo go down this route

I've seen Ann Blockley's books here in the States and while they have a lot in them to recommend them I find that much of her work is like many others lately, in that it seems to rely a whole heck of a lot on "effects", rather than just painting directly. I've noticed this trend in several watercolor books that have come out. Maybe this is the new watercolor.

Nice to hear from you Oscar. Hope all is well with you. I have some sympathy with your comments here. I some years ago bought the Cathy Johnson book that detailed all sorts of 'special effects' and different 'tools' to use. It is easy to become hooked on this sort of thing so while I don't dismiss them I think they should be used with caution and moderation. Only for a specific purpose in other words.

Thanks Peter and I'm doing well, although, at present, part of me wants to chuck out the ancient drawing table I'm reassembling (It's about 90 years old, give or take a few years). Regarding many of the books published as of late, at least the ones I've seen when I browse through them, it does seem that "the medium is the message" rather than using the medium to make a statement. I also find that there is a trend toward "crafty" like watercolors. Maybe this is the new audience. I don't know. I do find that when someone wants solid information I usually point them toward books published in the past decade and even further back (I work in a library part time), including those of Charles Reid, Don Lawrence, Ian Sideway, John Blockley (those books he wrote are priceless) as well as a few others. But if it seems they want to spill paint and see what happens well there's the new crop of books...

It can go too far Oscar. When does it change from a meaning-full painting to a collection of special effects? There is a place for these things so I'm not dogmatic about it as I'm a believer in the 'there are no rules ' school of thought. Should I now put my tin helmet on? Just joking do what you want I say.

Just thought I'd drop a note. I happened to run across some Youtube videos featuring Shirley Trevena and Ann Blockley. I realized that perhaps I was a little too dogmatic (which now surprises me, considering I've always been, like you, a member of the "no rules" group). I saw thought and consideration in their approaches, not just throw paint for the sake of it. I wish I'd not posted in haste. So, there you go. I now fully reclaim my "No Rules" badge.

PS, I ended up getting a new drawing table. Nothing fancy, but it does the job.

Hi Oscar Ann Blockley and Shirley Trevena are two of the top watercolour artists over here. Very difficult to emulate though.