With the weather again inclement it was decided to repeat yesterdays subject of a Flowers/Still Life arrangement. Before going any further I should have explained that the way his workshops are planned is that Charles paints, demonstrates and instructs, while Jane and Judy ensure that things run smoothly throughout the week. This isn't as straightforward as it sounds. For example the caretaker had said we must not get paint on the carpet, although there were plenty of marks on it already.  This involved putting down sheets of cellophane and taping them together!

For the Flower subjects they arrived with an enormous bunch of flowers, a bag of fruit and some vegetables, the flowers then split and arranged into five separate bunches. When this was being done I commented to Judy about the preponderance of white flowers. This was when she said Charles likes painting them.

On this occasion he chose a different arrangement. You may note the other objects not just fruit. The duck is a regular as are some of the other items. 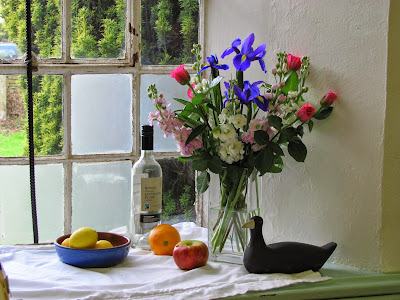 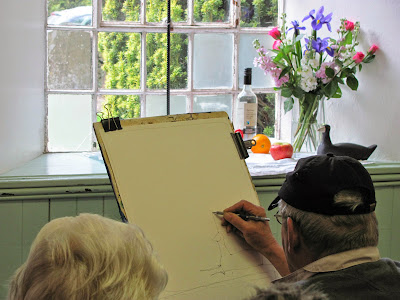 After the usual checking and re-arranging Charles commences the drawing.

Charles starts drawing with the duck. He draws the vase - inside first. Don't draw straight stems look for ovals. He said the place you start is not as good as the place you end up or vice versa. 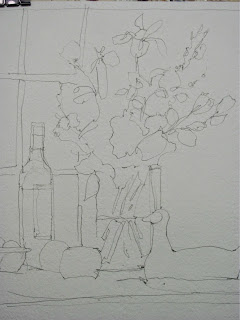 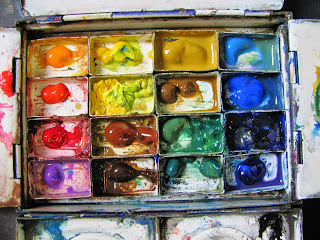 This was his palette for today with added paint. Compare it to yesterdays photograph. 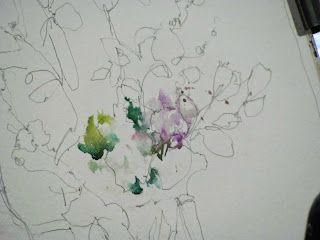 The initial application of paint which always begins in the centre by the rim of the vase. Note the Cobalt Violet.  Use single strokes and keep the brush on the paper. You thus start darker and end lighter. Vary the direction of your brush strokes. When painting the bottle the brush takes different directions. The colours on it are made up, Lemon Yellow and Cobalt Blue were mentioned. It isn't always easy to follow Charles as he often improvises as the mood takes him and is certainly not regimented in any way. 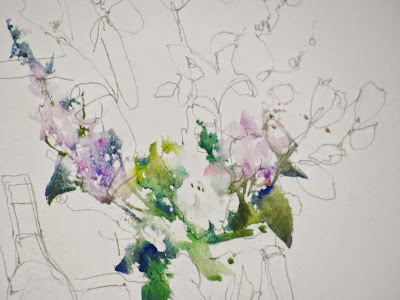 Things begin to take shape. Flowers are just indicated without any real detail. 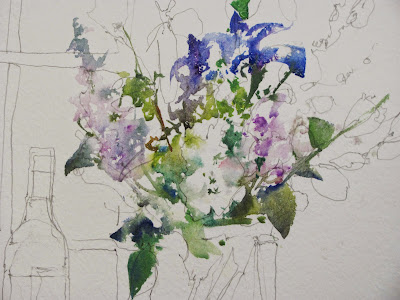 See how things develop. Note how the white flower is moved to just above the rim to break up the greenery. Charles always says don't overdo the leaves. 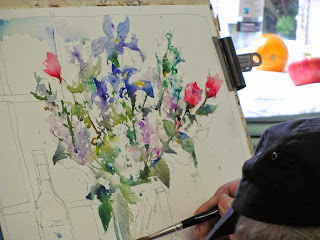 The flowers are virtually finished. 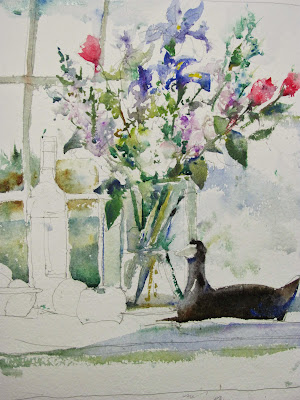 Not a great deal left to do. 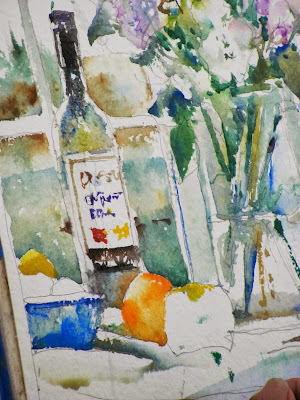 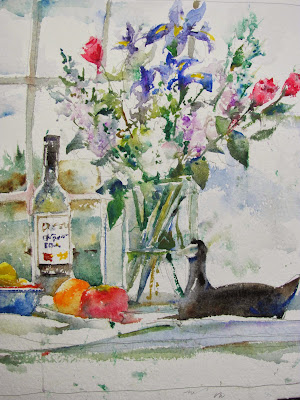 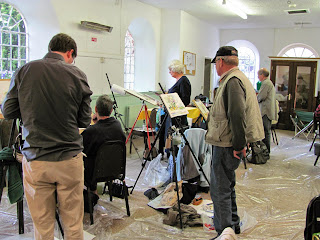 Following Charles demo a second critique took place in which students offered up another painting. Charles commented on each one after asking what the owner felt about it. We then broke for lunch and recommenced at 1.30.pm, everyone selecting a different arrangement to  previous. I did not have a good session and scrapped the first two attempts, one at a very early stage. I'm afraid I was somewhat distracted by phone calls I'd received on Wednesday afternoon from the estate agent involved in my house selling/ buying, which is causing a lot of grief, and lost concentration. That sounds like a cop out and probably is, although the painting I did then was better than on this day.

Painting carried on until 4 -5.pm with Charles supervising as you can see above. We then dispersed with the much awaited portrait session scheduled for the final day. After my poor performance so far I determined to finish on at least a higher note! One sad (but happy) note. Latifa Kostas, a Charles Reid regular for some years left at midday to return to London. We were told the following day that she now has another granddaughter! Latifa never paints between workshops as she says she is just too busy. Over the course of the week you can see how her painting improves and is much better at the end than the beginning. I noted this on previous workshops and have told her so. A salient lesson that painting regularly is essential if you really wish to progress.

Another excellent report Peter. Sorry about your distractions but glad you were able to keep your spirits up to record the day so well. Charles is still painting beautifully at 75. You were very fortunate to watch the painting emerge from the original blank sheet.

Thanks Ray for your kind comments. Makes doing it worthwhile. One of the advantages of painting is that most seem able to maintain it almost to the very end, I've seen two very well known artists painting when in their early eighties. I'm only slightly younger than Charles!

An interesting series of posts, this one especially. I often find it difficult to paint the delicacy and freshness of flowers. I will bookmark this to come back to when I need some inspiration.

Thanks Keith. Glad you like this series. I aim to give readers an insight into CR's methods.

A beautiful post, thank you for all the information. Wonderful progress photos!

Welcome Celia and thank you for your comments.

Hoi Peter,
This is an interesting and clear report that you made about this workshop and I think you have learned a lot of this great watercolorpainter ''Charles Reid''I read it with pleasure.
All the best,
Gerard

Thanks very much for your comments Gerard. Always appreciated.

many thanks for sharing, I love to see the progress , sometimes it is more exciting than the final version

have a nice day,
Nat

Welcome Natalie and thanks for comments. I think you are right - the progression of the paintings is fascinating.