This was my fifth Charles Reid workshop, set in the picturesque small Cotswold town of Stow - in - the Wold. Actually I wasn't over impressed with the town, as there were quite a few empty shops and in the Baptist Hall, where the workshop was held, spotted a professionally made sign advertising a `Food Bank', which apparently is held in the hall on certain dates. I have been to Stow before as I lived in Oxfordshire for many years but this was the first time I'd been there for an extended look.

This workshop was different as it was not residential, Jane supplying a list of local hotels, B & Bs etc. Charles, Judy and Jane stayed at the Grapevine and so did 6 other students, the remaining 11 spread around the town.. My sister lives only 30 minutes away at Ducklington so I stayed with her and commuted daily. You do lose something by not all being together and that made a difference. Unfortunately having to book well in advance for a large group, and prohibitive insurance costs, now that Charles is a  senior citizen, means that if he comes again in 2015 the same situation will prevail. 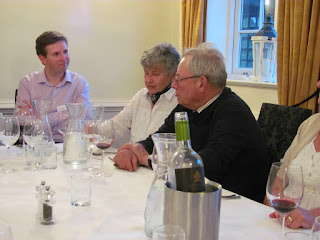 Prior to Monday commencement, on Sunday a dinner was held at the Grapevine Hotel and Restaurant on the high street, a short distance from the Baptist Church. There were 18 students on the course with Jane Duke, the organizer and herself a professional artist, on hand to organize things with Judy Reid. On this workshop two thirds were first timers, which is unusual in my experience, except perhaps in Spain. Actually I've since been corrected, 10 of 18 were new, not quite two thirds. My wife and some other non-painting partners went to the dinner.

Monday started with Charles demonstrating using an old black and white photograph for reference. This has become a feature of his workshops in recent years. 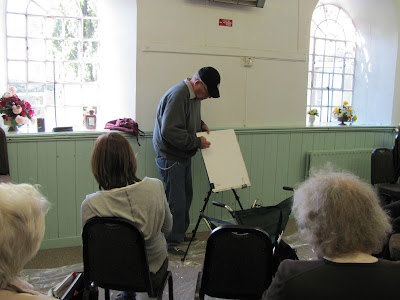 Getting ready to start. 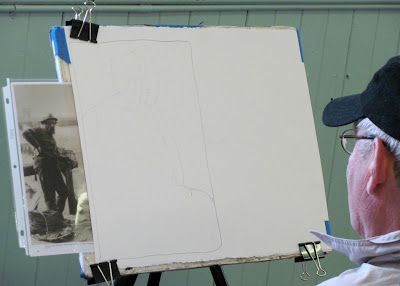 See the reference photo or rather part of it because it included a woman on the covered right hand side. Fabriano paper. 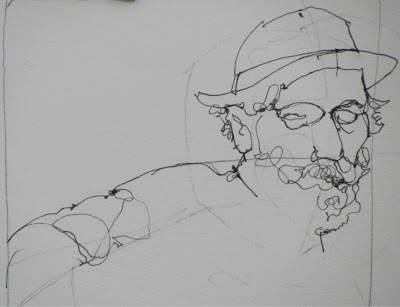 Charles started with his modified contour drawing using a continuous line and not lifting the pencil much. 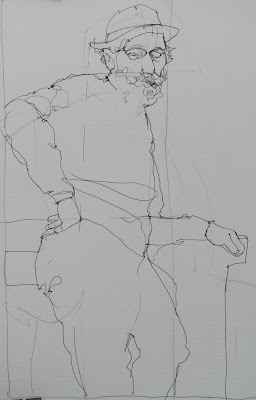 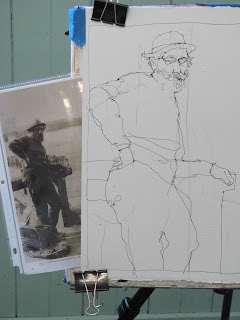 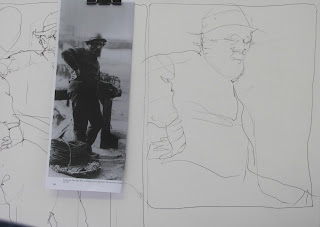 As you can see he divided his paper into two sections and did a second drawing in the right hand bloc, which is the one he painted. You may notice this is less detailed as it was the one intended to paint. Charles went into considerable detail for the benefit of the many `newbies'. These are most of the points he made:

* When painting a person make sure they fill two thirds of the area.
*Backgrounds are the hardest part of a painting.
*When drawing keep hand on paper, most action will be with the elbow.
*Draw light outline first then erase.
*Work from the centre of the face starting with the eye or nose.
*If you can't see something don't draw it.
*Forget about perfection.
* Take measurements using the pencil held vertically.
* If in doubt make figure longer not shorter.
*Keep measuring and comparing.
*Don't draw long general lines - show the bumps.
*Keep the pencil on the paper - short trips slow, long trips speed up. 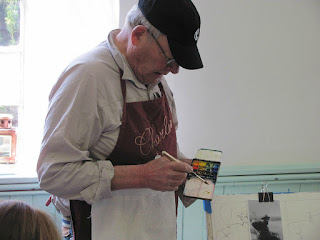 Charles used his small Sketchers box and is shown explaining to the eager throng what his 16 colours were and how they were grouped in the box. 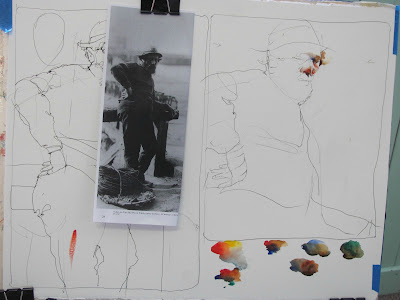 He started in the nose/eye area and you can also see some preliminary swatches at the bottom. Colours were his usual Cadmium Red, Cadmium Yellow, Raw Sienna or Yellow Ochre plus Cerulean and Cobalt Blue. Burnt Umber and Raw Umber may also have featured but I'm not certain. 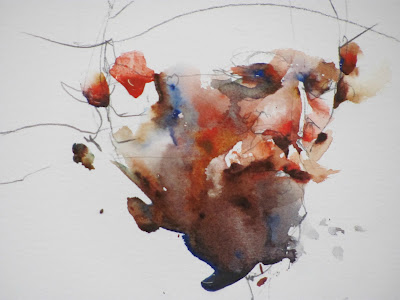 Here he has more or less completed the features and then down into the beard. Charles stresses placing paint rather than stroking and emphasizes the ratio of paint to water. Too many students have too much water and not enough pigment. When he paints he dips his brush in the water pot, then gives it two sharp shakes, and sometimes lightly wipes it on the small towel attached to his apron. He then goes to the paint which should be moist enough for the brush to dig into. He keeps the paint moist using a small spray bottle. Often he will then go straight to the paper without any mixing on the palette. Here again he made various points:

*Mix on the paper as well as the palette.
*Look for indications of lights and darks.
*Make very deliberate strokes.
*Soften paint edges using an almost dry brush.
*Have a 50/50 ratio of hard and soft edges. 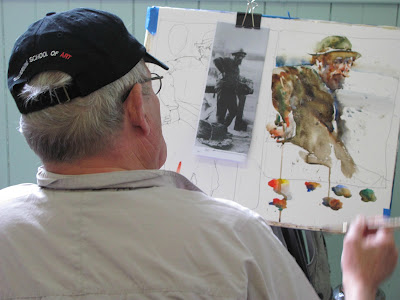 Not much left to do. 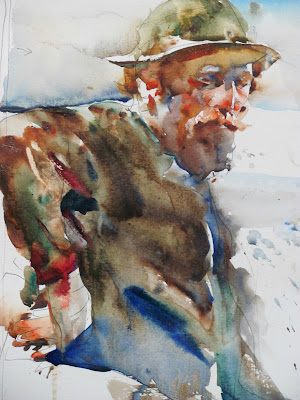 The finished work - actually he just decides at some point to stop rather than finish! On this workshop he was using a mixture of mainly Da Vinci Maestro 35 series and Escoda 1212 and 1214, the 1214s being retractable travel brushes. He thinks Escoda are similar quality to Da Vinci but they are generally two sizes smaller in other words an Escoda 10 is about the size of a Da Vinci 8.

As the weather was quite good, with  uncertainty about the remainder of the week Charles decided to paint outside in the afternoon. Students could either watch him or paint themselves. It wasn't a demonstration as such. He selected a small patch of grass with some trees and seats, just down the high street on the opposite side. He began on the left hand side by drawing the Royal Hotel (built AD947) and worked his way across the paper until he reached the edge using his contour technique. He didn't attempt to make a frame. He painted from the left hand side in a similar manner. Actually previously he has always said when outdoors draw a little then paint, draw some more then paint and so on. This time he continued until the painting was finished although he took his usual breaks, about every 20 minutes or so when he often smoked his briar pipe. As for his palette Cobalt Violet seems to now be a permanent resident and he also mentioned Cobalt Green Dark, which he said was a temporary colour he'd recently added. He does tend to experiment with one or two new colours each time I've seen him. I asked him why he had gone against his normal advice of drawing and painting in stages, the reply being `he just felt like it'! 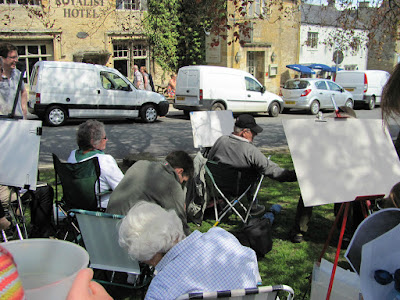 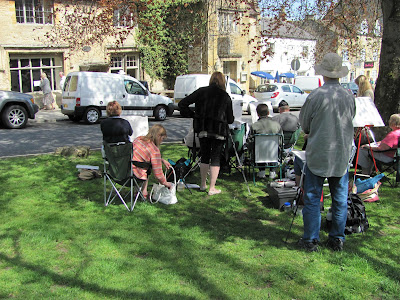 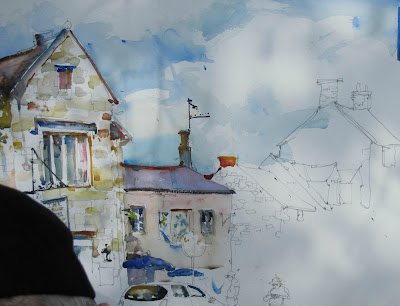 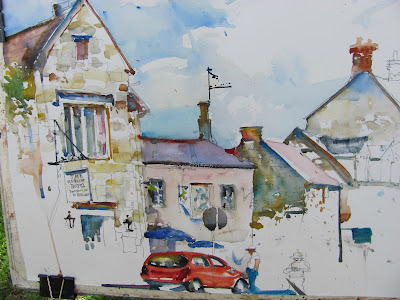 The photos of him painting are not terribly good. One major problem was that the sun was behind him and it was also slightly windy. As a result the shadows kept moving across the paper and attempts to photograph the various stages were ruined, as the camera autofocus was fooled and no one was able to produce viable photos. Those at the end were made by turning his easel around the other way out of the shadows. By then he had finished! I noticed that the painting was done like an inverted `V' with the bottom corners mostly blank.

I didn't paint at all on this day but contented myself with further study of how he does things. I think that's it for day one.

I really enjoyed this post on Charles Reid. Thanks for putting this descriptive entry together, Peter.

Oh... me too Peter... seeing the stages of the paintings was good too... thanks so much for sharing your experiences.

Thank you Peter for your excellent cover of the CR workshop. It was interesting to see the changes in CR's palette. Charles seems more concerned with the tone than the colour.

Thanks for sharing this wonderful experience! Amazing what that man can do!

Thank you all for your kind comments. I shall be posting the second part probably tomorrow then will follow on with the others.

This was my fifth Charles Reid workshop, set in the picturesque small Cotswold town of Stow - in - the Wold.
painters edmonton
edmonton painters

Ooooh - I've been waiting for these posts and you didn't disappoint Peter. I've heard about the brush shaking before. It's not something my other half is very keen on me doing in the house however.

And the photos - does he use black and white so it emphasizes the tones?

(btw I think Gexton is a spambot targeting painting blogs)

Thanks Michele. Charles emphasizes value rather than colour. He thinks black and white photos, especially old ones, represent a challenge with the stark contrast between black and white.

Hi Peter, What wonderful postings. I was on the Stow course and am really enjoying your blog here. I've shared it with Charles Reid fans on the painters online area of The Artist Magazine. You took a photo of me with Charles. When you've time, and I'm guessing this blog is keeping you pretty busy (!), I shall look forward to receiving it by email? All Charles' techniques and advice and beginning to 'kick in' this week as I absorb it all. Yours Lesley Birch

Thanks Lesley. I hope you pick this up. I sent the photos last Sunday and have checked that I used the right e-mail address, the one on your card. I've resent them today.