The SAA - the Society for All Artists - is a one-off in that. as well as being  an artists society,  originally The Society of Amateur Artists,  it's a large mail order artists supplies operation rivalling Jacksons, Bromley and others.  It has a large well illustrated catalogue as well as regular updates and special offers throughout the year. I don't know if it will supply outside the UK. It publishes a magazine 'Paint' for members who pay an annual subscription and get special 'member only " offers. Originally most of the cut prices were members only but this seems to have changed with a larger number available to non members. 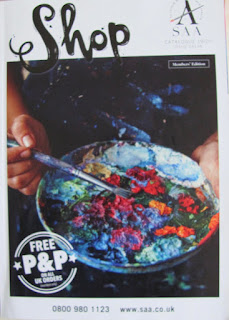 The non member prices were not competitive in most cases. Members enjoy the benefit of free postage even on one item. Artists societies can join on an affiliated basis, get members prices and also purchase things like public liability insurance when they hold exhibitions. My group Avon Valley Artists is affiliated and it is very useful in buying small quantities of supplies. At the moment they seem to be the sole mail order group who have the new Van Gogh watercolour range, and at very keen prices. They are also involved in various other associated activities and have a number of  artists linked with them.


My principal interest here is to examine the range of SAA  watercolours, which have gradually increased in number since being introduced some years ago, as an alternative to the increasingly expensive leading makes. I don't know who currently makes them but was told, not long after their introduction, that someone who had previously worked for Daler Rowney was the producer. 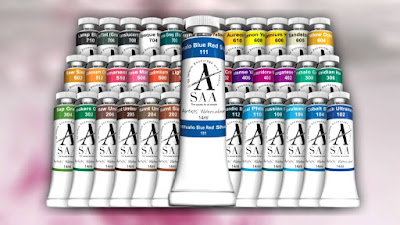 When first introduced there were 40 colours but this has gradually increased to 68 of which 33 are single pigment paints and 10 include white. As in all 'budget' makes the percentage of single pigment paints is lower than that of the majors. Price is a single very competitive £5.40p including Cerulean, the Cadmiums and Cobalts. One thing that did concern me when originally launched was that no pigment details appeared on the tubes. Approaches to them did bring a single A4 sheet with pigment details. When I decided to do this piece I approached them again and was very promptly supplied with an up to date A4 sheet. Due to the larger  number the details are very small so the magnifying glass came into play. You have to do this with many of the majors, although pigment details are normally on the websites as the details on tubes are so small.

Now to the individual colours. I stress I've not yet bought any from the expanded range but certainly am considering doing so. I as always consulted the Pigment Database (Artists Creation) the most comprehensive source of pigment details on the internet. Handprint has still much excellent information on pigments.

Scarlet Lake - PR12/PO31 .This is used with the addition of PO31. PR12 is described by the database as "Permanent Bordeaux - a bluish red synthetic organic. No other information. PO31 is "Bright Red Orange" NR (not rated)
Vermillion Hue - PR112. Napthol Red. Intense bright yellowish red, A synthetic organic "fair lightfastness" . When discussing red pigments Handprint suggested most reds should be treated with caution in this respect.
Poppy Red - PR4/PO13.  PR4 is described as "Bright Yellowish Red, Reddish Orange" - "The classic lipstick red". Now comes the catch "Not recommended for permanent art work". PO13 Benzidine Orange `'bright Yellow Orange"-" impermanent , might be a pigment to avoid". I must admit to surprise and concern when I read this, I stress this is the respected databases words not mine.
Cerulean Blue - PB35 Cerulean Blue.
Permanent Rose -PR48:2. Permanent Red, Yellow to bluish synthetic organic. There are 4 versions of PR48 varying in shade from bright to mid-red.
Cobalt Green : PB50. I suspect this is a misprint and it should be PG50? B is blue, G is green.
Rather than detail every individual paint a general summary:
I can find no information on Cobalt Blue PB26. I suspect these may be a misprint. Could be PB36?
PBr7 appears in a lot of paints, Burnt Umber, Burnt Sienna, Raw Umber as single pigment paints. This is the same as many majors. PBr7 has many versions ranging from Yellow Brown to brown to dull red.
PR101 Caput Mortem, Light Red, as well as one constituent of several mixed ;paints. Again a standard pigment, a synthetic iron oxide red in various versions with shades from brownish yellow to orange to red shades with yellow or violet undertones.
Prussian Blue is PB27, Tropical Phalo Blue and Phalo Blue Red shade PB15:1,
There appears to be 19 two pigment mixes, many with excellent pigments, and 14 three pigment mixes, again many with excellent pigments, which I'm not so keen on if used for mixing.  Although the majors have a higher single pigment number  they do still have some multi-pigment paints, apart from the Maimeri new range which  offers all 90 as single pigments. At a price naturally.
You could certainly try the Cadmiums, Yellow PY37, Orange PO20. Lemon PY37, Red PR108, Primrose Yellow PY83, Phalo Green PG7, Quinacridone Magenta PR122, Intense Violet PV23, Raw Sienna PY43, Yellow Ochre PY42, Lamp black PBr7,

The lack of pigment details on the tubes is a problem as far as I'm concerned but may not be to some artists. I've found even many professional artists talk about colours rather than pigments. You can always ask the SAA to send you the pigment details. I did. You could certainly put together a reasonable palette of Yellows, Reds, Blues, Greens and earth colours from what is offered.

Some of the artists associated with the SAA have tested these paints and given them fulsome praise. I haven't as  yet but will try some in due course. Poppy Red? Surprised about this one. Overall there are one or two issues but remember prices are one half to one third of the majors. I recently purchased two 14ml tubes of Winsor & Newton Mars Black and Aureolin for two members of my group. Even at the discounted prices the total still came to just over £25! This is the reality we watercolour artists face.