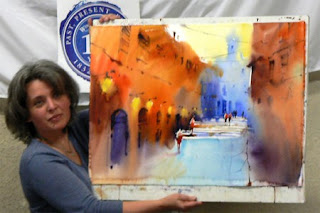 Viktoria demonstrating
The interest in this artist has been considerable, one of the most popular posts recently, and I determined to find out a little more about her tecnique. 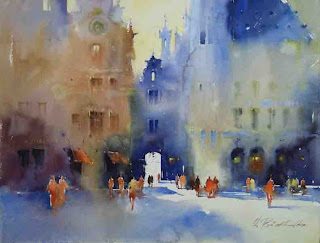 I've confirmed she uses Hahnemuhle 600gsm (300lb) rough paper which she lies loose on a plywood board. After an initial sketch with a soft pencil both sides of the paper are wetted with a sponge. She immediately dabs with a paper towel the focal point, approximately one third to two thirds vertically and horizontally, and some other places that are important in it's composition. Once she starts painting she varies the tone between warm and cool to determine relationships. Mostly she paints wet in wet but keeps the paper towels handy to dry off where she wants to place details. 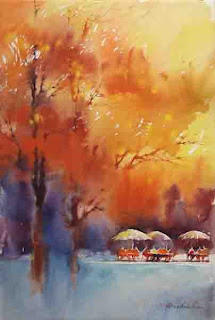 She uses a lot of pigment and a little water for the detail. Lemon Yellow is an important colour used to contrast with dark colours in the background. Apparently her people are always Lemon Yellow + Orange with some Ultramarine. Paints are `Russian' (St Petersburg?) and Scminke. This is logical as she is originally from the old Soviet Union (Moldavia) and currently lives in Germany. She uses 3 - 4 colours up to a  maximum of 5 for each watercolour. Colours are Orange (Scminke), Ultramarine, Violet, LemonYellow, Green Gold.  I'm amazed at this with the riot of colour she creates. Looking at her paintings it is difficult to reconcile some of the above, at least on some of them. This additional information was obtained from a piece  on his website by a Dutch artist Dominiek Reynt Jens, who attended a course in 2009. 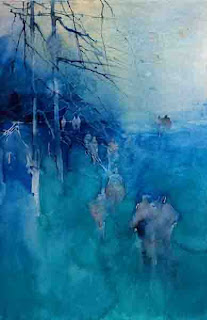 Nothing much to add on brushes which are described as `Da Vinci-type filbert sable in thickness and type 30/20/15/10 (broad brushes with fine tip) and a fine tug for details'. Quite what a `tug' is I'm unaware - could it be a rigger? Note Added: 01/05/11 .I looked up `tug' and eventually found someone selling them. They appear to be riggers. 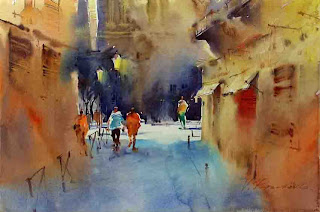 Although virtually unknown outside the continent of Europe she is a very highly regarded and popular artist. Although her approach couldn't be more different than the path I am currently (trying) following I think she is a fabulous artist and should be better known outside her home turf. Do look at her website which is also for her husband ( I presume) Slawa. I am on the track of more great European artists and hope to feature others in the coming months.
Once again I make the proviso that I don't actually have permission to show the above paintings but as I am promoting the artist and have no commercial gain in mind hope this is okay. I will remove the material if asked to do so. Her website gallery is: www.prischedko.de/
Posted by Peter Ward at 04:28

Hi Peter, what a wonderfull post (im CarlosBS from WetCanvas)

I dont understand when you said "She immediately dabs with a paper towel the focal point" what this means (i speak spanish better :P)

PD You really are passionate about watercolor dont you? amazing blog

Nice to hear from you Carlos. Thanks for visiting. What I assume Viktoria means is that after she wets the paper all over, the small areas of detail, which she refers to as focal points, are dabbed with a paper towel to almost dry so she can put in the detail without it dissolving into a shapeless mess. Does that answer yor question?

Now i see! yes Peter, thanks for the clarification..
Best Regards...

THanks for commenting Tina but I don't understand the point you are making. Joseph Zbukvic wasn't mentioned by me. His paintings are different. I think both are terrific artists.

Ah I see where the comment came from. This `Anonymous' post with no name attached. I hadn't picked it up for some reason so didn't reply. As you say JZ doesn't utilize colour in the way that Viktoria does.

Really appreciate your information on Victoria - I can't find much else out there and I also love her work. Thanks for blogging this.

Thanks `art alive' I have done something on the Prischedkos prior to this one.

Any new info on Viktoria? I've tried to emulate her style but have not been happy with the results. Would love to see a video of her in action.

No nothing recent. As far as I'm aware she has never made a video and hasn't written a book.

There is indeed a strong similarity in style with Joseph Zbukvic.

Indon't see that at all, especially regarding both artists use of colour.

If anyone is interested in her kind of technique it sounds similar to that of Konstantin Sterkhov. He has a Masterclass on the Nevskaya Palitra channel on YouTube. Very different subject matter but the wet it down dry it off method shown in detail.
Cheers,
Melusine

Thanks for that Melusine.

Wow, I'm surprised that Prishedko uses rough paper; the way her paints seem to flow on the page I always suspected she might be using hot pressed paper.