The Avon Valley Artists autumn/winter programme is in full swing and the following paintings have - mostly - been painted during these sessions. I was in two minds as to post several because they are not, on the whole, anything special. I'm beginning to think I'm regressing with increasing age and painting less than previously. I read somewhere that you needed to paint at least three times a week to stand still and recently I'm down to two. 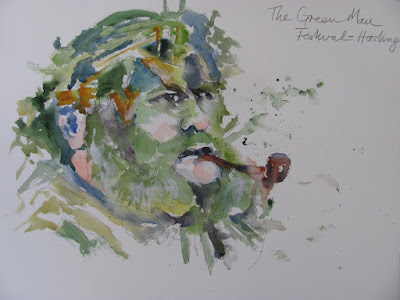 This was another painting from the Green man festival. An old Pagan ritual at Hastings.The first one I did is much better. 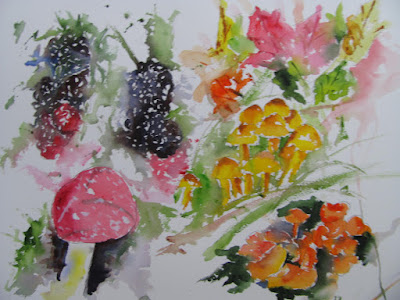 Here I combined fruit and fungi in a sort of collage. I quite like this for the colour, 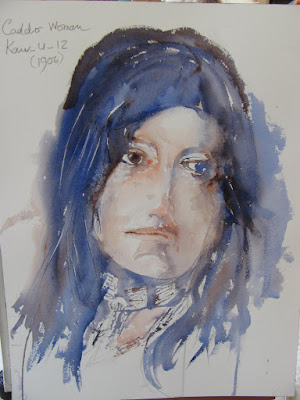 This was my own subject mainly painted at home. This one I rather like. 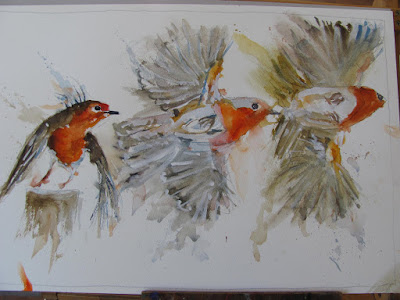 The guide photo used the photo  technique whose name eludes me at the movement. It is the same bird obviously. 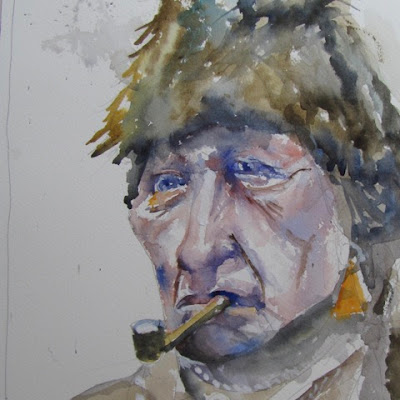 The American North West Coast spreading - at the top end - into Canada, originally contained over 150 tribes, many less than 1000 people. The majority are on the Canadian side where they have survived rather better than the American tribes. Some have disappeared forever but the remainder  seem to be thriving and have adapted to 'the white mans ways' while still retaining their identity and culture. I saw two TV programmes about them recently and subsequently bought a book called 'A Guide to the Indian Tribes of the Pacific Northwest ' by Ruby and Brown.

Perico was a relative of Geronimo and part of his band, the last hostile Apaches to surrender in 1881 thereby bringing an end to the Apache wars and indeed, apart from as few other incidents elsewhere, the Indian wars. There was trouble of sorts for some years, indeed decades afterwards, but on a smaller scale.

We were only allowed two colours for this one and I chose Turquoise (Lukas PB16) and Schmincke Translucent Brown (PBr41). For my inspiration I looked at  Agnes-Cecilles's work.

'Experimental' Black and White with one other colour painting on newsprint approx. 16" x 12"

The subject here was to cover the paper with newsprint, either pieces or larger bits. I did the latter and we were to use black, white and one other colour. I chose Cadmium Red Light and attempted a sort of 'pop art' result. It took 20 minutes.

This was not a subject just me. The hat and eyes are not quite aligned, with the eyes too far apart. Careless!!!

Another Indian brave in my continuing attempts to portray them. A bit muddy and the cheek on the right hand side is not right.

Posted by Peter Ward at 09:23 No comments: Links to this post

Rembrandt ( Royal Talens) the Dutch company, now owned by Sakura Color Products of Japan, was started in 1899 by Martin Talens as the 'Dutch Factory for Paints, Lacquers and inks', located in the  city of Apeldoon. In 1949 the 'Royal' designation was awarded, In 1963 Van Gogh (40 paints in pans and 10ml tubes) were introduced and Amsterdam in 1976.

Just to explain Rembrandt are the artists quality range, Van Gogh a middle range and Amsterdam the student quality. Van Gogh is therefore in between and an excellent choice for those who don't want or cannot afford the dearest artist quality.   From amongst the 40 colours a very acceptable palette can be put together which would suit many people. 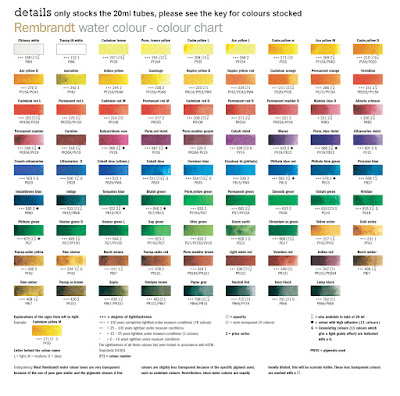 The Rembrandt range comprises 80 paints of which 53% are single pigment.  All the colours are there and good pigments feature.   Apart from two fugitive paints using PR83, Madder Lake Deep and Alazarin Crimson, which are identified as fugitive, all others are said to be excellent in this respect. PY184 -Permanent  Lemon Yellow - however is rated by Handprint as fugitive, but then he has questioned the ratings of several paints in other leading makes. What does Handprint say about them?

"Rembrandt paints are relatively inexpensive and of very good consistent quality". His criticisms are.... 5 pigments are involved in 37 different colours... too many mixed hues... an economy brand`'.

Other reviews I've seen have been favourable giving them top marks and they are certainly superior overall to student quality ranges - so too is Van Gogh. I have said before however that there are many decent paints to be selected from amongst Cotman, Venezia as well as Van Gogh and the own brand makes are also worth investigation. The artist Trevor Chamberlain commented in his book, 'Trevor Chamberlain - A Personal View',  that he had found a really good Viridian, after trying many others, made by Talens. I actually bought some after reading this but wasn't especially enthused, but who am I to disagree with such an accomplished artist. 80 is a goodly number and nothing is really missing. See for yourself in the colour chart above.


Whatever Handprint says they are used by many artists in Europe and available from most USA online companies.  Gerard Hendriks, the Dutch master, uses them and look how colourful his paintings are. Indeed they are marketed as 'Professional Quality', which has to be taken with a grain of salt in regard to some makes, but I am sure is reasonable in this instance. 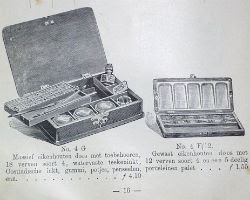 The Van Gogh range - 40 colours in half pans and 10ml tubes.

Rembrandt are available in both pans and tubes plus box sets. Tubes are 5ml with 40 colours  in 20ml. Not everyone stocks the 20ml and indeed Jacksons are selling them off 'while stocks last'. The only one that seems to sell the full range of sizes is the SAA  (Society of All Artists ) and you have to be a member to get the best prices. Jacksons seem to be dropping the 20ml size which is a shame. In the 5ml size the Cadmiums, which Handprint praises, only cost around £3.20 so are excellent buys if you only use them sparingly.  In fact this applies to many colours apart from the staples. The 5ml prices are very good. I certainly regard them, in terms of quality and price - which are the criteria I use - in the larger 20ml size as a 'best buy'.

In conclusion I think Rembrandt are well worth consideration apart from the tube sizes which are out of line with most others. It would be better if they offered  either a 15ml tube size or a larger range of 20ml. Based on the current 20ml prices from the SAA, ranging from  £6.55 to £9.75, they are a top buy. My main gripe is the poor availability in the UK of the 20ml size. Even Great Art  only do the 5 ml size. This doesn't appear to be a problem in the USA.

Here is the latest batch of downloaded paintings for this month. Actually more than usual - a bumper lot! Naturally not all will appeal but there should be something for everybody. Many of the artists are unknown to me but if you wish enquiries via Google should bring more information on the majority. 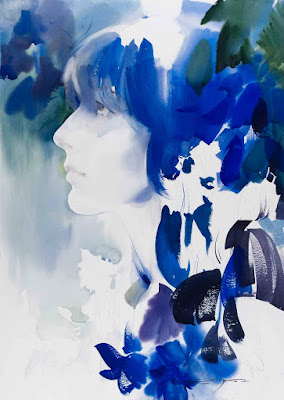 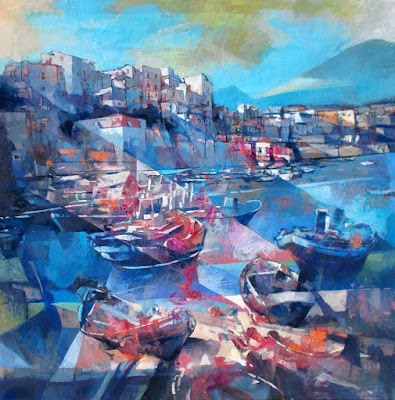 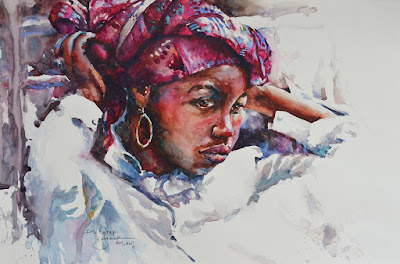 Bev Jozwiak - as brilliant as ever! 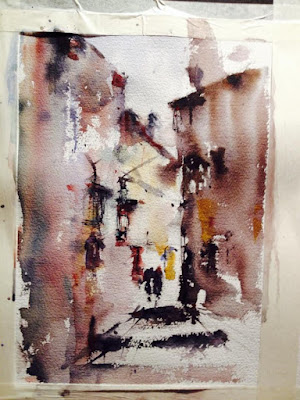 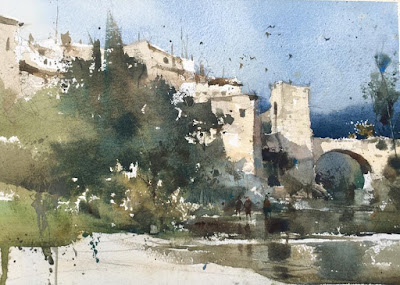 Chien Chung Wei  - this is a demo painting on his EPC workshop in Catalonia recently. 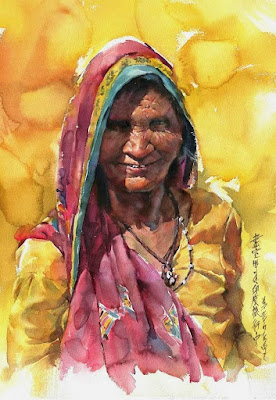 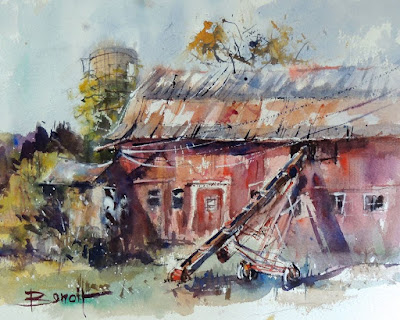 Dianne Benoit - my kind of Artist. 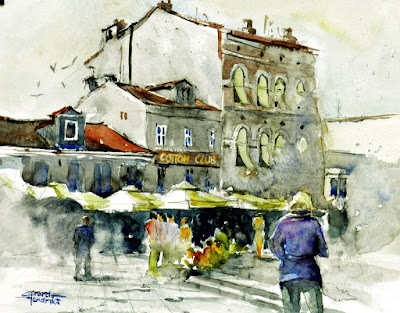 Gerard Hendriks - even more my kind of Artist and a marvellous man. 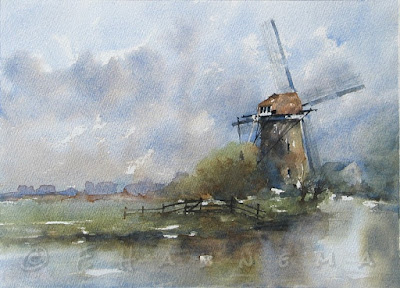 Edo Hannema - This may not be the final version but I like it as it is. 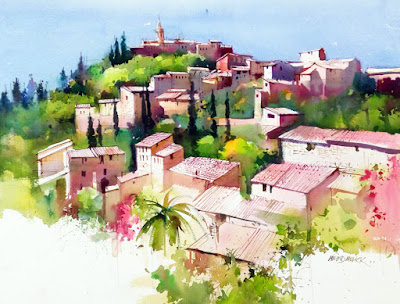 Milind Mulick - brilliant as ever. 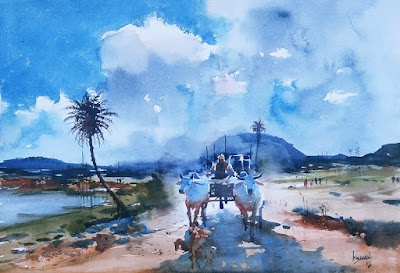 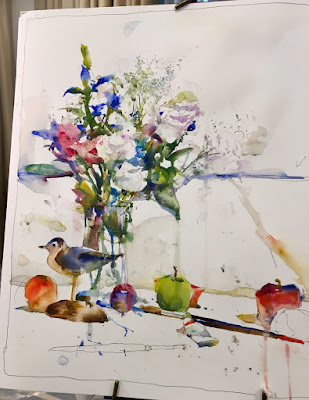 A very recent Charles Reid demo at one of his American workshops. 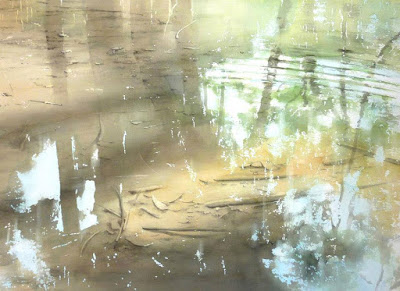 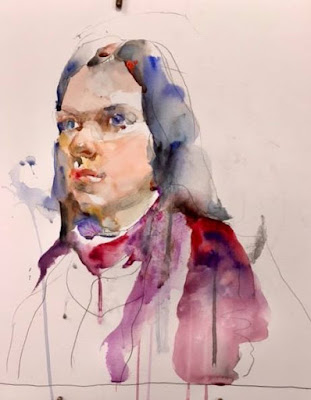 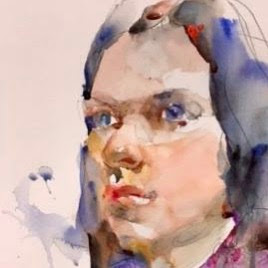 A closer look at the above. 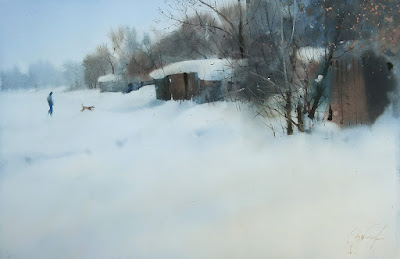 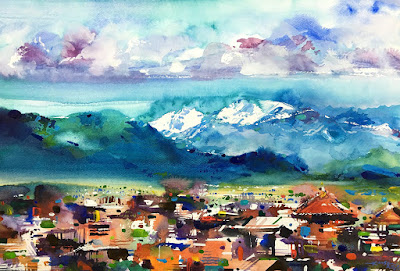 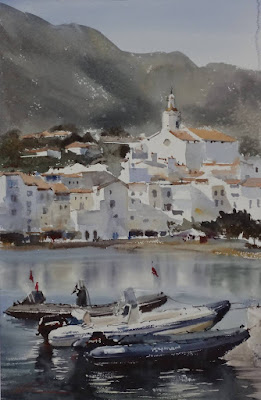 Galina Gomzina - not sure if I've got this right? 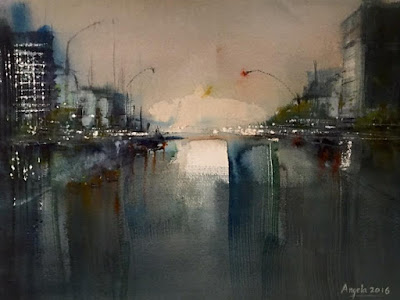 Angela Barbi - Angela a delightful lady who I had the pleasure of meeting when I attended her EPC workshop with Charles Reid a few years ago. A memorable experience which both I and my wife, as a non-painting partner, will treasure in our memories.

That's it folks. Once again I marvel at the wonderful artists out there who paint in watercolour.
Posted by Peter Ward at 04:19 3 comments: Links to this post